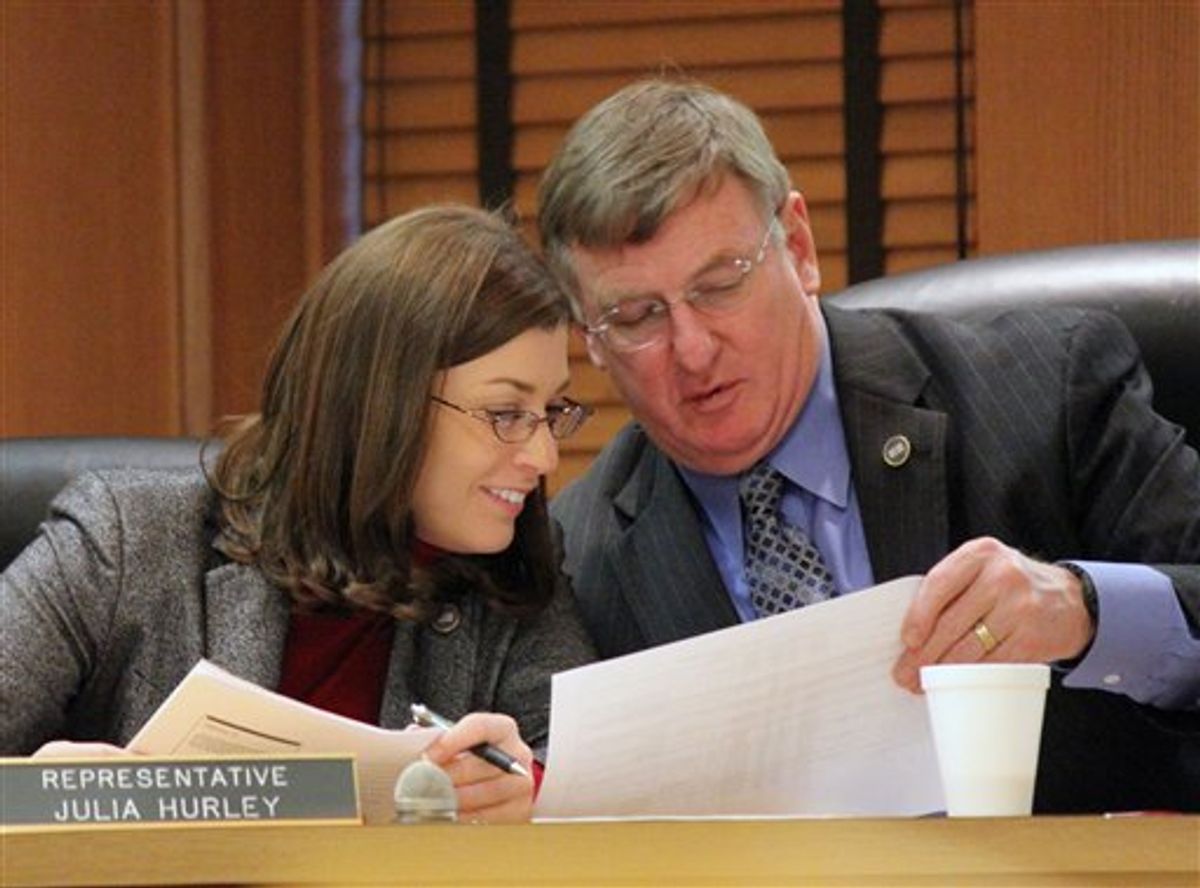 Rep. Julia Hurley of Lenoir City speaks with fellow Republican Rep. Tony Shipley of Kingsport at a committee hearing in Nashville on Tuesday, Feb. 8, 2011. Hurley, in the latest edition of Hooters Magazine, attributes her business and political success to her time working at the restaurant chain known for its waitresses' revealing outfits. (AP Photo/Erik Schelzig) (AP)
--

A newly elected Tennessee legislator writes in the current issue of Hooters Magazine that her experience working in the restaurants known for waitresses' skimpy outfits led to her later success in business and politics.

Hurley writes that her experience at Hooters helped prepare her for a run for public office -- even when opponents tried to make a campaign issue last summer about her past employment and photos from her modeling career.

"I have taken quite a bit of flack from the public at large during my run for State House in Tennessee for being a Hooters Girl," she said. "But I know that without that time in my life I would not be as strong-willed and eager to become successful."

The link also became a direct benefit to her electoral bid when former regular customers made campaign contribution "without question or hesitation," she said.

The article appears in the magazine's "Orange Pride Spotlight," which features "the success stories of Hooters Girls both past and present." Much of the rest of the magazine is devoted to full-page photos of women posing in bikinis and Hooters uniforms. A spokeswoman for the Atlanta-based restaurant chain did not return a message seeking comment.

Hurley now works as a consultant and entrepreneur. She is a Southern Baptist and a member of the National Rifle Association and the Gun Owners of America.

Her House bid last year was her first run for public office, and she told The Knoxville News Sentinel during the race that her top issues included reducing illiteracy, creating jobs and filling empty retail space in her district. The General Assembly began its full schedule this week, and Hurley has not yet introduced any bills.

Hurley would only give a statement to The Associated Press and declined to answer specific questions about the article.

"I take the honor of serving in this state House more seriously than anything I have in my life," she said. "I identify with every woman who has overcome the odds to realize their dream. My past shapes who I am today."

In the magazine, she writes that her dream of running for office started at an early age.

"As I grew up, there were many factors that made me keep putting off being a representative of the people including the fact that I had a daughter at the young age of 15," she wrote.

Hurley said in the article that she first started working at a Hooters store in Alcoa as a way to help pay for college expenses at Maryville College, and later transferred to another store in Knoxville. She left to work for another restaurant and then a bank before becoming seriously ill and taking six months to recover.

A chance encounter with a former manager led to an offer to return to Hooters.

"I had gained quite a bit of weight by then, but he offered it to me anyway," she said. "He took me under his wing and within the year I had gotten back into physical shape and had become a trainer for that store."

Hurley said working at Hooters primed her for success.

"Hooters gave me the opportunity to belong to a group of women who had also struggled, or were struggling, and I was lucky to have managers that saw each girl's potential and coached us, protected us, and helped shape who we are today," she said.

House Republican Caucus Chairwoman Debra Maggart of Hendersonville said Hurley has "never hidden anything about her past," and that the voters knew about her background when they elected her.

"We are a citizen Legislature and we've all taken a different pathway in life to get here," Maggart said. "We all have different backgrounds."