This Italian eggless custard of "cooked cream" gets a tangy, lightening lift of yogurt 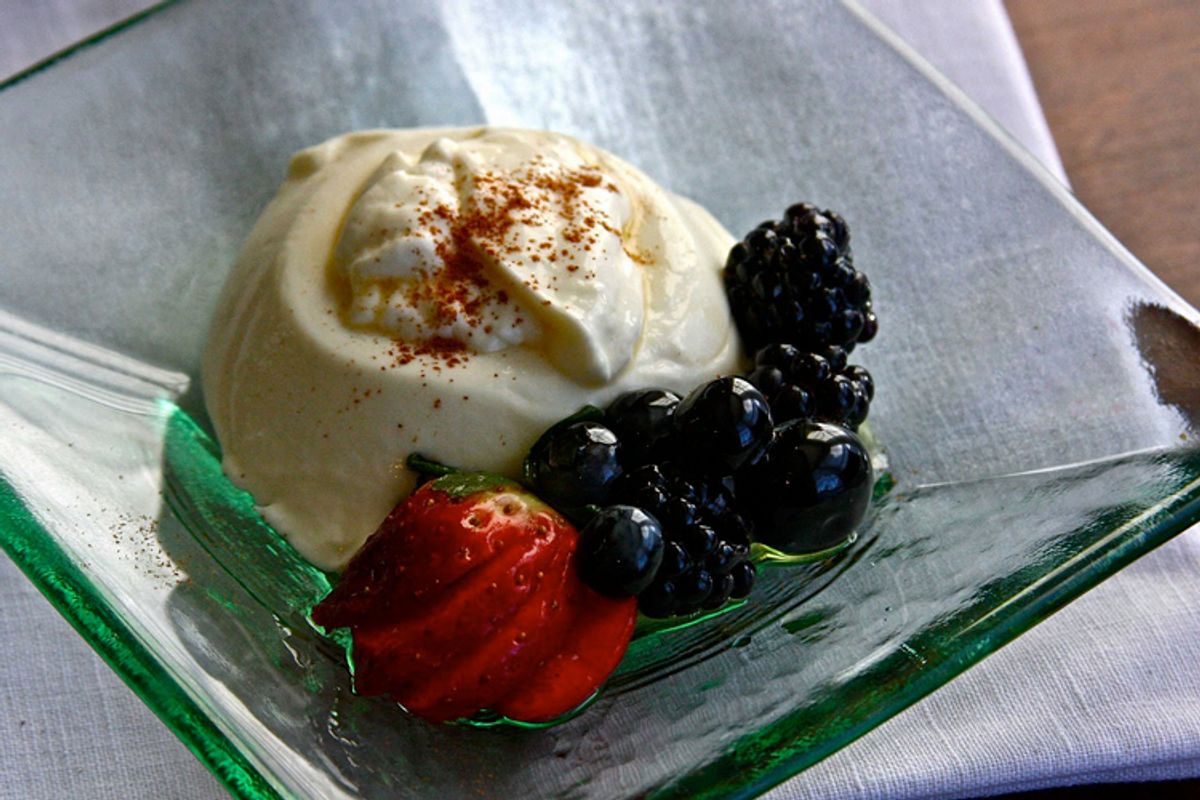 Once, early on in our married life, long before Crate & Barrel and the Le Creuset craze, during the dark ages of Dansk and fondue pots and recipes with Hamburger Helper and Campbell's Cream of Mushroom, there lived among our many kitchen gadgets a yogurt maker. This was my husband's purchase. I personally never touched the stuff, but my husband, the M.D. specialist in gastroenterology, a man exquisitely attuned to gut health, felt it was his God-given duty to make yogurt on a weekly basis.

And so he did. (Until he got sick of the novelty, and turned to making blueberry pancakes for breakfast. Every Sunday.) Eventually, I came around to yogurt, and as breakfast choices go, it's  a good and healthy one, as long as you watch the sugar content and quantity consumed, especially when you dress it up with honey and nuts and handfuls of granola. Fruit at the bottom? Apply to hips not lips.

But, throwing health benefits to the winds, I offer you the most heavenly, delicious and mindlessly simple thing to do with plain yogurt: panna cotta. A cream supreme.

Literally, the words "panna cotta" translate to "cooked cream." A lightly gelled and chilled eggless custard, it's traditionally made with just cream, sugar and a little gelatin (plus some flavorings of your choice). But I learned to make panna cotta from a class with the the wondrous Lynne Rossetto Kasper of NPR's "The Spendid Table." Her recipe introduced sour cream into the mix, giving the finished dish a delicate tang and a lighter feel. I've meddled with her recipe a bit, using thick yogurt instead of sour cream, and using enough gelatin to set it up firm enough to unmold easily. (You can add or reduce the gelatin in slight amounts to get the consistency you like; some people like to use so little that the panna cotta is so light you have to eat it in the bowl, and others like to make it nearly jiggly.) I've also added a favorite topping of dried apricots in sweetened wine, but you should feel free to use whatever fruit, raw or cooked, you like.