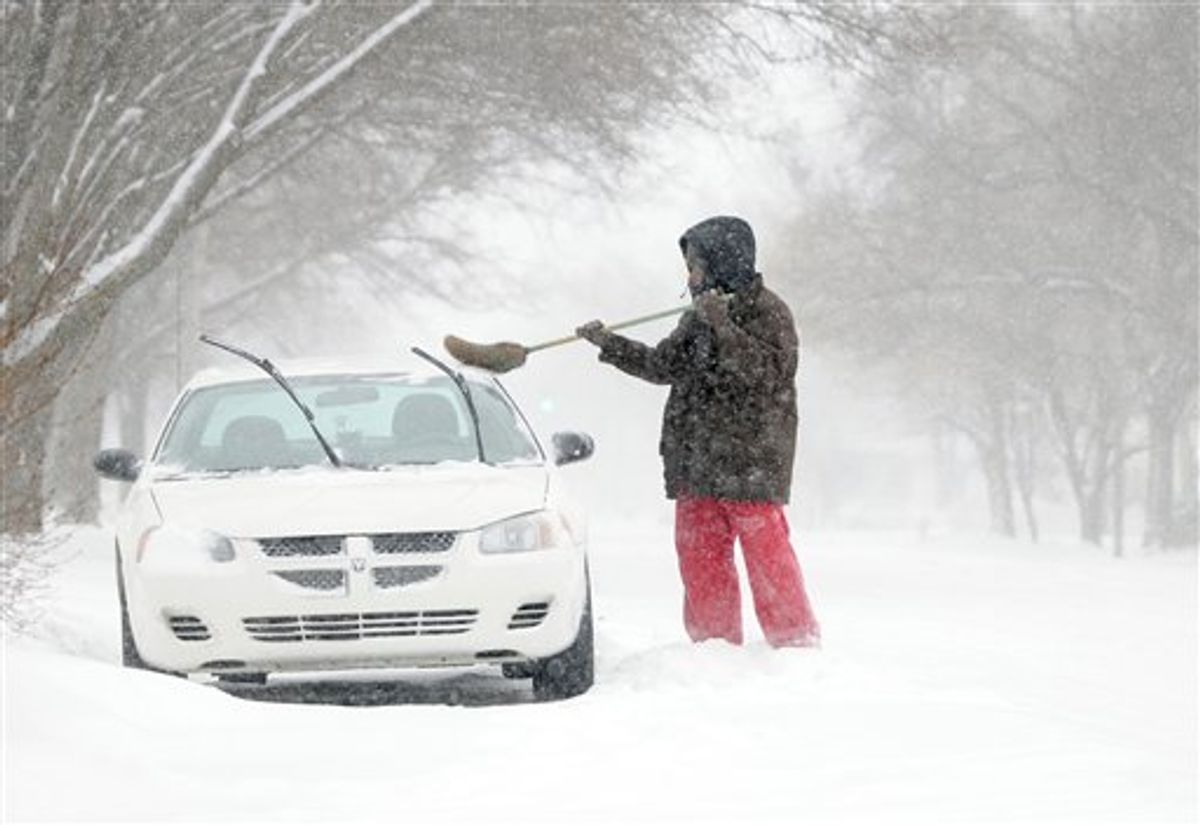 Marques Lewis sweeps snow from his car, Tuesday, Feb. 8, 2011, in Salina, Kan. Lewis said he was "getting ready to go to work" and had to "start a little early." Three to four inches had fallen in the Salina area by mid-morning with the temperature at five degrees. (AP Photo/Salina Journal, Tom Dorsey) (AP)
--

A second powerful blizzard in a week roared through parts of the nation's midsection on Wednesday, bringing biting winds and dumping a foot of snow on areas still digging out from last week's major storm.

The storm that rolled into Oklahoma on Tuesday had dropped about a foot of snow by Wednesday morning in Bartlesville, about 50 miles north of Tulsa, and another 9 inches across the state line in Siloam Springs, Ark., said Michael Lacy, a meteorologist with the National Weather Service in Tulsa. He said strong winds created blizzard conditions that limited visibility and made travel hazardous.

Heavy snow was reported in parts of Kansas and Texas, where many school districts cancelled classes in anticipation of yet another round of unusually icy weather.

In northeast Oklahoma, Sandra Barrows was stuck at a Salvation Army shelter after running out of money for hotel rooms. She was hoping to get a bus ticket out of Tulsa, where she got stranded a week ago on her way to a new job in St. Louis, before the third storm in a week hit the area.

But after the record 14-inch snowfall that kept students out of school for at least six days, halted garbage pickup and kept some roads impassable, the city of 390,000 was bracing for the worst. On Tuesday, Tulsa was just inches from breaking its winter snowfall record of 25.6 inches that was set in the 1923-1924 season.

State lawmakers in their first week of the legislative session cancelled their work until next week in anticipation of the storm. The Oklahoma Highway Patrol was discouraging all travel statewide.

Road crews in Arkansas were treating the streets Tuesday in anticipation of snow that forecasters warned would choke highways, disrupt work days and likely extend the stretch of cancelled school days in northwest Arkansas to nearly two weeks. Some educators fear that the missed days are eating into time they need to prepare students for annual state benchmark exams in April.

School districts across northwest Kansas called off classes Tuesday and several universities closed early. Up to 11 inches of snow was expected in central parts of the state but with calmer winds than those that came with last week's blizzard.

"If there is any silver lining to the storm it is that we have not had any ice before it started -- it has been all snow," said Robb Lawson, a meteorologist with the National Weather Service in Wichita.

In Texas, classes were canceled for students in the Dallas, Fort Worth and Amarillo school districts. Dallas-Fort Worth International Airport canceled about 120 departures. Spokesman David Magana says DFW airport anticipated operating a full schedule later Wednesday when conditions were expected to improve.

In Oklahoma, several inches of snow remained unplowed in many Tulsa neighborhoods Tuesday, and abandoned cars and trucks still littered local roads. As some of the snow melted over the weekend, dozens of water mains broke throughout the city, causing flooding and even more street closures.

There was progress, though: Mail delivery and city buses had returned to many neighborhoods, and trash collection began again Monday. Supermarkets that were picked clean earlier had bread, milk and juice on the shelves again.

City workers kept up their 12-hour shifts working to clear the mess from last week's storm. Plows were dispatched to residential neighborhoods to haul away snow, and fire trucks were ordered to drive through neighborhoods to pack down snow. The city, which had been criticized for its response to the storm, also announced that it was bringing in contractors to help speed up snow removal.

Meals on Wheels of Metro Tulsa provided some help for homebound people who might be affected by Tuesday's storm, delivering a week's worth of food to a couple hundred of the program's most vulnerable residents.

"I think when people did get out," city spokeswoman Michelle Allen said, "they realized the severity of the snow we received."