Schools are cracking down on them, especially after Tucson. But my boys need their fantasy arsenal 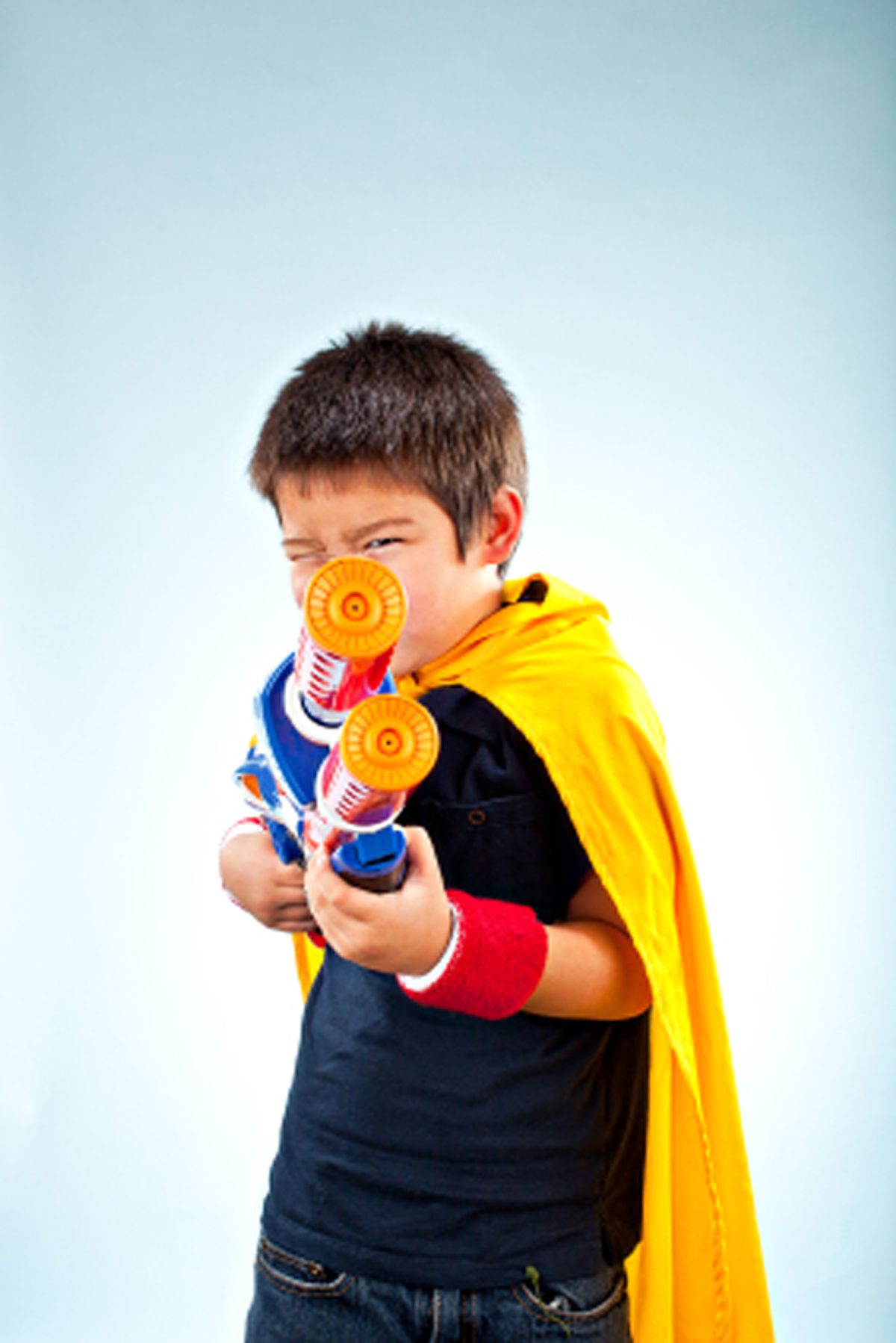 How many guns do you have at home? Not real ones. I'm talking the toy variety.

The Marin boys' arsenal includes, in descending order of violence: two Nerf N-Strike automatic rifles, a pair of silver six-shooter cap guns, a Colt 45 squirt gun, a Clone Trooper blaster and a scale replica Tommy Gun passed down from my misspent youth that makes a deafening rat-a-tat-tat and has no little orange tip to make it look less real.

Is this bad parenting? Even worse in light of the Arizona shooting, when the fight over gun control and zero-tolerance policies in schools is once again ricocheting across the country? Should my wife and I be calling Social Services on ourselves? Or are boys and guns inevitable and harmless bedfellows? Literally. Our two sons, ages 6 and 4, have taken to sleeping with their Nerf Blasters under their beds.

It started over Christmas. We'd been watching "A Christmas Story," that Yuletide chestnut about a young boy's fervid wish for Santa to slip a "Red Ryder carbine-action, 200-shot Range Model air rifle." To which his parents' maddening grown-up refrain is, "You'll shoot your eye out!" It's a movie about family, parents, childhood, simpler times. My boys' takeaway was slightly different.

They wanted that gun.

A couple of days later, I took Diego, our oldest, to Toronto to visit his grandmother. We had dinner at my high-school buddy Dave's house. As we walked in, he shouted down to the basement, "Turn off the blood!" His boys -- 14, 12 and 8 -- were playing "World of Warcraft." The thinking was that Diego, being just 6, shouldn't be exposed to the full-gore version of the ubiquitous shooter game.

Blood safely off, we went down to say hi and found the three boys sprawled amid an armory of Nerf ordnance. Assorted pistols. A double-barreled shotgun. A sniper rifle called the Longstrike CS-6 that I now know to be "the longest Nerf Blaster!" The brutal Raider CS-35, with its 35-dart revolving magazine canister. Do I need to pause here to explain Nerf firearms to anyone? They shoot three-inch Nerf "darts" with a force unlikely to hurt anybody, unless you happened to catch one with, say, your eye.

The darts can be loaded in clips that hold six or more at a time. The bigger guns can be broken down and recombined into multiple configurations -- if you're a Green Beret. Or one of the "youths" featured on the boxes, who look 25 and like they're posing for Soldier of Fortune. In no time the boys -- mine and Dave's -- turned his basement into a war zone while the adults sipped vodka tonics, debating the merits of parentally sanctioned play violence vs. a few minutes alone to drink in peace.

Christmas has become a fraught time for our family, gun-wise. Last year, flying back from Canada, we were detained at Pearson International Airport by several Kevlar-vested Mounties when a six-shooter and handcuff set (souvenirs from the Gene Autry Museum) were found in our son's backpack. When I was a kid they would have let me wear that gun on the plane. Our hardware was solemnly confiscated.

There isn't a picture of me under the age of 9 without a weapon in my hand. I remember packing, in addition to the rat-a-tat-tat Tommy gun, a cap gun, a plastic Peacemaker whose revolving chamber I loaded with the little capsules that held my asthma medicine (fastest wheeze in the West) and a snub-nosed .38 I stuck in the waist of my pants when watching "Get Smart." Even though my mother, like most mothers, abhorred violence. And my father had served in a war -- two, actually – that left him, if anything, a pacifist.

My parents never made a connection between play violence and the real thing. I can understand the urge to ban BB guns in a violence-based state like Iraq, and where, according to a recent piece in the New York Times, the hospitals are packed with kids with eye injuries. But in L.A.? Please. Our gun-banning preschool is in Hollywood, where, last time I checked, fantasy gunplay is still a multibillion-dollar business. Yet if any of the entertainment industrial complex's pint-size progeny show up for story time packing heat, they run the same risk of suspension or criminal charges as that 7-year-old boy in Florida last year or last month in New Jersey.

I've seen parents scold their kids for pointing a finger like a firearm. What kind of message is that? You're giving that kid -- and his finger -- way too much power. I want my boys to learn the difference between pretend and actual violence. And by the way, if you deprive a little boy of store-bought toy guns, he'll make one out of a bar of soap. Like Dillinger did to bust out of prison. That doesn't mean he'll grow up robbing banks -- or shooting innocent people in a mall. When Diego got his Nerf Blaster Christmas morning, the first thing he did was point it at me and say, "You're under arrest."

The simple reason boys like guns is it gives them imaginary power when reality has dealt them none -- an ability to impart justice when they are subject only to capricious parental injustices like, "You'll shoot your eye out!"

The same reason I enjoy their guns as much, if not more, than they do. To release pent-up hostility, socialized rage, stifled ambitions. The adrenaline shot of squeezing the trigger compared to adulthood's struggle against powerlessness -- gridlock, getting passed over at work, the consequences of actually hitting someone -- is one of life’s simple joys. As opposed to one of its evil, insidious influences. It hits the fantasy of bringing justice to an unjust world. Saying to the bad guys in your life, "You're under arrest."

At a 6-year-old's laser-tag birthday a couple of weeks ago, I suited up and tried to take out as many Blue Team bastards as I could. I was jealous when I heard about a private school whose new-dad bonding activity was paintball. When I demonstrated, with a little too much studied nonchalance, to a buddy how to lock-and-load the Nerf Recon CS-6, he looked at me like I'd joined the NRA. Which, by the way, just solicited my membership with a slick black ID card pre-embossed with my name, rank and serial number.

I'm not a joiner. And Canadians are up there on the NRA hit list with "global gun ban diplomats at the U.N., militant anti-hunting extremists, radical billionaires and the freedom-hating Hollywood elite."

But if anyone tries to impinge on my right to bear Nerf Blasters, they're going to have to pry that yellow plastic semi-automatic rifle from my cold, dead hands.