A month after bullet wound to the forehead, congresswoman regains speech and asks for "toast" 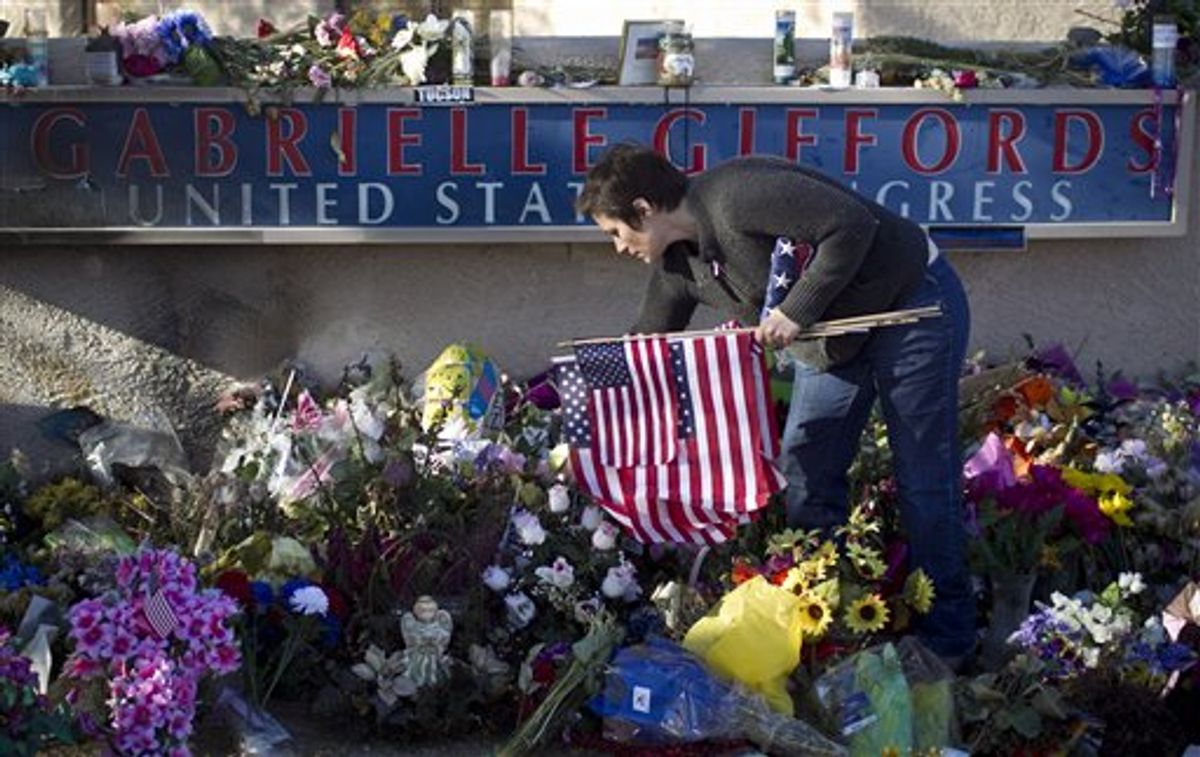 Amanda Sapir picks up flags left at a memorial outside Rep. Gabrielle Giffords Tucson office on Friday, Feb. 4, 2011 in Tucson, Ariz. Volunteers dismantled a massive tribute Friday outside the Tucson hospital where U.S. Rep. Gabrielle Giffords and other victims of a mass shooting were treated. The volunteers removed thousands of candles, cards, photos, stuffed animals and flowers that blanketed the 60 foot-by-100 foot lawn in front of University Medical Center, where doctors performed life-saving surgery on the Arizona congresswoman, who is now in a rehabilitation facility in Houston. The items filled up 60 boxes, which will be stored in a locked area at the hospital until a permanent memorial can be built, hospital spokeswoman Darci Slaten said. (AP Photo/ The Arizona Republic, Pat Shannahan) (AP)
--

Arizona Rep. Gabrielle Giffords spoke for the first time since she was shot in the forehead, her spokesman said Wednesday, yet another significant milestone in her recovery from a traumatic brain injury.

Giffords first spoke within the past few days and is speaking "more and more," spokesman C.J. Karamargin said Wednesday. He didn't know what her first words were, but said at breakfast one morning she asked for toast.

"She's working very hard and it's paying off," he told The Associated Press. "We're elated at this. We always knew Gabby is a fighter and that she's not going to let this thing win. And you know, every day is proof of that."

Other news organizations, including Politico, earlier reported that Giffords had asked for toast and was able to speak.

In a Facebook post on Tuesday, Giffords' husband Mark Kelly said his wife had her appetite back and was eating three times a day, "even though it's hospital food."

"It is hard to believe that only one month has passed since Gabrielle was shot," he wrote. "The doctors say she is recovering at lightning speed considering her injury but they aren't kidding when they say this is a marathon process."

He said "there are encouraging signs every day," pointing to her renewed appetite.

"Your prayers are being heard, so don't stop," he wrote.

Kelly, a NASA astronaut, said last week that he expects his wife to be well enough to be at his space launch in two months.

The space shuttle Endeavour will leave April 19 for a two-week mission to the International Space Station, and Kelly will be on board leading a veteran, all-male crew. The mission will be Endeavour's final flight and Kelly's fourth.

Dr. Gerard Francisco, who is treating Giffords at a rehabilitation facility in Houston, said Tuesday that he hopes the congresswoman can make enough progress to attend the space launch, but said it's too early to say.