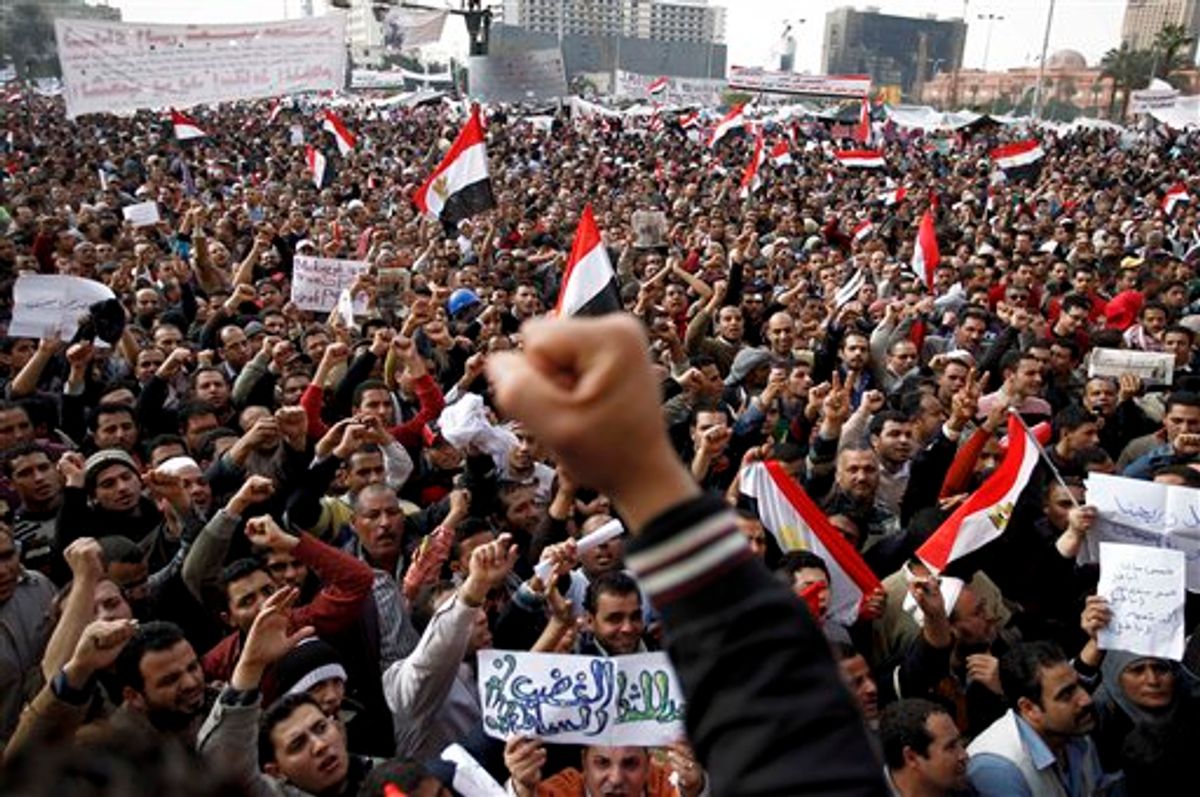 Anti-government protesters demonstrate in Tahrir Square, in Cairo, Egypt, Tuesday, Feb. 8, 2011. Protesters appear to have settled in for a long standoff, turning Tahrir Square into a makeshift village with tens of thousands coming every day, with some sleeping in tents made of blankets and plastic sheeting. The arabic on the sign reads "The rage brings the light of freedom". (AP Photo/Tara Todras-Whitehill) (AP)
--

Egypt's protesters and opposition groups were infuriated Wednesday by a warning from Vice President Omar Suleiman that if their movement doesn't enter negotiations, a "coup" could take place causing greater chaos, as a mass demonstration in a central Cairo square entered its 16th day.

Suleiman's sharply worded warning cast a shadow over his efforts, backed by the United States, to put together negotiations with the opposition over democratic reforms. The protesters fear the regime will manipulate the talks and conduct only superficial reforms, so they insist they will only enter substantive negotiations after President Hosni Mubarak steps down.

Thousands of protesters chanting "we are not leaving until he leaves" camped overnight in downtown Tahrir Square, the epicenter of their demonstrations, in tents made with plastic tarps and bed covers to protect them from chilly weather, sprawling out into sidestreets. Many have been sleeping underneath the tanks of soldiers surrounding the square to prevent the vehicles from moving or trying to clear the area for traffic.

Tahrir has turned into a giant living room for the protesters, who wake early in the morning to mob the streets, distribute sweets and welcome visitors who come to take pictures with tanks and protesters' banners.

The demonstrations have paralyzed the area around the square, defying the government's efforts to restore a sense of normalcy as the uprising enters its third week.

Egypt's most famous tourist attraction, the Pyramids of Giza, reopened to tourists on Wednesday. Tens of thousands of foreigners have fled Egypt amid the chaos, raising concerns about the economic impact of the protests.

Suleiman's comments the previous night were a blunt, impatient warning for the protests' youth organizers to enter talks and drop their insistence on Mubarak's ouster. He rejected any immediate departure for Mubarak -- who says he will serve out the rest of his term until September elections -- or any "end to the regime."

"We can't bear this for a long time," he said of the Tahrir protests. "There must be an end to this crisis as soon as possible." Speaking to the editors of state and independent newspapers Tuesday night, he said the regime wants to resolve the crisis through dialogue, adding, "We don't want to deal with Egyptian society with police tools."

If dialogue is not successful, he said, the alternative is "that a coup happens, which would mean uncalculated and hasty steps, including lots of irrationalities." The comment appeared to be a possible hint at imposing military law -- which would be a dramatic escalation.

Osama Saraya, the editor-in-chief of the pro-government newspaper Al-Ahram who attended the meeting, said Suleiman didn't only mean a military coup but a takeover by another powerful state apparatus or Islamist groups.

But protest supporters and organizers reacted with alarm.

Abdul-Rahman Samir, a spokesman for a coalition of the five main youth groups behind the protests in Tahrir Square, said Suleiman was creating "a disastrous scenario."

"He is threatening to impose martial law, which means everybody in the square will be smashed," Samir said. "But what would he do with the rest of 70 million Egyptians who will follow us afterward."

"He is leaving one option to us, since dialogue is not real and those who are talking are Suleiman to Suleiman," Nour said. "That option is the coup."

Over the weekend, Suleiman held a widely publicized round of talks with the opposition -- including representatives from among the protest activists, the Muslim Brotherhood and official, government-sanctioned opposition parties, which have taken no role in the protests.

But the youth activists have said the session appeared to be an attempt to divide their ranks and they have said they don't trust Suleiman's promises that the regime will carry out constitutional reforms to bring greater democracy in a country Mubarak has ruled for nearly 30 years with an authoritarian hand.

The Muslim Brotherhood, Egypt's largest and best organized opposition group, which initially welcomed the talks, took a tougher line Tuesday, calling Mubarak's regime "illegitimate" and calling for the government to open "all files of corruption."

Suleiman's remarks came hours after a 30-year-old Google executive who helped ignite the uprising energized a cheering crowd of hundreds of thousands with his first appearance in their midst after being released from 12 days in secret detention. "We won't give up," Wael Ghonim promised at one of the biggest protests yet in Cairo's Tahrir Square.

Once a behind-the-scenes Internet activist, Ghonim has emerged as an inspiring voice for a movement that has taken pride in being a leaderless "people's revolution."

An al-Qaida in Iraq front group, meanwhile, urged Egyptians to join holy war and establish an Islamic state -- the latest in a series of statements by Islamic militants supporting the protesters in their bid to oust Mubarak.

The Islamic State of Iraq warned Egyptians against being deceived by "the malicious secularism, the infidel democracy and the rotten pagan nationalism," according to a statement posted Wednesday on two militant websites.

It urged the Egyptians not to be afraid of the United States, saying the country is in its weakest state because it is involved in Iraq and Afghanistan and busy watching events in Yemen, Somalia and other North African countries.