On the lunch menu for Obama: GOP arrogance 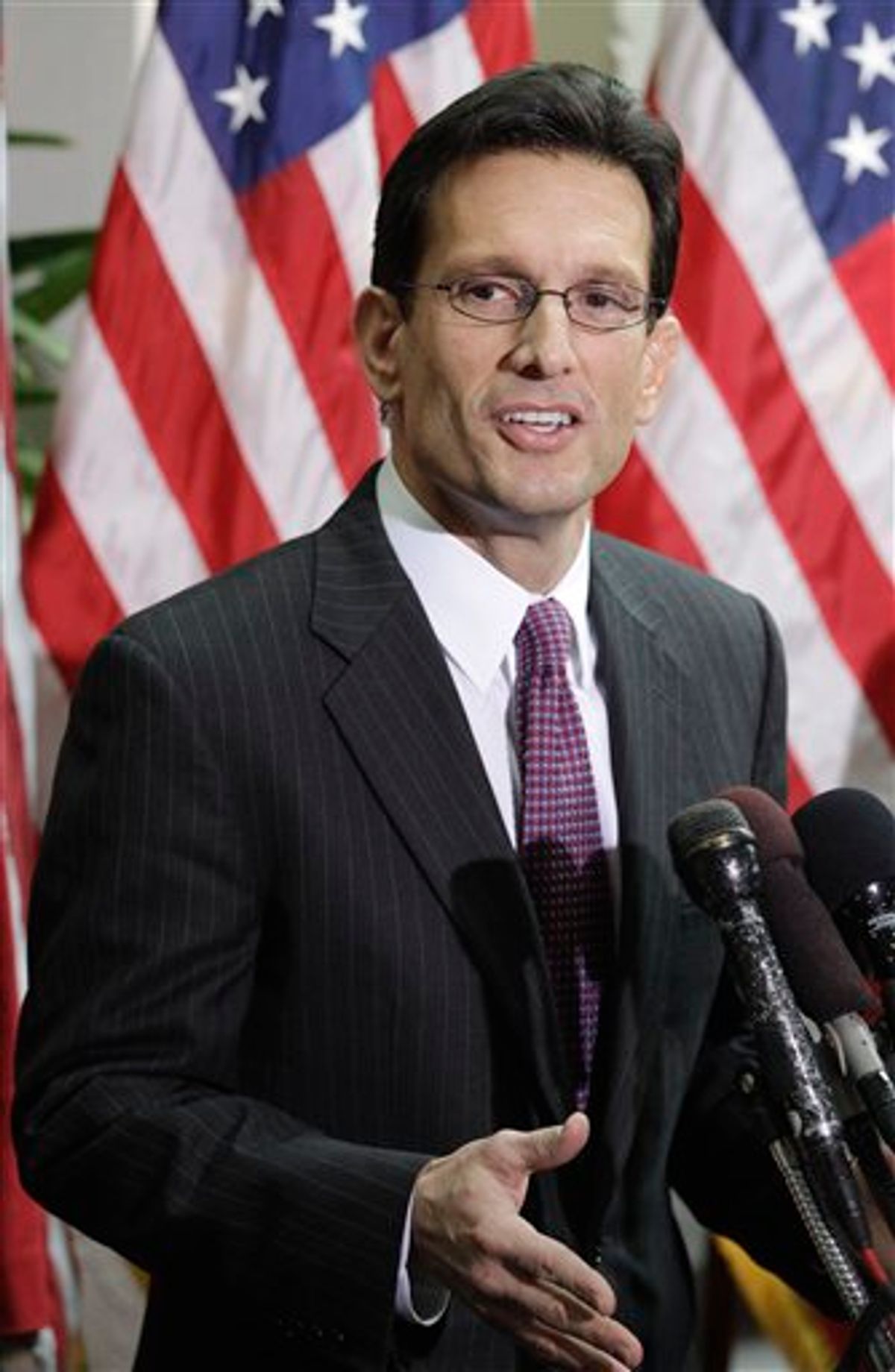 Eric Cantor, House majority leader, has a message he plans to deliver to the president at a White House lunch on Wednesday: You still don't get it.

When the House Republican leaders arrive at the White House to meet with President Obama for lunch Wednesday, Majority Leader Eric Cantor plans to tell the president that he may still not understand how business works in America.

Cantor told reporters Tuesday that if given the opportunity, he will explain to the president that businesses do not have a "responsibility" to the nation or to the government in the way Obama explained in his speech to the Chamber of Commerce earlier this week.

"If we're going to correct the ailing economy, and put us back on the path to growth, we're going to have to create an environment that businesses will want to come here. Will want to deploy capital here. Will want to invest in research and innovation here. That's how we lead in America," Cantor said. "It's not because Washington says, 'Go do that,' and businesses then go and do that. That's not who we are. So again, I'll have hopefully this discussion with the president tomorrow."

The Daily Caller leans hard right, but let's give reporter Chris Moody the benefit of the doubt and accept that his categorization of Cantor's goal -- "to tell the president that he may still not understand how business works in America" -- accurately captures the overwhelming consdescension dripping from the majority leader. It does fit with everything we know about the Virginia politician's Republicans-are-always-right-and-Democrats-wrong personality. And while it may not come off as respectful, his overall point falls strictly in line with basic neoclassical economic theory: Rational actors respond to practical incentives, and not to moral suasion. If the tax code encourages corporations to offshore their operations, they will do so. If Wall Street traders are rewarded with obscene amounts of compensation for risky speculative bets, that's how they'll play the game. If Southern "work-for-hire" states make it hard for labor to organize and keep wages low, capital investment will migrate from the Rust Belt to the Sun Belt. It's all true -- getting incentives right is critical for good economic policy management.

And, of course, there's no need to tell Obama or any of his advisers this. His administration has been very quick to offer targeted tax breaks to small and large businesses that aim to encourage hiring and investment. In his speech Obama said he wanted to make permanent a tax credit allowing businesses to write off research and development expenses -- exactly the kind of thing Cantor was alluding to in his "create an environment comment."

But the truth of whether Obama "understands" how business works is not relevant to evaluating Cantor's gambit. Republicans appear to have had success with portraying Obama as anti-business, so they're not going to drop the strategy. The question is, are Republicans underestimating how angry Americans are at the corporate class that has responded to the incentives currently in place by squeezing workers and grabbing an ever larger piece of the pie for themselves? That's the part of the electorate Obama was targeting.

Eric Cantor's answer to those questions, as he speaks for American businesses, is "no." We don't have "mutual responsibilities." We don't need to think of what we can do for America. Our bottom line is our only concern. Don't try your moral suasion on us, because we don't care what's right or wrong.

Fair enough. And as long as everyone is clear on this point, let's proceed to the next election and see whose version of America gets endorsed.