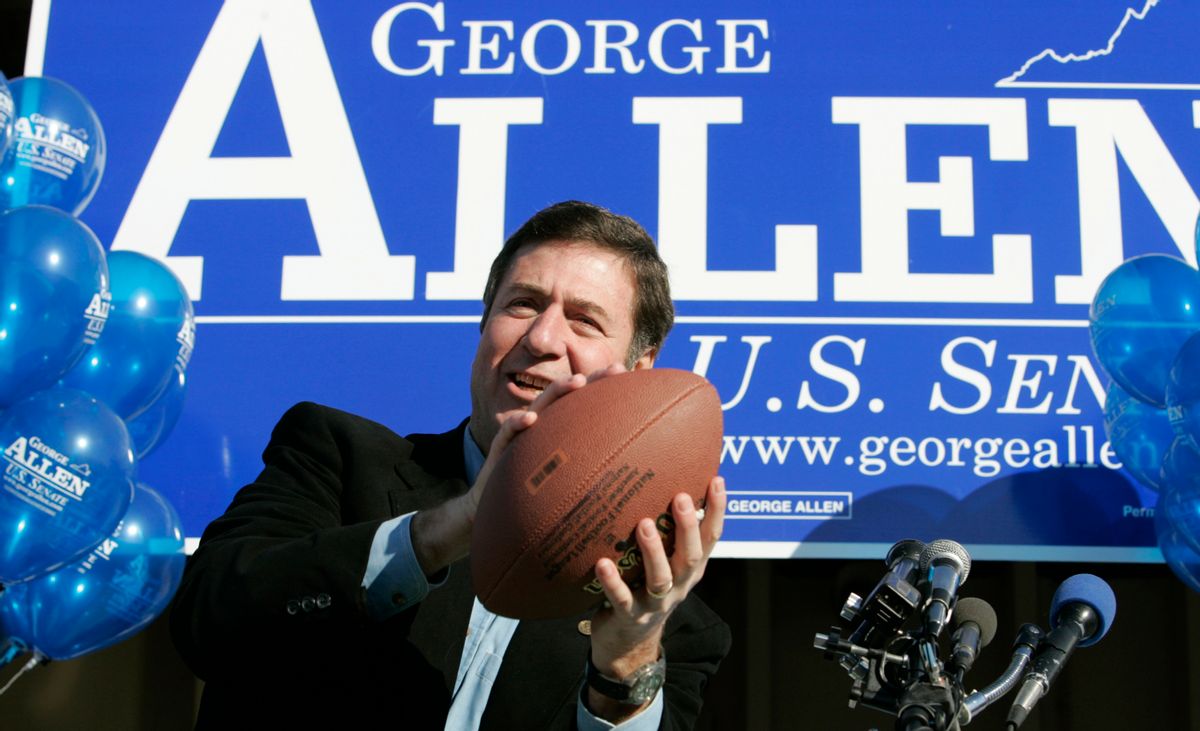 At first glance, the unsurprising news that Jim Webb won't seek reelection to the U.S. Senate next year would seem to increase the likelihood that George Allen -- the Republican unseated by Webb in 2006 -- will succeed in his comeback bid.

After all, Webb, a decorated Vietnam veteran who served as one of Ronald Reagan's Navy secretaries, is fairly popular in Virginia, and his military background, distinct personality, and willingness to break with his party seemed likely to help him in 2012, even if the climate remains rough for Democrats. As Ed Gillespie, a former Virginia GOP chairman, put it on his Twitter feed:

Jim Webb retirement good news for va gops. He was beatable, but less so than anyone else dems can field.

In reality, though, Webb's departure probably doesn't represent much -- if any -- of a boost for Allen. Here are five factors that can still sink him:

1) Webb may not have been that formidable: Sure, on paper, running a gruff ex-Marine with ties to the Reagan administration is a great way for Democrats to win support from traditionally Republican-friendly voters in exurban and rural Virginia. The problem is that the same thing was said back in 2006, and there's no reason to believe that Webb's unique biography and style had any such effect. The main reason he defeated Allen was extremely high turnout out in Northern Virginia and Richmond; Allen still swamped him in rural Virginia. In other words, Webb really didn't accomplish anything in '06 that a comparably funded generic Democrat couldn't have achieved in the same climate. And while his poll numbers now aren't bad,  Webb's appeal doesn't seem any broader than it was in '06. He's replaceable.

2) Democrats may end up with an even stronger candidate: Tim Kaine, Virginia's governor from 2006 to 2010 and the current Democratic national chairman, has been insisting that he won't run. But let's see what happens if national Democrats and the White House now start leaning on him. In head-to-heads with Allen, he has been performing as well as -- if not slightly better than -- Webb. Sure, Republicans would make much of Kaine's stint as "Barack Obama's handpicked party chairman" -- but would that be any worse than all the fun they'd have with Webb's Senate votes?

3) Even if Kaine passes, a no-name Democrat could still win: Webb proved this. No one knew who he was at the start of the 2006 campaign; he was originally supposed to lose the Democratic primary to a lobbyist named Harris Miller. (Anyone remember him?) But, as noted above, the climate was right for Webb, the national party helped fund him, Allen's racial history -- part of which was memorably documented here at Salon -- became an issue, and Webb prevailed. Democrats may not have much of a bench in Virginia, but that may not matter -- especially if Allen's own baggage becomes an issue in a general election race.

4) Allen still isn't a lock for the GOP nomination: He took a big step forward when the state party agreed late last year to award the nomination through a primary, and not the traditional, activist-dominated state convention. It also appears that Ken Cuccinelli, the ambitious, headline-grabbing state attorney general who showed some interest in this race, will sit out '12 -- probably to wait for a gubernatorial bid in 2013 (or a run for Mark Warner's Senate seat in 2014). Still, Allen has drawn one primary foe so far, a Tea Party leader named Jaime Radtke. Before you go dismissing her, just remember the success that no-name Tea Party candidates like Christine O'Donnell, Joe Miller and Sharron Angle enjoyed last year. And consider that Radtke may have the support of Cuccinelli, who wants Allen off the stage.

5) It's a presidential year: As Jonathan Bernstein noted today, there's often a pronounced separation between presidential candidates and their party's U.S. Senate candidates. In 2008, Warner ran far better than Obama, even as Obama carried Virginia. Still, with Obama on the ballot in '12, the electorate will look different in Virginia than it did in 2010 and 2009, when it was dominated by Republican-friendly voters looking to send the president and his party a message. Especially if the economy improves, the Democratic nominee -- whether it's Tim Kaine or someone we've never heard of -- figures to benefit.