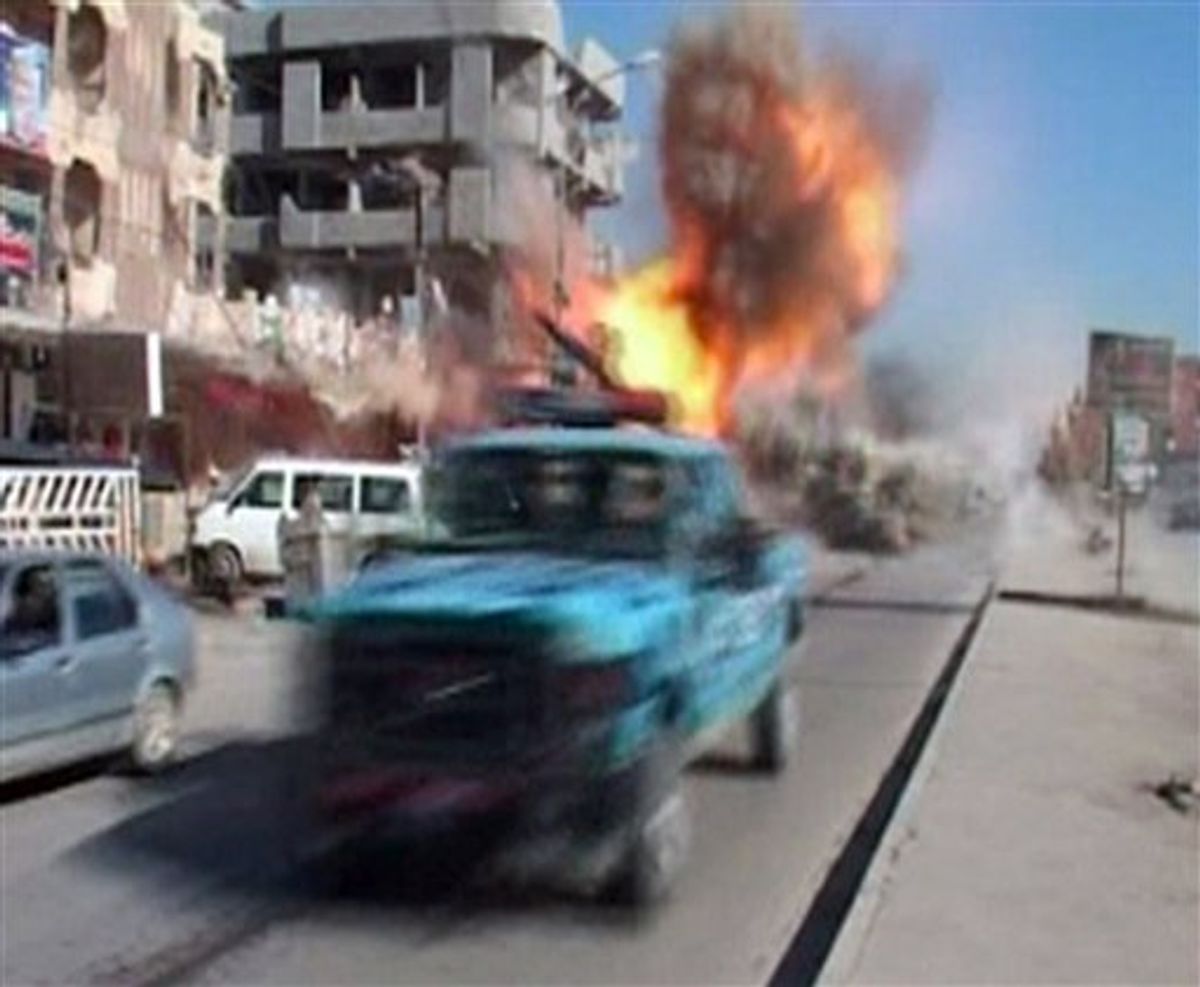 In this image from TV showing the moment that a bomb detonates on a street in Kirkuk, Iraq, on Wednesday Feb. 9, 2011, as security forces and emergency vehicles pass along the main road on their way to attend the scene of another explosion. The bomb exploded while news cameraman Imad Mitti filmed street scenes and the blast knocked him off his feet, but he was unhurt in the explosion. Car bombs ripped through the oil-rich Iraqi city of Kirkuk on Wednesday, killing at least six and wounding some 35 others in the heart of a region of long-simmering ethnic tensions.(AP Photo / Imad Mitti, APTN) (AP)
--

A suicide bomber posing as a dairy deliveryman struck a Kurdish security headquarters Wednesday, setting off a series of rapid-fire attacks against the oil-rich Iraqi city of Kirkuk that killed seven and wounded up to 80 people.

Within minutes, two more bombs exploded nearby, sending dark plumes of smoke into the clear winter sky and ending a six-month lull in violence in a city rife with simmering ethnic tensions 180 miles (290 kilometers) north of Baghdad.

The city is divided between Kurds, Turkomen and Sunni and Shiite Arabs, and has long been feared to be a possible new flashpoint in Iraq.

Police Brig. Gen. Sarhat Qadir said two policemen were among the dead, while five police and eight officials with the Kurdish intelligence forces known as the Asayish were wounded. Dr. Khalid Ahmed of Kirkuk emergency hospital confirmed the total casualty count of seven killed and as many as 80 injured.

"We had just passed the car bomb -- it was less than 40 yards away," said policeman Meriwan Salih, whose arm was broken and who had shrapnel pierce his back when the third bomb exploded as his patrol sped by. "The huge blast threw me into the air."

Kirkuk's police chief, Maj. Gen. Jamal Tahir, said the suicide bomber got close to the Asayish headquarters by claiming to be a deliveryman on his way to pick up milk at an ice cream shop next door. Instead, the bomber slammed his pickup truck into a blast wall surrounding the headquarters around 10 a.m., sending flames through the building and damaging its front facade.

The second explosion hit a few blocks away, near a gas station. AP Television News footage showed police cars with blaring sirens racing to the headquarters when the third blast exploded, just down the street from the suicide bomber.

The third bombing knocked people to the ground, and was immediately followed by gunshots.

"We have informed all security headquarters and political parties then to be careful and take security measures," Tahir said. He said Kirkuk police also will investigate how the bombers got past security precautions to launch the attacks.

In addition to being an epicenter for ethnic tensions, Kirkuk also sits on top of one-third of Iraq's estimated $11 trillion in oil reserves, and Arabs fear the Kurds want to annex the city to their northern autonomous region.

Last summer, Gen. Ray Odierno, who was then the top American military commander in Iraq, said U.N. peacekeeping forces may need to replace departing U.S. troops in disputed region if the feud between Arabs and minority Kurds continues through this year. His comments underscored the fragility of the area's security -- and the dangers if it is disrupted -- although U.N. officials have not embraced his suggestion.

Grocery owner Shakhwan Ahmed, 30, said one of the blasts shook his shop, sending fruit and boxes crashing to the ground.

"It was chaos -- horrified people were running," said Ahmed, lamenting the attack after what he said was a nearly six-month lull in violence in Kirkuk. "There is no indication that there will be long-standing security in Iraq; there is always a security problem here. And terrorists are now telling us that they are coming back."

The regional tensions also have stalled a long-awaited national census that would determine the real numbers of the country's religious and ethnic groups. The count also could inflame the larger dispute over territory and oil between Iraq's central government and the semiautonomous Kurdish region in the north.

Violence across Iraq has dropped dramatically from just a few years ago, but bombings and shootings still occur almost every day. In the city of Tal Afar, about 135 miles (220 kilometers) northwest of Kirkuk, two Iraqi army soldiers were killed when their convoy hit a roadside bomb Wednesday afternoon.

But Maj. Gen. Qassim al-Moussawi, the spokesman for Baghdad security forces, said the capital is safe enough in many places to take down more of the thick concrete blast walls that line streets and surround buildings.

The next place the barriers will be taken down is in the northeast Shiite neighborhood of Sadr City, he said Wednesday, because it has "witnessed a stabilized security."

Sadr City was long a target for Sunni insurgents seeking to ignite sectarian warring in Baghdad. Al-Moussawi's comments came a few hours after a bomb outside the al-Ansar Shiite mosque in Sadr City wounded two bystanders.