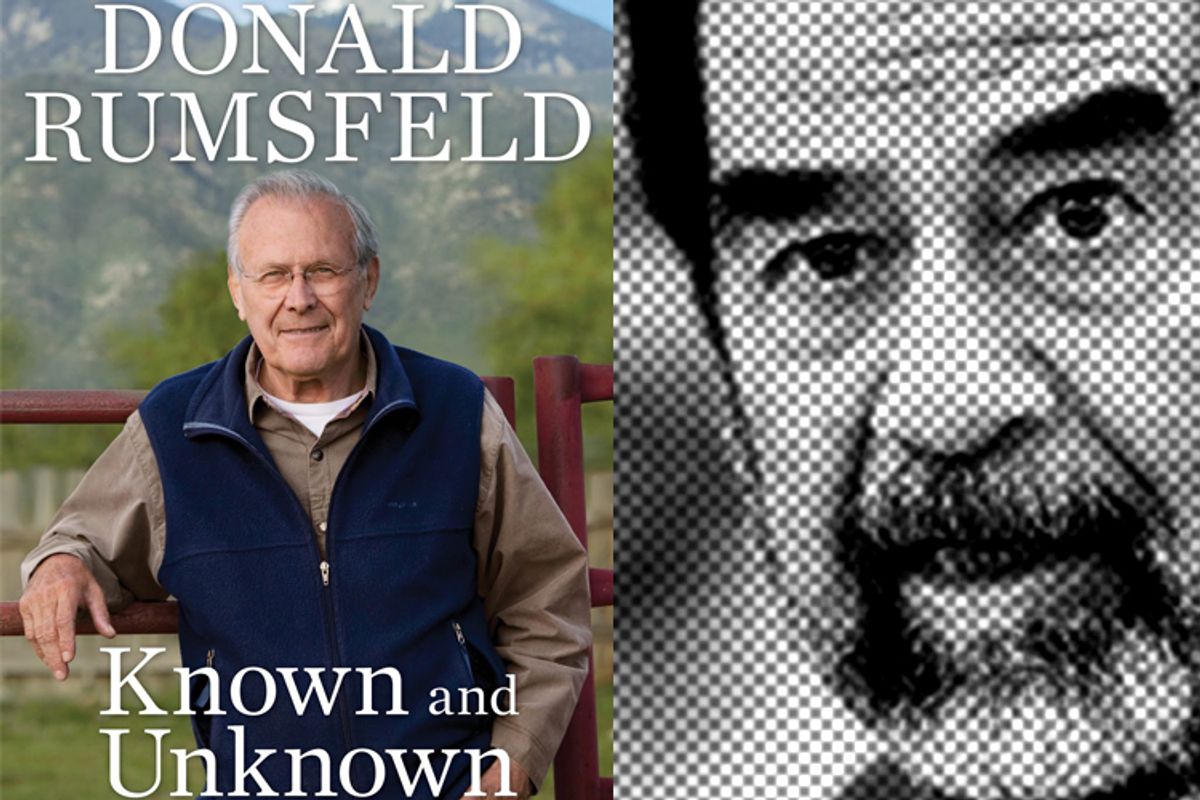 Perhaps the single strangest moment in Donald Rumsfeld's new memoir is an episode in October 2003 in which he is informed by CIA Director George Tenet that Saddam Hussein had, according to the book, put out a $60 million bounty on Rumsfeld's adult daughters. This was in the wake of the killing of Uday and Qusay Hussein by American troops in July 2003.

Here's the passage from Rumsfeld's "Known and Unknown":

After his sons were killed, there was an intelligence report that Saddam Hussein was paying $60 million for his agents to target the President's two daughters and my two daughters for reprisal attacks. That threat report was brought up at an NSC meeting in October 2003. I acknowledged it, but went on with our discussion.

"You need to take this seriously," Bush said. He had received word that pictures of his daughters had been found in Uday Hussein's palace.

Tenet broke in, reinforcing the President's concern. "You took out Saddam's sons. They might well go after your daughters." Needless to say, I was concerned about my family, but there was little I could do about it other than encourage them to take precautions.

Really? This isn't a few guys talking in a bar. This is the defense secretary, the CIA director, and the president of the United States, with the full power of the federal government pretty much at their disposal. If there truly was a real threat against Rumsfeld's daughters -- and that's an open question -- wouldn't the logical next step have been to get them a security detail?

Also important context: Saddam had already been in hiding for months by October 2003. He was captured by U.S. troops in a hole in the ground in December. So he was hardly at the height of his powers when this threat was reported.

But here's how Rumsfeld described the incident on ABC this week. (George Stephanopolous has since been uncritically pushing the "$60 million bounty" st0ry.)

STEPHANOPOULOS: What did you think and what did you do when you heard that?

RUMSFELD:Well of course the president and his family had secret service protection. My family did not. And it was a somewhat awkward moment in the meeting. I believe George Tenet raised that, and said, you have to take it seriously, because we had killed Saddam Hussein's sons. And one ought not to be surprised that that kind of activity was being generated in Iraq.

There was not much I could do. My children did not have protection.

STEPHANOPOULOS: What did you feel?

RUMSFELD: Concern. But I'm realistic. I mean, I was standing near President Ford when he was shot at. There are certain things that happen in life and there's not much one can do about it . I made a comment like ‘Thank you’ or something and President Bush looked me in the eye and said ‘You better take this seriously,” he said. And of course I did take it seriously. But I was also realistic that there was not much one could do about that.

So there you have it. Rumsfeld responded to a threat against his daughters by waving it off as an "awkward moment" in a meeting, but not doing anything. President Bush responded by warning him to "take it seriously," but also didn't do anything. Bizarre.

A spokesman for Rumsfeld did not immediately respond to a request for elaboration on the story. Here is the ABC interview (relevant section starts at 8:15):