Rumsfeld is worried about the caliphate, too 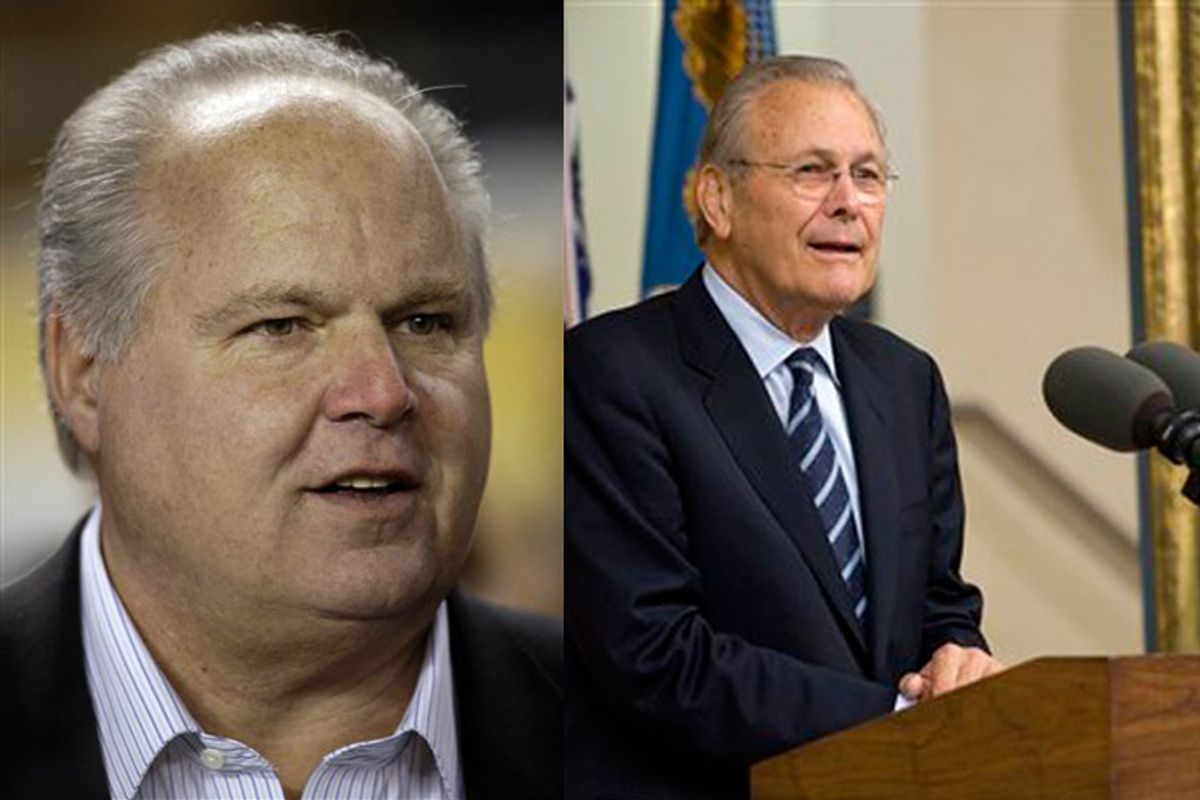 The Donald Rumsfeld "Don't blame me" tour continued this week, as the former defense secretary hawks his book "Known and Unknown." I've tried to ignore him. There's no news in his revelations, or in his settling old scores with Colin Powell, Condoleezza Rice, L. Paul Bremer and even George H.W. Bush. But Tuesday I couldn't help paying attention to Rumsfeld, as he went on the Rush Limbaugh show, kissed Limbaugh's massive ... ego, and cast his lot with the Glenn Beck Brigade, warning that radical Islam wants to establish, yes, a caliphate.

We are up against a vicious enemy, the radical Islamists are there, they intend to try to create a caliphate in this world and fundamentally alter the nature of nation states, and we're reluctant to engage in the competition of ideas and point out what they really are and how vicious they are. This current administration is even afraid to say the word Islamist. And we need to fight. We need to be willing to say what it is and be willing to tackle it. And thank goodness for people like you who are willing to do it.

I understand why Limbaugh and Beck peddle the caliphate notion; they make money on fear. But Rumsfeld joining the charge is remarkable. That a former defense secretary would express such ignorance about Islam -- generalizing about a global religion that's divided Sunni from Shia, radical from reformer, al-Qaida vs. the vast majority, and in so many more ways -- is stunning. At a moment when more conservatives are denouncing Beck's crusade, Rumsfeld casts his lot with the fear-mongers.

I'm not sure why Rumsfeld needs the Obama administration to use the word "Islamist." It makes sense to zero in on violent Islamic fundamentalism, not the whole religion. It's also ridiculous to say we're not engaging in the "competition of ideas"; in fact, freedom of religion and expression are two of our best assets in that competition, but wingnuts don't like either. It's clear that Rummy's rehab tour is aimed to shore up his standing with conservatives, not the whole country. In the book and in interviews, he's toughest on Powell, who's hated by the far right, and soft on his boss, President Bush. The far right misses no opportunity to insinuate or say flat-out that Barack Hussein Obama is soft on our Muslim enemies. I didn't think much was beneath Rumsfeld, but he reached a new low with Limbaugh today.

I talked about it on MSNBC's "Hardball" today with Chris Matthews and David Corn: