RummyLeaks: "The President said that the Senate and the House were a joke"

Donald and the president conspire to get him into the U.S. Senate, discuss Adlai Stevenson III's good looks 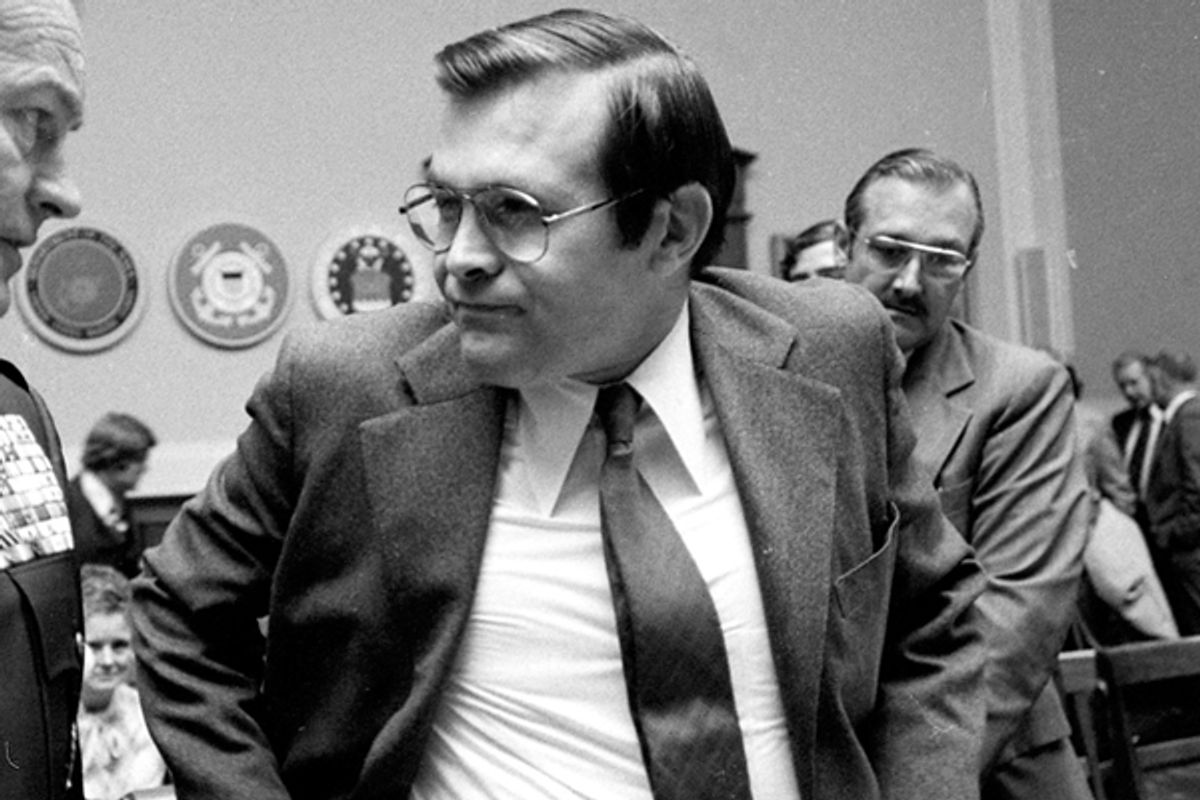 Former U.S. Seretary of Defense Donald Rumsfeld chats with Joint Chiefs of Staff Chairman Gen. George Brown prior to their testifying before the House Armed Services Committee in Washington in this Jan. 28, 1976 file photo
--

More true tales of Nixon from Donald Rumsfeld's vast document dump. Yesterday, we learned that Richard Nixon "doesn't shoot blanks." Today, we learn what Nixon thought of Congress, and how he planned for his favorite employees' futures.

In November 1972, shortly after Nixon was reelected, Donald Rumsfeld wanted to leave the executive branch and maybe run for office again. (He had been, prior to the Nixon administration, a congressman from Illinois.) He looked to have his eye on the Senate. First, though, he needed some good foreign policy experience -- he'd been stuck running the Office of Economic Opportunity, and then the Cost of Living Council, both organizations with mandates that Rumsfeld didn't agree with -- and so he had a meeting with the president, to discus his options.

Nixon was in a chatty mood, and Rumsfeld recorded his every thought, for his files.

First, Nixon was unimpressed with the entirety of the United States Congress: "The President said that the Senate and the House were a joke. There was no strength there."

Nixon promised to endorse Rumsfeld in the primaries if necessary, and also took a shot at the man Rumsfeld would most likely be running to defeat:

The President told me that he will endorse and support me. He said he couldn't before, but he will now even in primaries if it will help me. He said he felt I should decide now, and not tell anybody except for a few people. If I told any more it would be stupid, and I'm not stupid. He went on to say that Adlai Stevenson III was light. He was better looking than his dad, but he had no elan, that he could be beat, and that he, the President, wanted to do what he could to help me.

Adlai Stevenson III: Better-looking than his father, at least.

And about the new job? First of all, no more lame domestic policy: "He said he felt that I shouldn't go into the human resource area, HUD or HEW, and not DOT because he was going to be cutting highways and airports and that wouldn't be helpful to me politically."

Nixon wanted something meaty for Rumsfeld. But there was a lot to consider!

He said possibly Under Secretary of State for Economic Affairs. Possibly the UN, and then he said no that wouldn't be good that isn't particularly popular in Illinois, Commerce, he said maybe the international economic thing, possibly Secretary of the Navy, CLC, NATO, EEC, he said maybe something to do with Vietnam, but he said that depends on China and Russia. He said maybe something to do with China. And then he said but the best is Europe. That is the key and you do need some international activity. I said no on Vietnam, that didn't seem to make sense to me, nor did the UN, and I quite agreed with him on HUD and HEW and DOT. He said further that I felt that it would be important that whatever I did, did not appear to be a jury rigged, specially arranged job for me. I said this because earlier he'd indicated that if I stayed at CLC for awhile, then got some foreign experience fast and then went to Illinois in June of 1973, it would probably be best. I said the problem with that is that it would be a jury rigged kind of arrangement. I said that I felt it was important that whatever I did be an important activity, a substantive activity, and not an arranged one.

So in order to burnish his policy cred in preparation for a Senate run, Rumsfeld needed the president to get him a job that didn't look like a jury-rigged job arranged to burnish Rumsfeld's policy cred.

Nixon made Rumsfeld the ambassador to NATO. (The best is Europe, after all.) Instead of a Senate run in 1974, Rumsfeld returned to Washington after Nixon's resignation in order to work for his friend Gerald Ford.

Classic Rumsfeld: "NOTE: George Shultz and John Ehrlichman were neither helpful nor harmful. They were quiet."
And classic Nixon: "Don we will find it, we will find the right spot, and to use the chess analogy, Don, I want you to know that you are not a pawn."