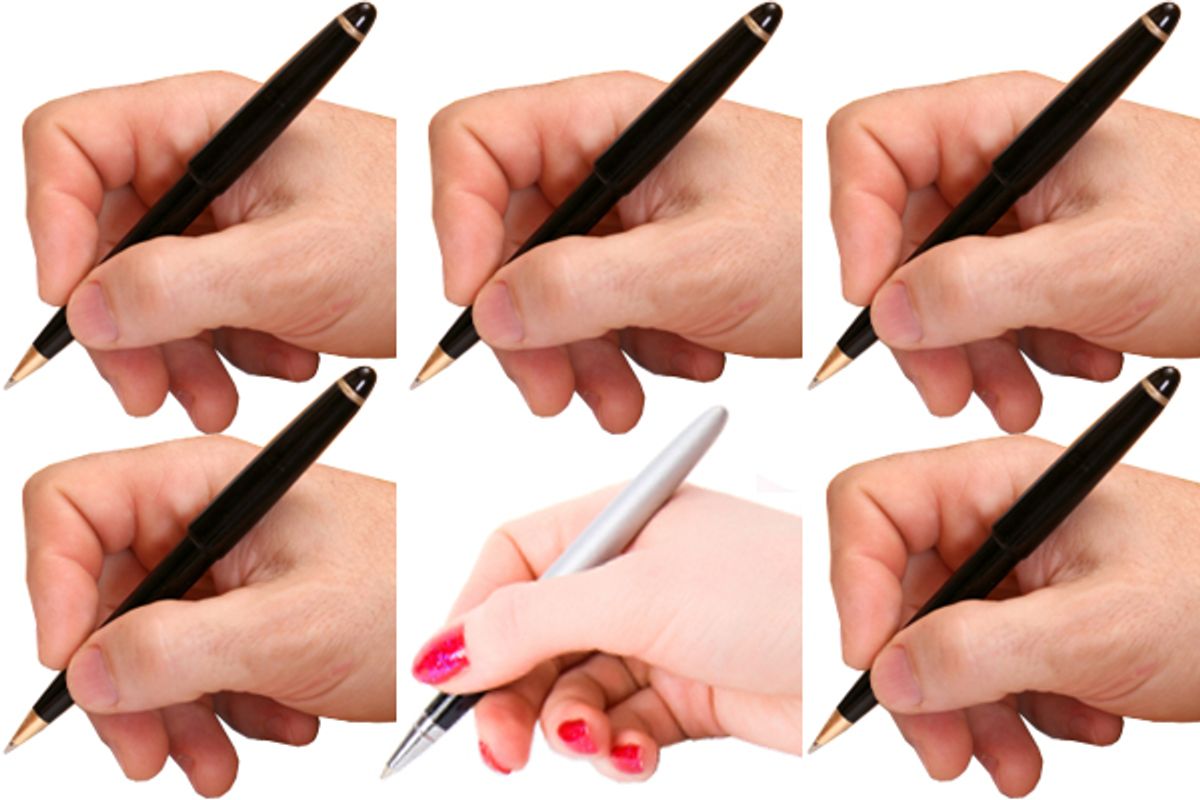 Last week, the website for Vida, an organization for "women in literary arts," published the results of a survey of 14 literary publications, American and British, ranging from the venerable New York Review of Books to such relative newcomers as Tin House magazine. They counted up the percentage of female contributors, female book reviewers and, finally, reviews of books by women. The results were dispiriting. Poetry magazine came the closest to parity, with its reviewers divided almost evenly and books by women constituting a slight majority of those reviewed (even if men still made up the majority of contributors overall). The New Republic and the New York Review of Books made the worst showings.

Someone runs a tally like this every decade or so, inevitably revealing that little has changed. The situation is distressing, yet mysteriously intractable; after the third or fourth iteration, there doesn't seem to be much new to say about it. This time around, however, three women on staff at the New Republic decided to dig a little deeper. A common response to the complaint that few books by women are reviewed in major literary publications is to ask whether fewer books by women are published in the first place. As Ruth Franklin reports, this does seem to be the case.

Franklin and her colleagues Eliza Gray and Laura Stampler examined the fall 2010 catalogs from an assortment of book publishers, large and small. They eliminated genres not likely to be reviewed by such publications as the New York Times or the New Yorker in the first place (that is, self-help, cookbooks, art, etc.) and found that one publishing house (Riverhead) could boast that women authors were responsible for 45 percent of its fall list. For most of the rest, women accounted for around 30 percent of the list, with small independent presses turning out to be even more male-heavy than a behemoth like Random House.

Franklin, who was chagrined to find that only 33 percent of the books she reviewed last year were by women, concluded that "magazines are reviewing female authors in something close to the proportion of books by women published each year. The question now becomes why more books by women are not getting published." Since publishing a book tends to burnish the reputation of a reviewer or essayist (just as publishing well-received reviews and essays in journals can lead to a book contract), the two situations are certainly intertwined.

The imbalance in books published is indeed a puzzle; book publishers, like any other business, want to make money, and multiple surveys indicate that women buy and read far more books than men do. (This fact has long been established within the book business, but since some Salon readers have questioned it in the past, please see the National Endowment for the Arts "Reading at Risk" report.) If women were only -- or even primarily -- interested in books by women, the logic of the marketplace would dictate that publishers should release more titles by female authors.

And here's where we have to get anecdotal. There's really no hard data on how many books by male authors are read by women readers and vice versa, nor are we likely to ever see any. But try this: Ask six bookish friends -- three men and three women -- to list their favorite authors or favorite books, without explaining your motivation. Then see how many male authors the women list and whether the men list any female authors at all.

A couple of researchers at Queen Mary College in London did something along these lines in 2005. They asked "100 academics, critics and writers" to discuss the books they'd read most recently. According to the Guardian, "four out of five men said the last novel they read was by a man, whereas women were almost as likely to have read a book by a male author as a female. When asked what novel by a woman they had read most recently, a majority of men found it hard to recall or could not answer." When it comes to gender, women do seem to read more omnivorously than men. Publishers can assume that a book written by a man will sell to both men and women, but a book by a woman is a less reliable bet.

Conventional wisdom among professionals in the children's book business is that while girls will read books about either boys or girls, boys only want to read about boys. Could it be that this bias extends into adulthood, with the preference among boys for male characters evolving into the preference among men for male authors? Or it could be that many male readers simply doubt that women have anything interesting to say.

Once traced back to the tastes of individual readers, the stubborn persistence of this imbalance becomes less mystifying. Editors can be shamed or pressured (temporarily, at least) into evening up the gender split in their bylines and book review sections, and some women have begun calling for subscription cancellation drives and other forms of economic protest after the release of the Vida survey results. But reading is a private, willful activity; good luck dictating to anyone which books they should read, let alone like.

We can, however, encourage our friends to try to broaden their horizons. Events like the Tournament of Books, soon to embark on its seventh annual contest over at the Morning News website, provide repeated examples of readers surprised to find themselves enjoying novels they'd assumed (on the basis of genre or subject matter or even cover art) they wouldn't like. A novelist I used to know once defiantly informed me (apropos of nothing we'd been talking about) that he'd never read a Jane Austen novel and had no intention of ever reading one. Deeming him something of a lost cause, I kept my mouth shut, but it was clear he expected me to get indignant, and to scold. Instead, I could only look at him with pity. The loss was entirely his.

The Guardian on a survey by Lisa Jardine and Annie Watkins of Queen Mary College, London on the cross-gender reading habits of men and women

The announcement of the 2011 Tournament of Books