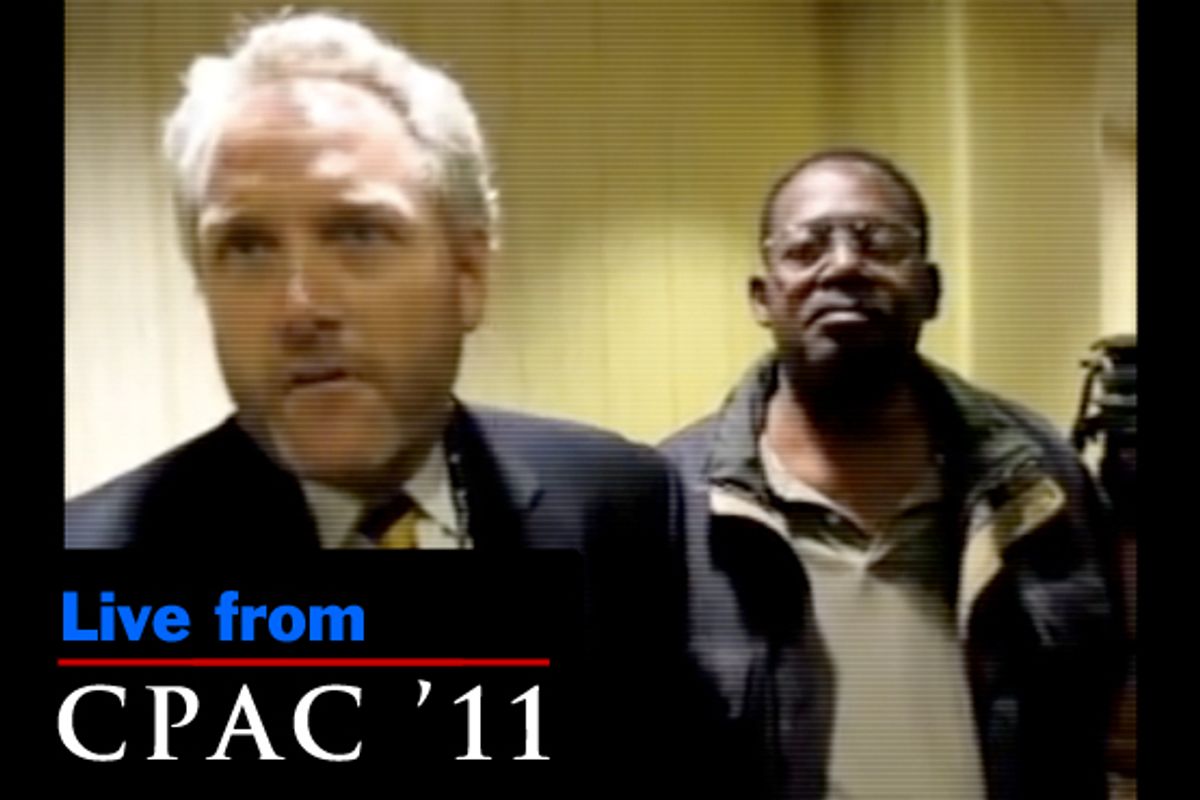 Andrew Breitbart is at CPAC again this year and his big issue is Pigford, a little-known legal settlement between the federal government and black farmers that Breitbart claims is rife with fraud.

Breitbart describes Pigford as his "obsession." When I caught up with him this morning and asked about Egypt -- specifically the claims by some of Breitbart's writers that the protests there mark the beginning of an Islamic caliphate -- he said he wasn't following the issue because he's been all Pigford, all the time, for months. (Watch my interview below.)

He's trying his best to force the alleged Pigford fraud into the mainstream media and use it to attack both the Obama administration and Shirley Sherrod, the obscure U.S. Department of Agriculture official who was made famous after she was attacked by Breitbart over the summer. (That "scandal" fell utterly apart in a matter of days, though not before the Obama administration had fired Sherrod.)

So what is Pigford?

It was originally a class action lawsuit against the government filed in the mid-1990s by a group of black farmers. The Department of Agriculture had discriminated against black farmers for many years in deciding how loans and grants were distributed. The government settled, and some farmers got a payout. But it subsequently emerged that many eligible black farmers had failed to take advantage of the settlement. So in December 2010, Congress appropriated another $1.25 billion to pay Pigford claims. It passed with bipartisan support, by unanimous consent in the Senate and a large majority in the House. (For a more in-depth history of Pigford, see this TPM piece.)

But some conservatives, notably Rep. Steve King, R-Iowa, have blasted Pigford as "slavery reparations" in disguise. He, like Breitbart, has alleged widespread fraud. They have argued that Pigford is an unwarranted payout to a Democratic constituency. Breitbart held a press conference here at CPAC featuring King, Rep. Michele Bachmann, and Eddie Slaughter, a black farmer who is angry because he did not get a Pigford payout that he believes was due to him.

How does Sherrod come into the story? She and her husband were the recipients of $13 million from the first Pigford settlement. Breitbart has since implied that Sherrod had some role in the alleged mismanagement of the program at the Department of Agriculture. Critics, like Media Matters, have argued that Breitbart is merely trying to salvage his reputation after the failed attack on Sherrod over the summer.

I talked to Breitbart, who made a point of having Slaughter, the farmer, present for the interview. Our conversation went considerably more smoothly than Breitbart's angry encounter with Salon at last year's CPAC. I asked him for his take on Pigford and challenged him to answer those who doubt credibility in the wake of the Sherrod fiasco.