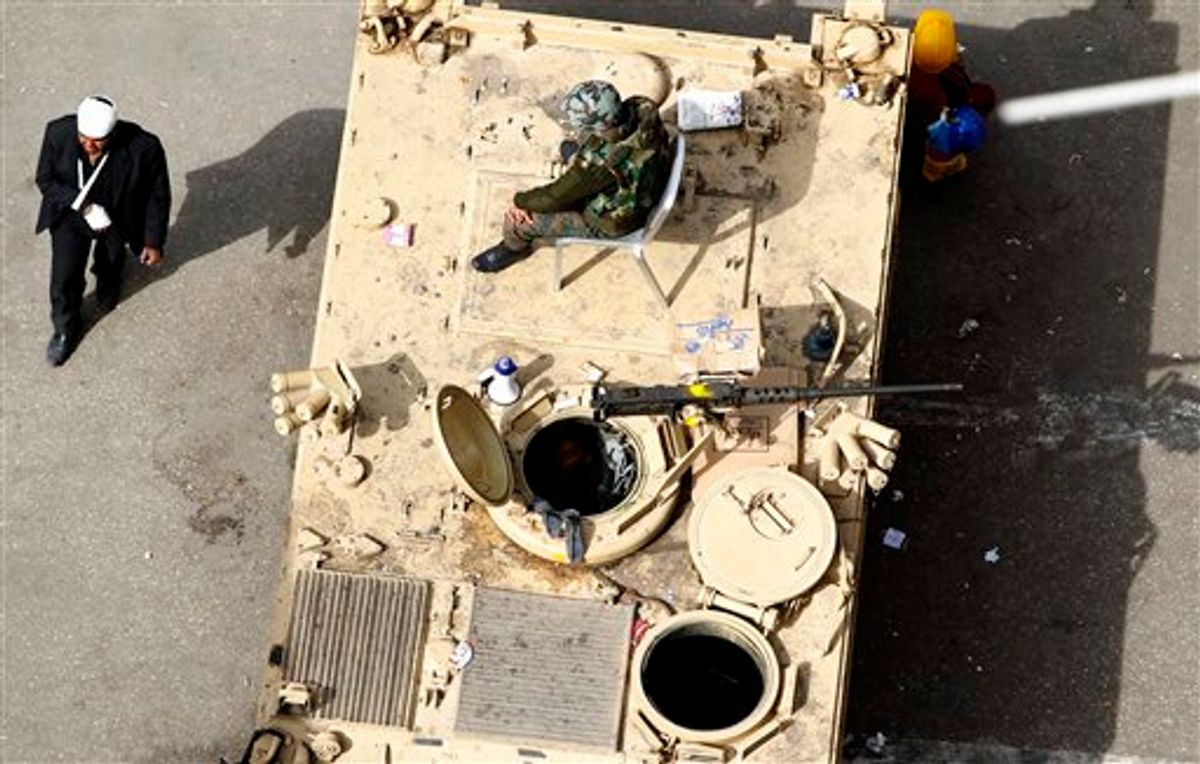 A wounded anti-government protestor walks past a military tank in Tahrir Square, Cairo, Egypt, Friday, Feb. 4, 2011. The Egyptian military guarded thousands of protesters pouring into Cairo's main square on Friday in an attempt to drive out President Hosni Mubarak after a week and half of pro-democracy demonstrations. (AP Photo/Tara Todras-Whitehill) (AP)
--

Egypt's military announced on national television that it has stepped in to "safeguard the country" on Thursday and assured protesters that President Hosni Mubarak will meet their demands in the strongest indication yet that Egypt's longtime leader has lost power. In Washington, the CIA chief said there was a "strong likelihood" Mubarak will step down Thursday.

The dramatic announcement showed that the military was taking control after 17 days of protests demanding Mubarak's immediate ouster spiraled out of control.

Gen. Hassan al-Roueini, military commander for the Cairo area, told thousands of protesters in central Tahrir Square, "All your demands will be met today." Some in the crowd held up their hands in V-for-victory signs, shouting "the people want the end of the regime" and "Allahu akbar," or "God is great," a victory cry used by secular and religious people alike.

The military's supreme council was meeting Thursday, without the commander in chief Mubarak, and announced on state TV its "support of the legitimate demands of the people." A spokesman read a statement that the council was in permanent session to explore "what measures and arrangements could be made to safeguard the nation, its achievements and the ambitions of its great people."

The statement was labeled "communique number 1," a phrasing that suggests a military coup.

Footage on state TV showed Defense Minster Field Marshal Hussein Tantawi chairing the meeting of two dozen top stern-faced army officers, seated around a table. At Tantawi's right was military chief of staff Gen. Sami Anan. Not present was Mubarak, the commander in chief and a former air force chief, or his vice president, Omar Suleiman, a former army general and intelligence chief named to his post after the protests erupted Jan. 25.

The head of the ruling party, Hossam Badrawi, told The Associated Press that he expects that Mubarak will "address the people tonight to respond to protesters demands."

The moves came after protests Thursday increasingly spiraled out of the control of authorities trying to contain the crisis. Labor strikes erupted around the country in the past two days, state employees revolted against their directors and workers began joining the anti-Mubarak protesters centered for the past 17 days in Tahrir Square.

On Thursday, hundreds of lawyers in black robes broke through a police cordon and marched on one of Mubarak's palaces -- the first time protesters had done so, even though the president was not in the building, Abdeen Palace, several blocks from Tahrir. Police lined up in front of the palace gates stepped aside for the marchers.

Tens of thousands were massed in Tahrir itself, joined by striking doctors who marched in their white lab coats from a state hospital to the square and lawyers who broke with their pro-government union to join in.

"Now we're united in one goal. The sun of the people has risen and it will not set again," one of the lawyers, Said Bakri, said before the series of military announcements.

Vice President Suleiman and the foreign minister have been warning of the possibility of a coup or imposition of martial law if the protesters did not agree to a government-directed framework of negotiations for reforms. The protesters demanded Mubarak step down first.