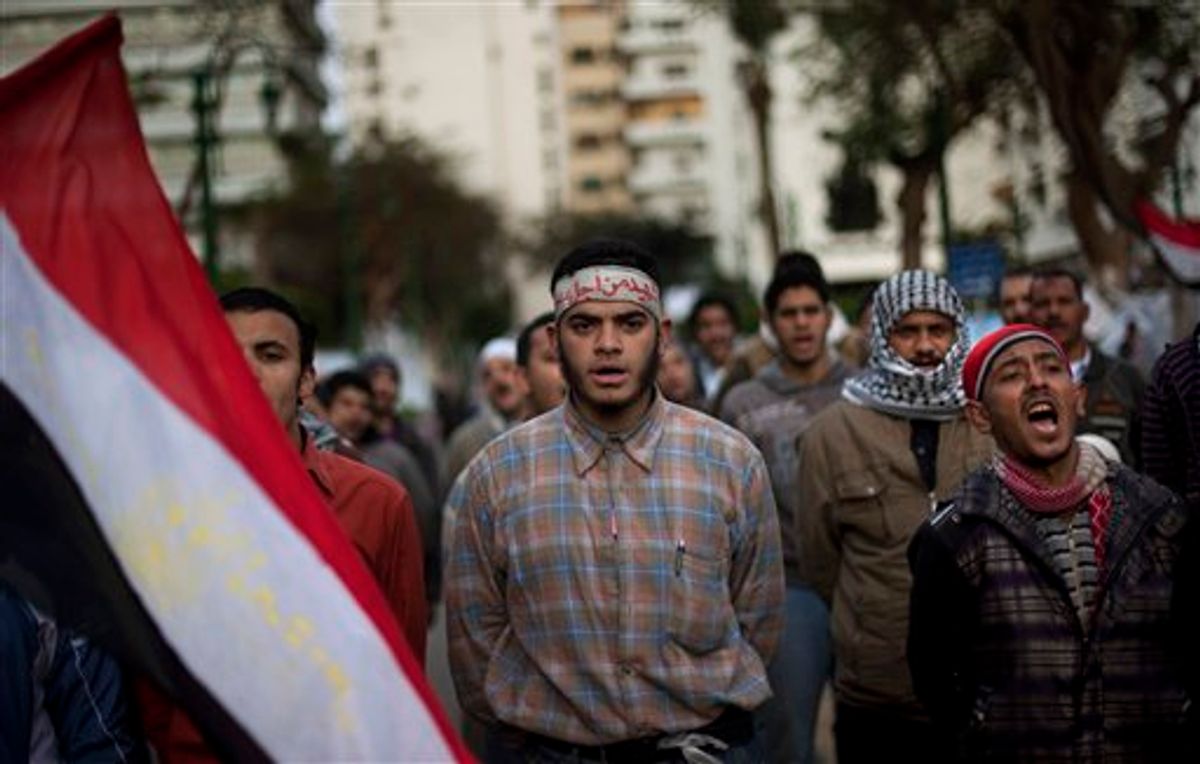 Anti-government protesters shout slogans as they line up after spending the night in front of the Egyptian Parliament in Cairo, Egypt, Thursday, Feb. 10, 2011. Around 2,000 protesters waved huge flags outside the parliament, several blocks from Tahrir Square, where they moved two days earlier in the movement's first expansion out of the square. (AP Photo/Emilio Morenatti) (AP)
--

Bus drivers and public transport workers in Cairo joined thousands of state employees on strike Thursday in spreading labor unrest that has pumped further strength and momentum into Egypt's wave of anti-government protests. With its efforts to manage the crisis failing, the government warned of the potential for a coup.

The warning from Foreign Minister Ahmed Aboul Gheit was the second from the regime this week that a coup could take place, a sign that the reinvigorated protests could face a new crackdown.

Speaking to the Arab news network Al-Arabiya on Thursday, Aboul Gheit said that if "adventurers" take over the process of reform the military "will be compelled to defend the constitution and national security ... and we'll find ourselves in a very grave situation."

Youth activists organizing the 17-day-old protests demanding the ouster of President Hosni Mubarak planned to up the ante even further, calling for an expanded rally on Friday, hoping to repeat a showing earlier this week that drew about a quarter-million people.

Khaled Abdel-Hamid, speaking for a coalition of groups behind the protests, said they wanted Egyptians to show up at six separate rallies on main squares in Cairo from which they would all march to Tahrir Square, which has been the focal point of the demonstrations. Thousands were packing the square on Thursday, vowing not to give up until the longtime leader steps down despite a host of sweeping government concessions.

Now the protests, focused on discontent over the regime's heavy hand on power, have tapped into the even more widespread anger over economic woes -- inflation, unemployment, low wages and wide economic disparites between rich and poor.

Strikes also have erupted in a breadth of sectors -- among railway and bus workers, state electricity staff and service technicians at the Suez Canal, in factories manufacturing textiles, steel and beverages and hospitals. Protest organizers have made a concerted effort to bring labor movements into the protests.

On Thursday, hundreds of doctors in white coats marched down a street from the Qasr el-Aini hospital to Tahrir, chanting "Join us, O Egyptian," witnesses said.

From another direction, crowds of lawyers in black robes marched from their union to the square, waving Egyptian flags and chanting "Mubarak, you pilot, how did you get $70 billion?" -- a referring to the president's past as the air force commander.

Egyptians have been infuriated by newspaper reports that the Mubarak family has amassed billions, and perhaps tens of billions of dollars in wealth while, according to the World Bank, about 40 percent of the country's 80 million people live below or near the poverty line of $2 a day. The family's true net worth is not known.

"We demand a trial of Mubarak and his regime; we are protesting corruption," said Mohammed Zarie, one of the marching lawyers, who said hundreds of lawyers arrived from provinces and planned to spend the night at the square.

The labor strikes come despite a warning by Vice President Omar Suleiman that calls for civil disobedience are "very dangerous for society and we can't put up with this at all."

Impoverished Egyptians are heavily dependent on public transportation and the strike threatened a new blow to the hard-hit economy.

Ali Fatouh, a bus driver in Cairo says buses were locked in the garages and won't be moved "until we achieve our demands," which include salary increases. He says organizers are calling on all 62,000 transportation employees to participate.

Some buses were still seen on the streets early Thursday and it's not immediately clear how widespread the strike is.

Mustafa Mohammed, a bus driver since 1997 who earns about 550 Egyptian pounds (about $93), said he Egyptians deserve a better life.

"We are immersed in debts," the 43-year-old driver said as he joined a crowd outside the administration building on the outskirts of Cairo. "We are staying until our demands are met. If our demands are not met, we will join Tahrir, and camp there."

He said the administration sent a senior employee to "throw us a bone" with a holiday bonus but that wasn't enough.

Egyptians have been infuriated by newspaper reports that the Mubarak family has amassed billions, and perhaps tens of billions of dollars in wealth while, according to the World Bank, about 40 percent of the country's 80 million people live below or near the poverty line of $2 a day. The family's true net worth is not known.

The protesters filling streets of Cairo and other cities since Jan. 25 have already posed the greatest challenge to the president's authoritarian rule since he came to power 30 years ago. They have wrought promises of sweeping concessions and reforms, a new Cabinet and a purge of the ruling party leadership, but Mubarak refuses their demands that he step down before September elections.

U.S.-based Human Rights Watch has said about 300 people have been killed since the protests began, but it is still compiling a final toll.

The White House warned Egypt's leaders to expect unrelenting protests unless they start to show real reforms and a transition to a freer society, dismissing governmental concessions so far as not having met even the minimum threshold of what people want.

Obama administration officials were also increasingly blunt in describing the limits of their leverage, reasserting that the United States is not seeking to dictate events in Egypt -- and that it cannot.

"We're not going to be able to force them do anything," White House spokesman Robert Gibbs told reporters Wednesday.

Still, Gibbs and other officials called on Egypt's leaders to end the harassment of activists, to broaden the makeup of their negotiations with opposition leaders, to lift a repressive emergency law, and to take up a series of other moves the Obama government has requested for days.