Anatomy of a revolution: Meet the young Egyptian activists who started it all

Here's a full breakdown of the Egyptian protests, explanations of the moving parts, and profiles of the activists 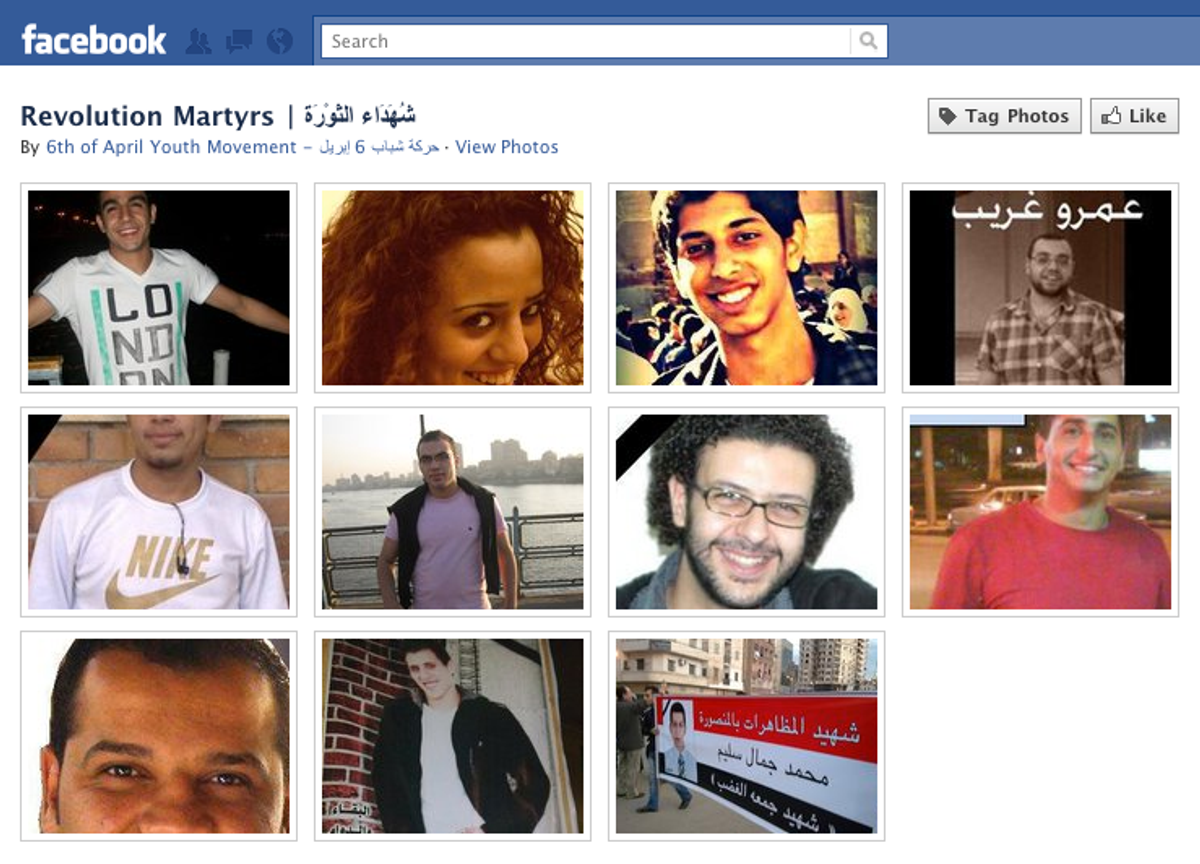 Tahrir Square swells with protesters for the 17th consecutive day. Some say the crowds today are the biggest yet as labor unions strike in order to join the thousands who have vowed not to leave Cairo's focal point until President Hosni Mubarak steps down -- which many hoped would happen today. The protests will rage more furiously in the coming days, and as the world watches, some fear the movement will reach a violent breaking point as the Egyptian people struggle to take back their country.

So who were the people who lit the fuse in hopes to spark a revolution? The movement -- some refer to it as #Jan25 indicating the watershed moment in the streets of Egypt -- has captivated the world and reminded Middle East leaders of an impassioned crowd's explosive power. The Jasmine Revolution in Tunisia sparked the initial protests, but the scale of activism suggests the presence of some kindling, some existing network of activists that mobilized quickly and effectively. But who was in charge? Who were the organizers on the ground, the administrators of the Facebook pages, the would-be revolutionaries? Who started it all?

As the media is wont to do, journalists have been struggling to single out the leader, the face of the revolution. Mohamed ElBaradei, the Nobel Peace Prize winner and many years expatriated diplomat, stepped forward first. But he flew into Cairo after the Janu. 25 protests had started, and despite his national hero status, would have been too disconnected from Egypt to orchestrate a revolution.

Enter Wael Ghonim, the stark-eyed Google executive who was kidnapped and secretly detained for nearly two weeks. When Ghonim emerged from the state police's secret detention spot, he cried and told the families of those who had lost their sons and daughters in the struggle not to blame themselves, but blame the leaders who refused to surrender power. Having helped orchestrate a Facebook campaign, Ghonim humbly bowed to those who took to the streets in an emotional interview on Egypt's most popular talk show. "[All I did was] use a keyboard," Ghonim said. "The real heroes are the ones on the ground."

Yesterday, the New York Times offered a glimpse into the lives of those young people on the ground. And it is the young people who are driving the revolution in Egypt. According to Foreign Policy's Ellen Knickmeyer, "Rather than the Arab world's usual suspects -- bearded Islamists or jaded leftists -- it is young people, angry at the lack of economic opportunity available to them, who are risking their lives going up against police forces." These young people are also more urban, more educated and more technologically empowered than any previous generation. The young organizers, some are calling them "cyberactivists," had been talking and working together longer and more closely than anyone realized. The movement in Egypt started years ago, existed online and out of the world's view, where it could well up tacit support from many over time.

In an interesting and even ironic way, the resistance in Egypt can be traced back to President George W. Bush and the war in Iraq. Protesting against Bush's violent means of spreading democracy, a loosely formed group organized the largest demonstrations in Egypt's history around the March 20, 2003, invasion. They eventually became known as Kefaya, meaning "Enough." Adopting the mission to bring down Mubarak and restore power to the Egyptian people, Kefaya held regular protests that called for the end of the emergency law, more freedom for the Egyptian people, and better handling of the economy -- essentially similar demands seen in Tahrir Square today. After heavy activity in 2004 and 2005, the movement fizzled due to apparent conflicts between the Islamic and liberal activists.

Out of Kefaya grew the April 6 Youth Movement whose members and affiliates played an integral role in this year's #Jan25 demonstrations. The group formed in order to support workers in the industrial town of Mahalia al-Kubra during an April 6, 2008, strike, organizing primarily through a Facebook group. Inheriting from Kefaya the lofty goal of displacing Mubarak, the group swelled to 70,000 young, highly educated and generally affluent activists by 2009.

After garnering international media attention for the heated debates held on the page, the April 6 movement also caught the attention of the U.S. State Department when protests began this year. A diplomatic wire released by WikiLeaks shows that American officials thought little of the Facebook uprising. It reads: "April 6's stated goal of replacing the current regime with a parliamentary democracy prior to the 2011 presidential elections is highly unrealistic, and is not supported by the mainstream opposition." Combined with the forces of other movements, though, the impact of the April 6 Youth Movement is nothing short of historic.

The following cast of characters -- many affiliated with the April 6 and Kefaya groups -- represent the critical appendages of the movement's anatomy. Working together as a body of dissent, they turned Egypt's uprising into a revolution.

Teresa Cotsirilos, Peter Finocchiaro and Justin Spees contributed to the reporting for this story.