The Church of Scientology's friends in Washington

The embattled religious organization has allies in Congress, though it lobbies quietly 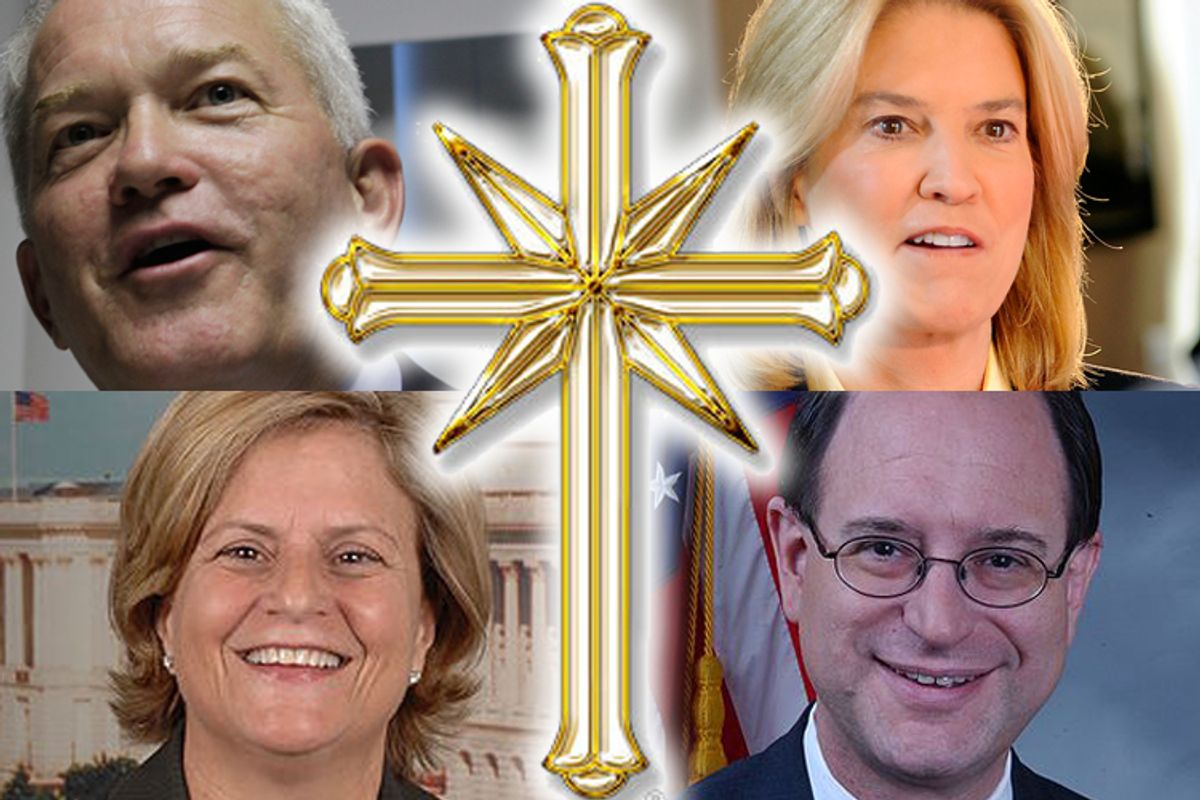 Did you read that New Yorker piece on the Church of Scientology? You really have to. I know it's long, but it's worth it. If you're short on time, there are a lot of summaries.

Along with some incredible new details, there are the previously reported stories of rampant physical abuse of underlings by church head David Miscavige, the church's "Sea Org" full of underage workers signed to "billion-year contracts" performing manual labor for little to no money, and the tales of the church separating families and milking its members for thousands of dollars. The church is even under investigation by the FBI for what could amount to human trafficking.

And, of course, like any other moneymaking American enterprise, it has good friends in Washington.

As far as I know, the only Scientologist to ever actually serve in Congress was the late Sonny Bono. His widow, Mary Bono Mack, who inherited his seat, attended courses, but never took to the religion.

Former Rep. Ben Gilman, R-N.Y., received thousands from the church, and, in return, as chairman of the International Relations Committee, he complained on several occasions that European nations were discriminating against Scientology. Or, put another way: "[On] the same day (July 2, 1998), ten prominent Scientologists donated a total of $7,400 to Congressman Benjamin A. Gilman's coffer -- three months before he signed on as a co-sponsor to Matt Salmon's House of Representatives bill that was critical of Germany's protection of religious freedom ..." He was also thanked with this glowing profile in the church's Freedom magazine.

Brad Sherman, D-Calif., and Ileana Ros-Lehtinen, R-Fla., are two of the church's best friends currently serving in Congress. They were both honored at a 2004 Celebrity Centre gala. (Here's Ros-Lehtinen with John Travolta and Kelly Preston, and here's Brad Sherman praising the church publicly.)

The church avoids "official" political donations (it is, after all, a tax-exempt religious organization), but prominent members still support politicians and politicians return the favor. Florida's Mark Foley was a Scientology ally. (It was rumored that he checked into a church-affiliated recovery center after his resignation from Congress.) As a state legislator, Nevada's Sharron Angle supported a Scientology-affiliated drug treatment therapy program for prisoners.

Craig Jensen, founder of the software company Diskeeper, and his wife, Sally Jensen, are major Scientologists, and their donations help identify which politicians are friendliest to the church. Former congressman James E. Rogan, now a Bush-appointed judge on the Superior Court of California, received thousands of dollars from prominent Scientologists throughout the 1990s. Even Ron Paul gets Scientology love, because he supports its tax-exempt status and opposes mental health screening for children.

And, of course, Sarah Palin is personal friends with prominent Scientologists Greta Van Susteren and her husband, attorney John Coale. Coale helped Palin start her PAC -- and he once proposed starting a Scientology PAC, in the 1980s. At the time, the idea fizzled out.

But Scientology actually had a semi-open PAC for a few years, called "Citizens for Social Reform." The church hasn't donated anything in the last two cycles, but before that, it gave to the following pols:

The church has had, throughout its history, plenty of friends on both sides of the aisle. Or, at least, plenty of people willing to cash its checks. Few prominent politicians, that I know of, have said much about the things we've learned about the church more recently.

[Correction: Judge James Rogan serves on the Superior Court of California. He was nominated for the seat by then-California Governor Arnold Schwarzenegger in 2006, and won election to the seat in 2008. He was nominated by President Bush for a seat on the U.S. District Court, but his nomination stalled in the Senate. I apologize for the error.]