The corporate titan eyes new homes in cities like New York and Washington, much to the chagrin of many residents 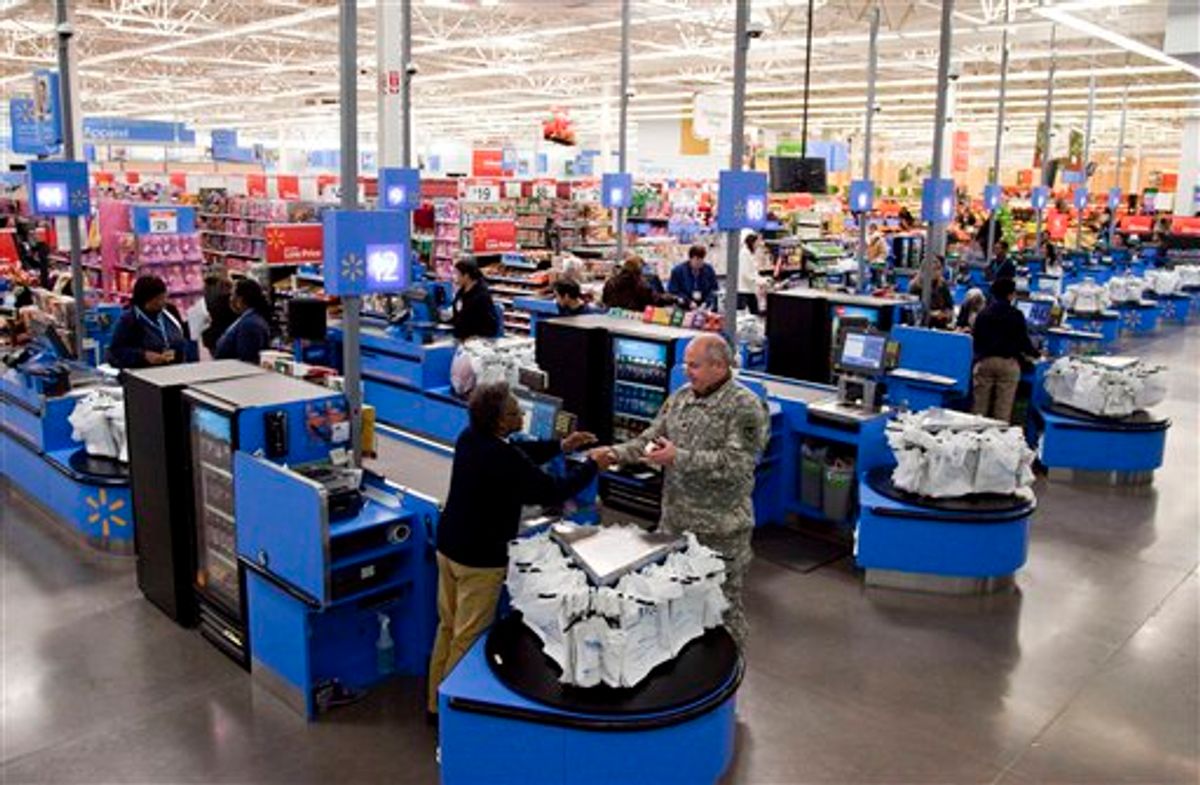 In this photo taken Dec. 15, 2010, the check-out inside a Wal-Mart store in Alexandria, Va., is shown. The battleground for the biggest fight in retailing today is being played out along this suburban highway. Going head-to-head: Wal-Mart against everyone else. (AP Photo) (AP)
--

Wal-Mart and ubiquity enjoy a curious synonymity. Now over 50 years-old, the store sells everything. And they pride themselves on selling everything for a low price everywhere in the country. But one frontier has continually eluded its grasp: big cities like New York and Washington. Pointing to persistent high unemployment and poor food options in urban centers, the Bentonville, Arkansas-based mega-corporation now thinks it's found a workaround.

Much has already been made of Wal-Mart's campaign to open a store in New York City. America's signature city is equipped with many a deli, pizzeria, restaurant and super market -- not to mention a fleet of Duane Reades -- but nary a Walmart. And that's the way some New Yorkers would like things to stay, arguing that it would hurt local business and residents.

Wal-Mart argues that its addition to New York would help a city still struggling with high unemployment and a dearth of fresh, healthy food. It even launched a website -- suggestively titled WalmartNYC.com -- chock full of figures, arguments and even local testimonials. (Plus, the uber-capitalist readers at TheStreet.com think it's a good idea. So there's always that.)

Many don't buy the arguments, though. In the words of Matt Ryan, executive director of New York Jobs with Justice and Urban Agenda:

With our city struggling with persistent unemployment and 3 million New Yorkers lacking access to fresh produce in their neighborhoods, the jobs problem and food desert problem are unquestionably real. But asking Walmart to fix those problems is like asking a fox to fix a henhouse.

Meanwhile, Wal-Mart also has designs for a major expansion into the nation's capital, aiming to launch four new stores in the Washington area. Similar anxieties abound, though the Washington Post (not unsurprisingly) seems to favor the move.

Per The Atlantic Wire:

The plan to take our nation's capital is disconcerting on a variety of levels. First, one Walmart is roughly equivalent to at least 8 other normal stores -- doesn't four seem superfluous? Is it one for each quadrant? An outlet for each branch of our government (including the Press as the fourth, of course)? Will they include a restaurant for lobbyist lunches?

For what it's worth, Wal-Mart opened a location on the West Side of Chicago back in 2006, with reportedly less-than-exemplary results for the community. According to the BBC:

Professor David Merriman, who led the research, saw no evidence of an increase in sales in Wal-Mart's vicinity, based on tax revenues in the store's postal code area. Of all the existing businesses within four square miles of the store, a quarter closed within two years of Wal-Mart's opening day.

"Adding Wal-Mart is not an effective strategy to increase employment or economic development," says Prof Merriman, and cites other national studies with similar results.

Boon to business or community killer? Whatever the case, neither side seems likely to back down.