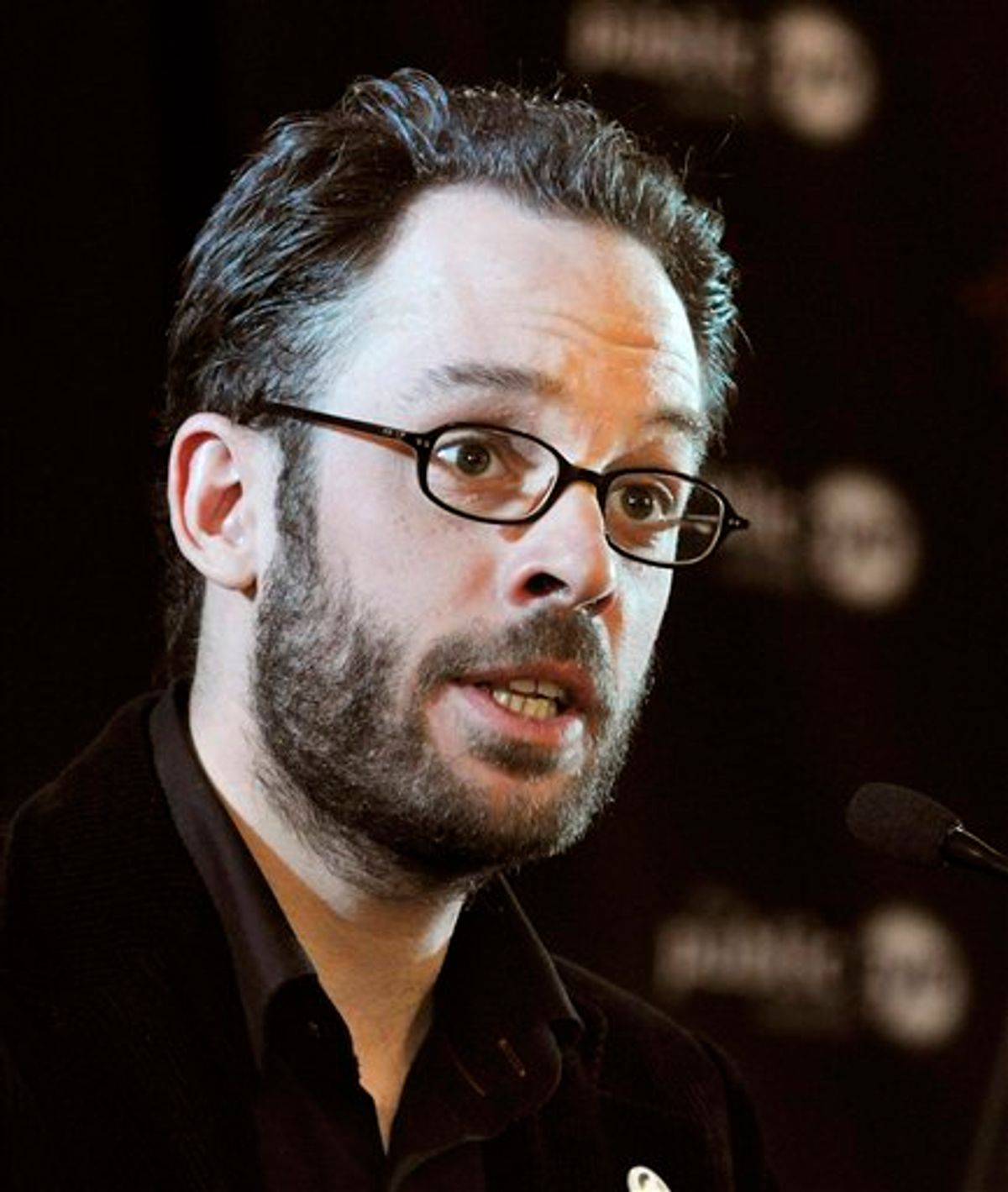 FILE- In this file photo dated Friday Jan. 28, 2011, provided by Greenpeace, showing Daniel Domscheit-Berg during a news conference in Davos, Switzerland, on Friday, Jan. 28, 2011. Domscheit-Berg is about to publish a book it is announced Monday Feb. 7, 2011, giving his insider account about secret spilling website WikiLeaks, entitled "Inside WikiLeaks: My Time with Julian Assange at the World's Most Dangerous Website". Daniel Domscheit-Berg is the former spokesman for WikiLeaks, but left the site dramatically in September 2010 because of a differences of opinion with founder Julian Assange. (AP Photo/Greenpeace, Markus Forte, file) NO SALES, MANDATORY CREDIT, EDITORIAL USE ONLY (AP)
--

A tell-all book by a former WikiLeaks insider casts founder Julian Assange as an "emperor" who has become just the kind of public figure he is trying to expose.

Daniel Domscheit-Berg, the former WikiLeaks spokesman who left the secret-spilling website after a bitter dispute with Assange, writes about his euphoria at the website's spectacular rise as well as his disillusionment with a leader he describes as delusional and power-crazed.

The Associated Press reviewed a German-language copy of "Inside WikiLeaks: My Time with Julian Assange at the World's Most Dangerous Website" ahead of its release Friday in 16 countries. Domscheit-Berg was launching the book Thursday with a press conference.

"WikiLeaks turned pale computer geeks, whose cleverness otherwise would not have been noticed by anybody, into public figures, who put fear into politicians, CEOS and military chiefs around the world," he writes in the book.

But Domscheit-Berg, who last month launched a rival website called OpenLeaks, also traces the arc of an increasingly fraught relationship that eventually erupts into conflict.

WikiLeaks' original mission to "control the power executed behind closed doors and to create transparency, where it was being denied" deteriorated into a situation in which the group was "gradually corrupted by power and secrecy itself," he writes.

Disputes sprang up over money, lack of transparency and Assange's belief in conspiracy theories, he claims. Assange was certain "we wouldn't be safe walking down the street, that our mail and suitcases were being X-rayed, that we had to go underground ... and needed bulletproof vests," the book says.

The breakup came in September after Domscheit-Berg challenged Assange's leadership qualities. The former spokesman -- who then went by the alias Daniel Schmitt -- claims his rebellion got him kicked out of WikiLeaks, something Assange has publicly denied.

"A leader communicates and cultivates trust in himself. You are doing the exact opposite. You behave like some kind of emperor or slave trader," Domscheit-Berg recounts telling Assange in their final computer chat. WikiLeaks spokesman Kristinn Hrafnsson said he had no immediate comment.

Domscheit-Berg, a 32-year-old German computer scientist, told the AP in an interview that "Assange became exactly the kind of person he despised and wanted to fight."

"It is therefore very important that it is made clear how everything went down and why, in the end, we decided to leave the project -- and that is something that Mr. Assange has described the wrong way," Domscheit-Berg said.

Domscheit-Berg's book will be released in Germany, Australia, South Korea, Britain and 12 other European countries on Friday. In the United States, it will be published four days later, on Feb. 15. Other countries including Japan, Brazil, and Russia plan publication soon.

WikiLeaks touched off an international uproar in April 2010 when it released a classified helicopter video showing a U.S. attack that killed two Reuters journalists in Iraq. It later began publishing tens of thousands of U.S. military documents on the wars in Afghanistan and Iraq, and classified U.S. diplomatic cables whose revelations angered and embarrassed the U.S. and its allies.

Assange told a London audience in September that the German had been suspended -- although he declined to go into details. He denied there had been a dispute over his management. "It was about a different issue," Assange said. He refused to elaborate.

Several reporters from The Guardian, The New York Times and Der Spiegel, who were involved in their news outlets' publication of leaked WikiLeaks documents, have also written books on their dealings with the group and Assange that will be published soon or are already available.

Assange, who is currently fighting an extradition trial in London over rape allegations in Sweden, is also planning to publish his own version of events in April.

In launching OpenLeaks, Domscheit-Berg said he planned to give whistleblowers more control over the secrets they spill. He has criticized WikiLeaks for both receiving documents and aggressively vetting how they are presented to the public.