Do we need B. R. Myers' moral crusade against foodies?

B.R. Myers' excoriation of food lovers in the Atlantic is furious and vicious. It's also dumb and sad 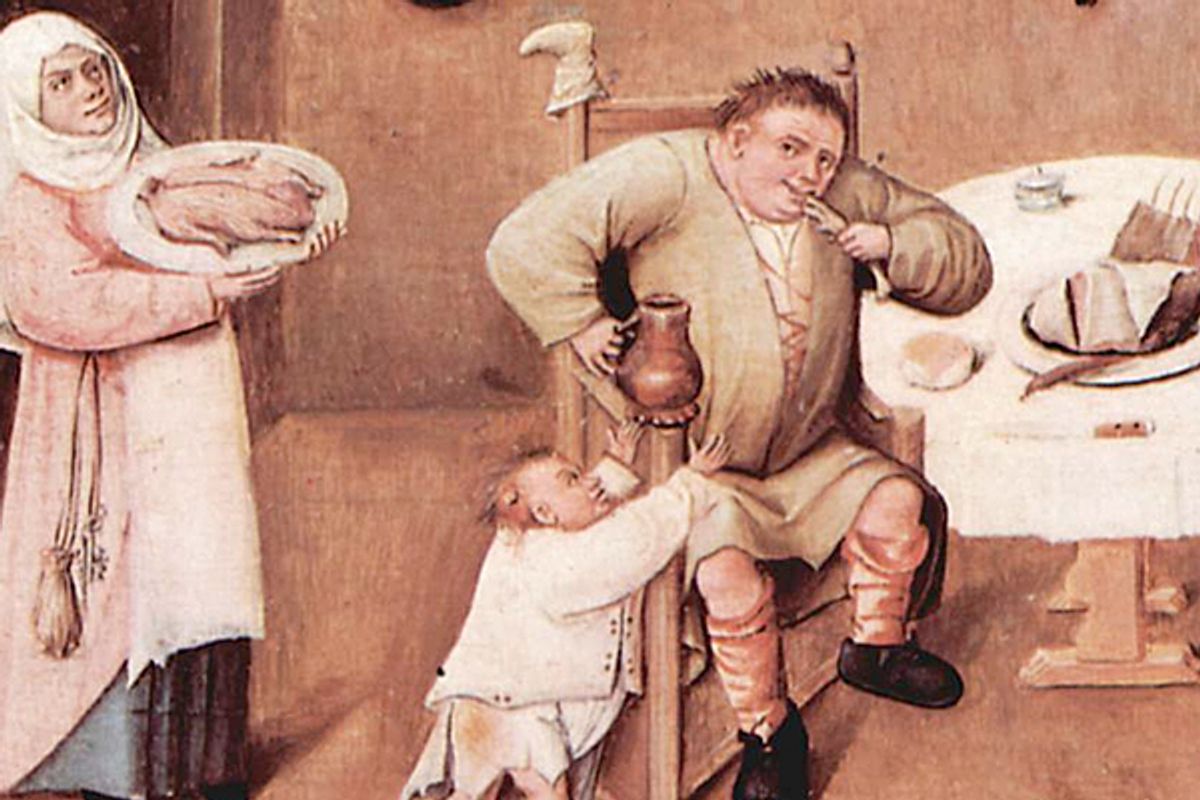 A detail from "Gluttony," in the painting "The Seven Deadly Sins and the Four Last Things" by Hieronymus Bosch
--

Look, I hate "foodies" as much as the next guy. You know the people I'm talking about -- taking pictures of every plate, crowding out conversation with their pointless listing of chef names, crowing about their collecting of fancy dinners like they were baseball cards. And yet, when B.R. Myers' grim-faced revolution comes, as a food writer I will be lumped in with them to face the firing squad.

Myers' invective against food obsessives in the March issue of the Atlantic, "The Moral Crusade Against Foodies," drips disgust with us. (And again, I use "us" loosely: Is MFK Fisher the same as the guy who takes his iPhone on bacon-eating dates?) He shows his contempt by starting the essay with an illustration of our, er, earthiest selves. He quotes the casually transgressive Anthony Bourdain suggesting that cooking should be encouraged with something approaching physical force. He cherry-picks a bit from chef/writer Gabrielle Hamilton, in which she likens chicken entrails to "bloody jewels." And then he follows with a sentence from journalist Kim Severson that begins, innocuously enough, "What blessed entity invented sugar and cacao pods and vanilla beans ... ?" Well, Myers finger-wags, that tells you that food lovers obviously have neither real God nor grace.

By then, you're strapped in for 3,800 more words, composed in variations of the following: Foodies are borderline evil. Also, stupid idiots.

There are several discussions of the grotesque moral rationalizing of meat-eating. That is certainly fair, if rewritten from a similar piece he wrote a few years ago, but is it the foodies who should take the blow of that strike, or all meat eaters? But then Myers goes on weird, so-angry-the-spittle's-flying tangents, like how foodies' preference for meat from small farms isn't about ethics or flavor or sustainability, but rather "largely motivated by their traditional elitism," because "it has always been crucial to the gourmet's pleasure that he eat in ways the mainstream cannot afford." Who confesses this to him? How does he figure this out? Who is this cynical foodie he's talking about? Who knows? But he's out there somewhere, and he's a stupid jerkface.

Later, Myers continues to scream "Get off my lawn!" at foodies who are interested in cultural tradition. To his mind, they only respect the sort that allows them to eat ever more (and more repugnant foods, apparently, like cats). Restrictive traditions, such as keeping kosher, he claims, are inevitably the target of foodie sabotage, like how they're always forcing Jews to eat pork and laughing about it. (Seriously, he says this.)

At this point, you might be thinking that this is some pretty straw-man stuff, and you'd be right. Reading this thing is like going to a football game on homecoming weekend at Straw Man State U.

And sadly for him, Myers' faux-populist ranting is betrayed by his own obvious elitism.

And when foodies talk of flying to Paris to buy cheese, to Vietnam to sample pho? They're not joking about that either. Needless to say, no one shows much interest in literature or the arts -- the real arts. When Marcel Proust's name pops up, you know you're just going to hear about that damned madeleine again.

Yes, yes, Proust and that damned madeleine. It is one of the most-abused clichés in food writing, and yes, it is mostly abused by people who don't know the second thing about Proust. "How dare these philistines besmirch his name with their petty concerns! Don't they know to let the real thinkers speak of the 'real arts'?" Myers practically seethes.

It's silly to refute someone whose argumentative strategy is, "There are people who annoy me, and they are obviously not capable of speaking of high-minded things because I have not encountered them doing so." But sure, I'll take the bait.

Just yesterday, I talked with a famous chef who made his name on innovation. He has a new restaurant, where the purpose is to re-create dishes from another time and place. Our conversation was fascinating and wide-ranging -- we wrestled with whether such a restaurant would become a museum, a place where old ideas are encased in amber, or whether it can breathe life into those cast-off cuisines. We wondered about the dueling responsibilities and urges of a chef to be creative while also hewing closely to recipes written 100 years ago. We asked each other about the very notion of "authenticity" in presenting this food, when its documentation exists only in the form of a vaguely worded book that explicitly states that these dishes should be made according to the perspective of the chef preparing them.

What's sad about Myers' rant, though, is that while whipping foodies for being incurious about anything other than what goes in their fat dumb mouths, he exhibits his own willful ignorance. At one point, he sneers at a

sort of milk-toast priest, anthologized in Best Food Writing 2010, who expounds unironically on the 'ritual' of making the perfect slice:

"The things involved must be few, so that their meaning is not diffused, and they must somehow assume a perceptible weight. They attain this partly from the reassurance that comes of being 'just so,' and partly by already possessing the solidity of the absolutely familiar."

If Myers is capable of glee, I'm sure he could hardly believe his luck in coming across a foodie so painfully dull as to actually glorify milk toast, the greatest cliché of mediocrity in the English language. But he doesn't have the generosity of spirit or imagination to allow that the milk toast priest may be serious precisely because the object of his interest has never been deemed worthy of consideration in the past. Isn't that one of the central points of writing and art? To see and share the complexity in the overlooked world?

Myers offers no sense that there might be value, however odd or small, in this kind of examination. He offers no sense, even, that a person interested in food can actually process it as an interest. No, in his world, there are only "truly sociable human beings" and then there are "foodies," and foodies are like zombies feasting on what they wish were actual human brains. (Because, of course, the more amoral the taste, the better.)

Myers' problem isn't, then, so much that foodies are philistines, but that food, and perhaps the people who prepare it, are below consideration. He could be writing this rant about people with ant farms, if people with ant farms started showing up in the New York Times a little too often for his tastes. While mocking the notion that guests -- gasp! -- might be expected to eat what their host has served them, he wonders, "Is there any civilized value that foodies cannot turn on its head? Enjoinders to put the food provider's feelings above all else are just part of the greater effort to sanctify food itself."

Here are Myers' prejudices on display. It is a "civilized value" that the host please the guest; what is being inverted is not that the guests must have "greater obligation" to please the host, but that the guest enters the interaction with any sense of responsibility at all. Underneath the hyperbolic language, I smell a contempt for the idea of honoring the subservient. And, more saliently, in his rage against "sanctifying food," that food itself is base material; it is not worthy of consideration and reverence.

How joyless! How sad and dour he must be. I cook food because I love food. I eat food because I love food. But I write about food because I love people -- I love the stories of people who cook and eat and share food, of how they come together around it, how they see the world through it, and how you can see a part of them through it. To me, these stories, these connections are full of wonder and surprise. Sometimes they're complicated and painful, sometimes they're generous and happy. To revel in that is to understand the power of food, and, for me, to be in a joyful place. But maybe I just suffer from "an uncomprehending dullness of mind."

The greatest evidence of Myers' own dourness is his omission of any of the joy of food writing. A lot of that published joy is, yes, one-note. It's not articulated brilliantly, it doesn't resonate with readers, it can be boring. But even at that, its greatest sin is that it is an uninteresting outward expression of an inward joy. But Myers either discounts or doesn't see that; he sees it all as macho gamesmanship and narcissistic navel-gazing.

Getting away from the food books he had been sentenced, by assignment, to read, he writes, is like "stepping from a crowded, fetid restaurant into silence and fresh air." But what restaurant have you ever been to that was both crowded and fetid? Why would a stinky place be so popular? Maybe Myers would be happier if he went to better restaurants.