No. 6: Jennifer Gilmore's "Something Red" 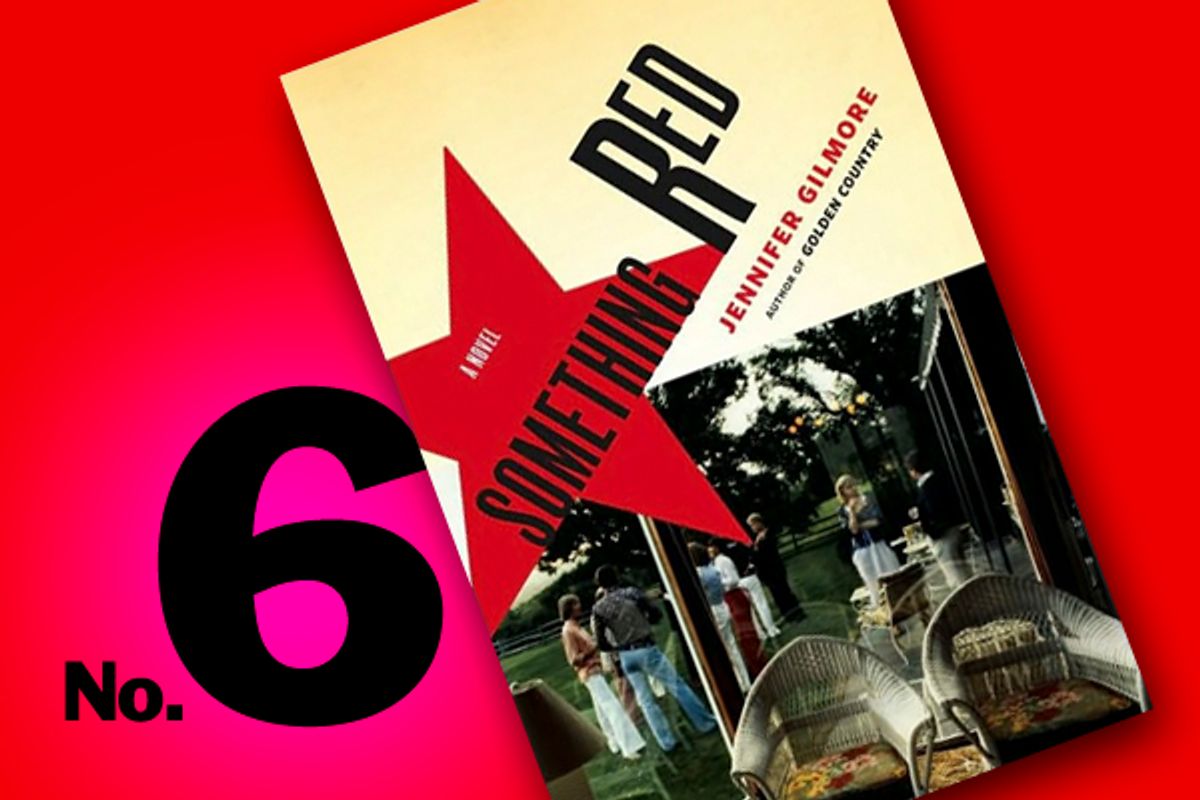 They took a room in the Marriott Hotel, along East-West Highway in Silver Spring, just a few miles from where she had lived for the past thirteen years. The room was twelve floors above the conference where they had each pledged to have no relations with other LEAP!ers for thirty days in order to let the high of the tenets dissipate a bit. One needs a more solid head, the leader had said. To decide such things.

Elias opened her blouse slowly, twisting each button with his thumb and third finger, then running his finger along her breastbone. When her shirt finally fell open, he studied her, then caressed her breasts. Was he putting her on? He licked her nipples, then moved his lips slowly down her stomach, and Sharon couldn’t have cared less if he was. Elias removed her underwear, and kissing her just above her pubic bone, he slipped two fingers inside her. Sharon moved into his hands until he stopped suddenly, removing his fingers as if he’d thought better of the whole thing. While Sharon propped herself up on her elbows to see what had happened, Elias got up and opened his wallet. Was he moving to pay her? Before? Or worse -- and now she thought of Midnight Cowboy, she’d been so scandalized by that film -- was he expecting her to pay him? She wondered how much a man like Elias would cost.

Instead, he removed a joint from the wallet, took a lighter from his front pocket, lit it up, leaned over the bed, and passed it to Sharon, who took a deep drag. She passed it back to Elias, who, still standing, took another hit. Sharon unzipped his jeans. He wasn’t wearing underwear, and Sharon could see instantly that he had a longer, thinner penis and was far hairier than Dennis, who always felt and looked unbelievably clean. Elias smelled dusky and deep, and as she leaned in, she was surprised to discover that he was uncircumcised.

After Elias had entered her and after she wrapped herself around him as he’d made love to her, allowed herself in that single moment to be carried, Sharon stood, zipped up her slacks, slipped on her blouse, and said to Elias that since he didn’t have a house to go to, he could have the room, she was going home. But then he reached his hand out and grabbed her by a belt loop.

"Stay with me." His mouth was at her ear. He kissed her nape. "Don’t leave," he’d said, unzipping her pants for the second time.

Again, he stopped suddenly. "Wait here," he said, just as he had removed her left pant leg. "I need to get something from my car." He let his fingers graze her crotch over her underwear before getting up from the bed.

Sharon sucked in her breath and fell back into the pillow. "Sure," she said. "Why not." Already she imagined being one of those women, waiting and waiting, flipping through the channels using the remote, a luxury they didn’t have at home. There would be the hostage crisis, today was day number twenty-eight; how much longer could this go on? She imagined staring at the ceiling, which, as Elias had lifted her head and leaned over her, inching himself in, she had noticed had a wet stain on the yellowing stucco.

"I’m coming right back," he said, hopping on one leg as he pulled on his jeans.

"Okay." She wondered if he would leave her with the bill.

Sharon couldn’t help it; she rolled on her side, leaned on her elbow, and watched him dress. She liked his lithe body, covered in dark, curly hair. It didn’t really matter to her; it was absolutely for the best if he did not come back.

Jennifer Gilmore is the author of "Golden Country" -- a New York Times Notable Book of 2006. "Something Red" is her second novel.