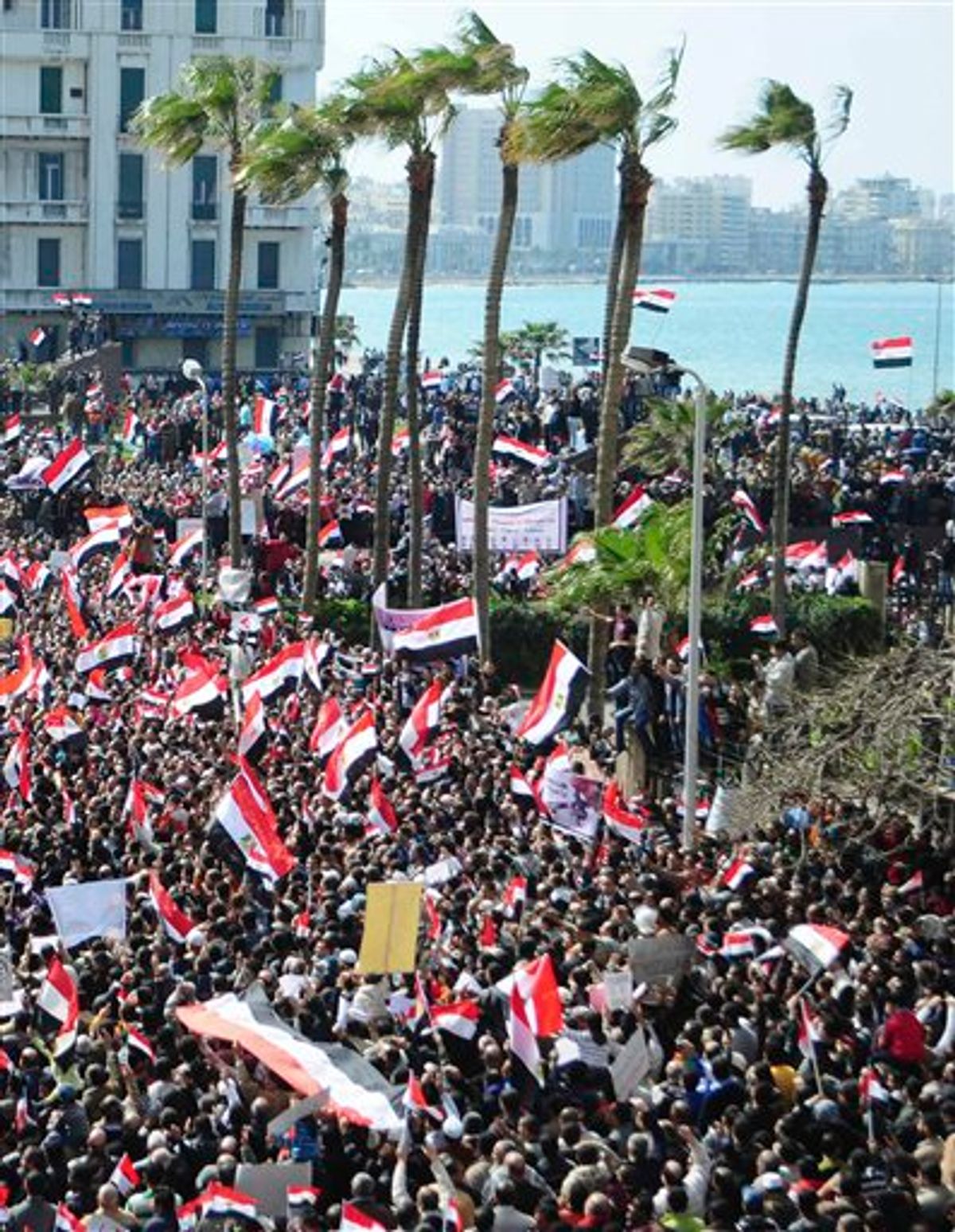 Thousands of Egyptian anti-government protesters march Alexandria, Egypt, Friday, Feb. 11, 2011. Egypt's military threw its weight Friday behind President Hosni Mubarak's plan to stay in office through September elections while protesters fanned out to the presidential palace in Cairo and other key symbols of the authoritarian regime in a new push to force the leader to step down immediately. The statement by the Armed Forces Supreme Council - its second in two days - was a blow to many protesters who had called on the military to take action to push out Mubarak after his latest refusal to step down. (AP Photo/ Tarek Fawzy) (AP)
--

Egypt exploded with joy, tears, and relief after pro-democracy protesters brought down President Hosni Mubarak with a momentous march on his palaces and state TV. Mubarak, who until the end seemed unable to grasp the depth of resentment over his three decades of authoritarian rule, finally resigned Friday and handed power to the military.

"The people ousted the regime," rang out chants from crowds of hundreds of thousands massed in Cairo's central Tahrir Square and outside Mubarak's main palace several miles away in a northern district of the capital.

The crowds in Cairo, the Mediterranean city of Alexandria and other cities around the country burst into pandemonium. They danced, chanted "goodbye, goodbye," and raised their hands in prayer as fireworks and car horns sounded after Vice President Omar Suleiman made the announcement on national TV just after nightfall.

"Finally we are free," said Safwan Abou Stat, a 60-year-old in the crowd of protesters at the palace. "From now on anyone who is going to rule will know that these people are great."

The protests have already echoed around the Middle East, with several of the region's autocratic rulers making pre-emptive gestures of democratic reform to avert their own protest movements. The lesson many took: If it could happen in three weeks in Egypt, where Mubarak's lock on power had appeared unshakable, it could happen anywhere.

The United States at times seemed overwhelmed trying to keep up with the rapidly changing crisis, fumbling to juggle its advocacy of democracy and the right to protest, its loyalty to longtime ally Mubarak and its fears of Muslim fundamentalists gaining a foothold. Neighboring Israel watched with growing unease, worried that their 1979 peace treaty could be in danger. It quickly demanded on Friday that post-Mubarak Egypt continue to adhere to it.

Mubarak, a former air force commander came to power after the 1981 assassination of his predecessor Anwar Sadat by Islamic radicals. Throughout his rule, he showed a near obsession with stability, using rigged elections and a hated police force accused of widespread torture to ensure his control.

He resisted calls for reform even as public bitterness grew over corruption, deteriorating infrastructure and rampant poverty in a country where 40 percent live below or near the poverty line.

The protest movement that began on Jan. 25 grew from small groups of youth activists organizing on the Internet into a mass movement that tapped into the discontent to become the largest popular uprising in the Arab world.

Up to the last hours, Mubarak sought to cling to power, handing some of his authorities to Suleiman while keeping his title.

But an explosion of protests Friday rejecting the move appeared to have pushed the military into forcing him out completely. Hundreds of thousands marched throughout the day in cities across the country as soldiers stood by, besieging his palace in Cairo and Alexandria and the state TV building. A governor of a southern province was forced to flee to safety in the face of protests there.

His fall came 32 years to the day after the collapse of the shah's government in Iran.

Vice President Suleiman -- who appears to have lost his post as well in the military takeover -- appeared grim as he delivered the short announcement.

"In these grave circumstances that the country is passing through, President Hosni Mubarak has decided to leave his position as president of the republic," he said. "He has mandated the Armed Forces Supreme Council to run the state. God is our protector and succor."

Nobel Peace laureate Mohammed ElBaradei, whose young supporters were among the organizers of the protest movement, told The Associated Press, "This is the greatest day of my life."

"The country has been liberated after decades of repression," he said adding that he expects a "beautiful" transition of power.

Outside Mubarak's Oruba Palace in northern Cairo, women on balconies ululated with the joyous tongue-trilling used to mark weddings and births.

Mohammed el-Masry, weeping with joy, said he had spent the past two weeks in Tahrir before marching to the palace Friday. He was now headed back to the square to join his ecstatic colleagues. "We made it," he gasped.

The question now turned to how the military, long Egypt's most powerful institution and now its official ruler, will handle the transition in power. Earlier in the day, the Armed Forces Supreme Council -- the military's top body -- vowed to guide the country to greater democracy. State TV said a new statement by the military would be issued Friday evening.

Abdel-Rahman Samir, one of the youth organizers of the protests, said the protest movement would now open negotiations with the military over democratic reform but vowed protests would continue to ensure change is carried out.

"We still don't have any guarantees yet -- if we end the whole situation now the it's like we haven't done anything," he said. "So we need to keep sitting in Tahrir until we get all our demands."

But, he added, "I feel fantastic. .... I feel like we have worked so hard, we planted a seed for a year and a half and now we are now finally sowing the fruits."