The promise of real democracy in Egypt

Don't listen to the fear-mongers: This is a classic showdown between tyranny and freedom 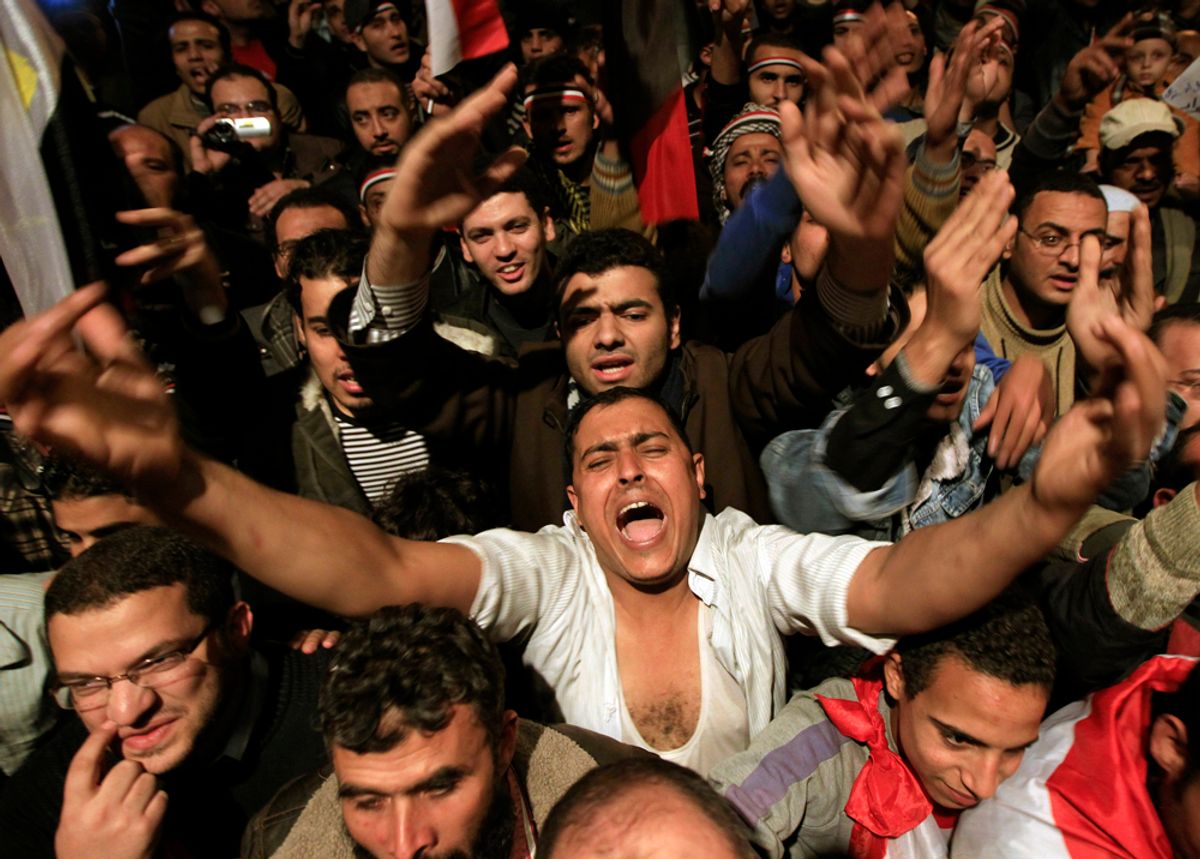 Opposition supporters shout in their stronghold of Tahrir Square, in Cairo February 10, 2011. President Hosni Mubarak provoked rage on Egypt's streets on Thursday when he said he would hand powers to his deputy but disappointed protesters who had been expecting him to step down altogether after two weeks of unrest. "Leave! Leave!" chanted thousands who had gathered in Cairo's Tahrir Square in anticipation that a televised speech would be the moment their demands for an end to Mubarak's 30 years of authoritarian, one-man rule were met. REUTERS/Goran Tomasevic (EGYPT - Tags: POLITICS CIVIL UNREST) (Â© Goran Tomasevic / Reuters)
--

As revolutionary events sweep Egypt, and Egyptian President Hosni Mubarak stubbornly insists yet again on staying at least into September, the United States is today dealing with the fallout of decades of unstinting support for an authoritarian Egyptian police state. The heavy American legacy is manifest in the American tanks parked in Tahrir Square and the made-in-the-USA tear gas canisters security forces fired at demonstrators. Egyptians know that the U.S. provides over $1.5 billion in aid, of which some $1.3 billion is military aid (all of which by law must be spent on American goods and services), yet significant amounts of U.S. assistance went into the pockets of the country’s rulers, and not to bettering the lot of Egyptians.

Dramatically, conventional opinion in Washington has begun to shift in the past two weeks. This is in part because of the increasingly intensive and accurate U.S. media coverage of the size and tenor of the huge demonstrations against Mubarak, the ferocity of police repression, and the unleashing of the regime’s brutal secret police thugs.

Many Americans have realized that the Egyptians simply want democracy and a better life, and that their regime was repressive and brutal. It is now easier for them to see Egyptians' struggle as part of a larger narrative that includes recent democratic revolutions in many parts of the world, a narrative that they understand as having roots in the American Revolution. Whatever the realpolitik arguments for sticking with the status quo in Egypt, this is a harder position to defend politically in the U.S. than it once was.

The rejection of the Mubarak regime should be less difficult after the violence it unleashed against its own people directly affected American and Western journalists, including reporters from CNN, NBC and the BBC. The beatings they were subjected to, and the fact that numerous unimpeachable observers identified the perpetrators as agents of the secret police or the ruling party, have revealed to many Americans the true nature of Mubarak and his henchmen. Nevertheless, in part at the instigation of other Arab rulers and of Israel and its ubiquitous American supporters, in recent days the Obama administration explicitly backed a transition led by Mubarak’s right-hand man, the head of Egypt’s intelligence agency, Lt. Gen. Omar Suleiman. In effect, the Obama administration was seeking to keep Mubarak in office as long as possible, and to keep his police state alive thereafter.

For all the recent talk about supporting Egyptian democracy, what is ultimately vital to American policymakers is Egypt’s geopolitical alignment with the United States and its acquiescence in Israel’s regional hegemony -- a policy Mubarak, and under him Suleiman, have long facilitated. These core interests could well be affected by a fully democratic Egypt that sought to play a role commensurate with its size and history in regional politics and that represented faithfully the wishes of its people (as the current democratic Turkish government does).

A democratic Egypt might challenge American support of Israel's Middle Eastern nuclear monopoly, refuse to collude in Israel's illegal and immoral siege of Gaza, actively back a genuine inter-Palestinian reconciliation, or otherwise assert its independence from American and Israeli policies. It might do so even while respecting the letter of the (highly unequal) peace treaty with Israel and existing accords with the U.S. Given the blinders worn by American policymakers, such an Egypt would be a policy headache in Washington on the level of that caused by all three major regional powers, Israel, Turkey and Iran.

This potential headache looms larger than it may prove to be because of the unceasing demonization of political Islam. This post-Cold War campaign was the joint effort of the Arab regimes allied to Washington, Israel and Washington lobbyists and politicians. The Arab dictators, with Mubarak in the lead, argued that the police states they created were the only barrier standing in the way of Islamic extremism, and that democracy would inevitably produce governments dominated by Islamic fundamentalists.

In order to make these dire predictions credible, they systematically pulverized the institutions of civil society, especially secular political alternatives and free trade unions, stifled free speech, and in effect forced many into contemplating violence as the only recourse against unremitting tyranny. Fortunately, the overwhelming majority of Egyptians and Arabs resisted this temptation. In the case of Egypt, the Muslim Brotherhood was painted in the direst colors by the regime and its backers in Washington and Israel, in spite of its evolution away from violence and its acceptance of parliamentary democracy. At the same time, the Brotherhood was always allowed a certain margin of maneuver by the Egyptian regime, in part to give credence to the idea that there was a lurking Islamic bogeyman that would pounce if repression were eased. This narrative was enthusiastically picked up and amplified in Israel, which benefited enormously from being able to pose as "the only democracy in the region" (ignoring Turkey, Lebanon and Kuwait, and the Palestinian attempt that ended when Israel and the U.S. rejected the 2006 election result).

The unimpeded participation of the Muslim Brotherhood and other groups in anticipated elections will be a crucial marker of change, but the most critical questions are whether there will be genuine regime change. This will require a dismantling of the police state and repeal of its hated Emergency Laws, constitutional revision and an enhanced role for Egypt’s highly respected judiciary, and an opening up of the political process that will permit the flourishing of a range of political parties and make possible a democratic transition.

Success depends mainly on three factors. These are the Egyptian masses' capability to endure further repression and the slanderous onslaught of the state-controlled media, the determination of the regime (with quiet support from the U.S.) to maintain the essential elements of its police state, and the willingness of the Egyptian army to acquiesce in further repression. The military establishment may be aware that intensified repression will ultimately further delegitimize an already deeply hated regime and tarnish its own thus-far-unspotted prestige in Egyptian society, thereby threatening its extensive privileges. One can only hope so: Such a disappointment of the newly raised hopes of many millions of Egyptians would be tragic but a setback today is likely only to delay a revolution well underway. Both enlightened self-interest and faithfulness to American ideals dictate that the United States not stand on the wrong side in this showdown between tyranny and freedom.