The Super Bowl of socialism

The game began with a Reagan tribute, but ended with victory for pro sports' only publicly owned nonprofit team 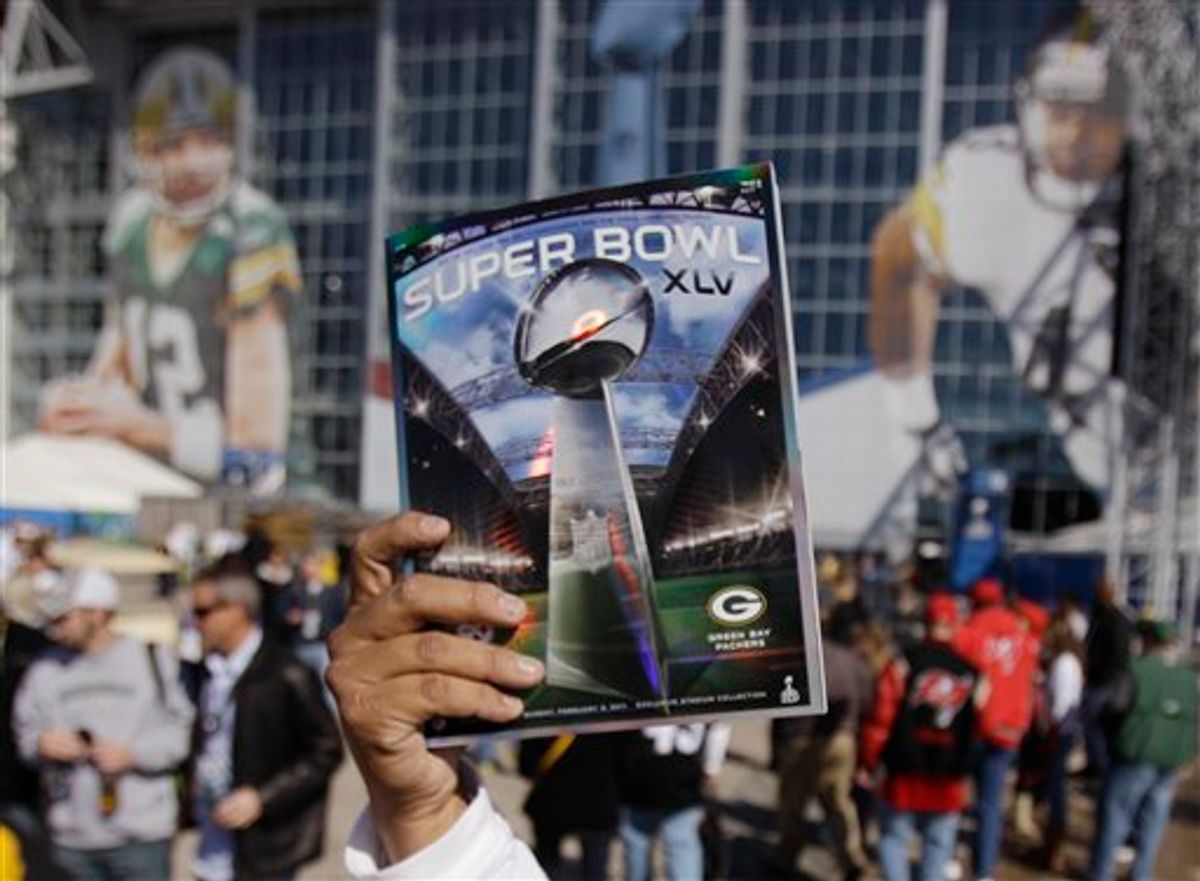 A program is sold outside Cowboy Stadium before the NFL football Super Bowl XLV game between the Green Bay Packers and the Pittsburgh Steelers Sunday, Feb. 6, 2011, in Arlington, Texas. (AP Photo/Matt Slocum) (AP)
--

The Super Bowl has become a true televisual non sequitur -- a bizarre "Rocky"-style montage mashing together as many divergent strands of American culture as possible.

This year's blockbuster was no exception. There was former President George W. Bush sitting next to coach John Madden, who was obsessively texting. There was actress Cameron Diaz feeding popcorn to baseball bad boy Alex Rodriguez. There was Christina Aguilera belting out a "Naked Gun"-worthy version of the national anthem. There was even a melding of hip-hop, hair metal and sci-fi, as the Black Eyed Peas joined Slash for a rendition of "Sweet Child o' Mine" -- all in front of neon “Tron” dancers.

This was a bewildering assault on the senses, to say the least -- and nothing was more singularly mind-blowing than the NFL using a Ronald Reagan eulogy to kick off a sports-themed tribute to socialism.

Reagan, of course, made his political name regularly invoking the "s" word to demonize government. For such bombast, he gained many followers, most of whom nonetheless cherished the doctrinaire socialism that undergirded their communities in the form of public infrastructure and services.

This Reagan-inspired paradox of cheering anti-socialist platitudes while supporting socialism in practice was the tale of Super Bowl XLV. The game began with a jubilant Reagan biopic that approvingly flaunted his red-baiting past, including his 1964 warning about America "tak(ing) the first step into a thousand years of darkness." The game ended with victory for professional sports' only publicly owned nonprofit organization, the Green Bay Packers -- a team whose quasi-socialist structure allows Wisconsin’s proletariat to own the means of football production.

Green Bay's win, though, doesn't tell the Super Bowl's entire socialist tale. The game was held in one of the NFL's government-funded stadiums. Additionally, training for many Super Bowl players was subsidized by taxpayers when those players honed their skills at public high schools and universities. Meanwhile, fans arrived at the event on public roads, the contest was broadcast on public airwaves, and the Navy spent $450,000 of public monies flying jets over the game in order to stage a momentary TV image.

Except for the Nation magazine's Dave Zirin, none of the major media examined any of this. The Super Bowl was presented as a seamless jaunt from Reagan hagiography to trophy ceremony with no mention of the socialist context. Why?

Some would argue that the sports commentariat was laser-focused on the game itself. Others might say that in trying to break the players’ union, NFL management intentionally trumpeted an anti-union president -- and the management-worshiping media avoided highlighting the Reagan celebration’s underlying hypocrisy in order to avoid humiliating the owners.

Both theories are likely rooted in truth, but there was something reflexive at work, too -- a deliberate self-censoring.

Yes, even though we clearly embrace socialism in everything from professional sports to telecommunications, the politicians and corporations who frame our public dialogue have long stifled honest discussions of our socialist reality because they know such discussions would show that America primarily champions a particular form of socialism -- a corporate socialism leveraging public resources for private profit.

Like the few municipal services that still remain in today’s era of Reaganomics, the publicly owned Green Bay Packers are a rare exception to this norm. That's why the story of the team's organizational structure is suppressed -- because it shows the most important question facing our nation isn't about accepting or rejecting socialism. We've already accepted it. Instead, the real question is about what specific type of socialism we want: the current kind that works only for those in the luxury box, or the kind that starts working for the rest of us?