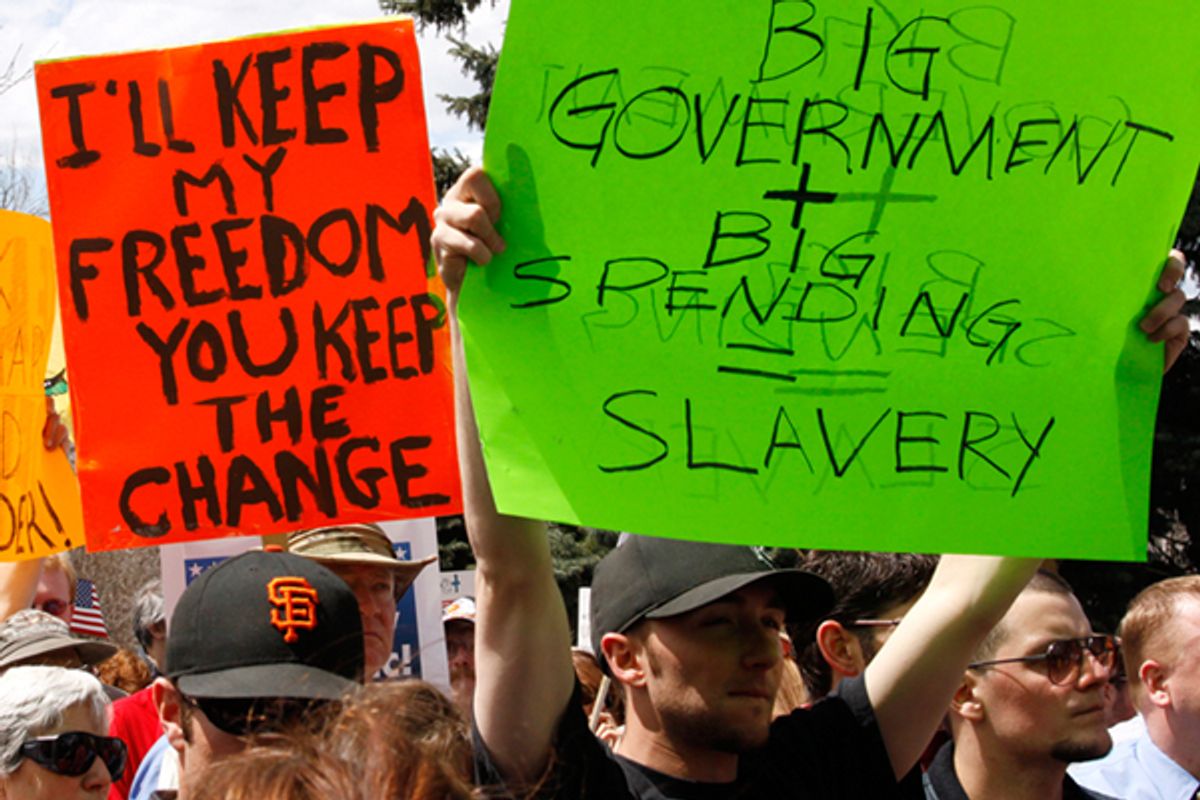 People wave signs at a Tea Party protest on the grounds of the Colorado state Capitol in Denver on April 15, 2009.
--

Tea Party House Republicans are puffing out their chests. On Thursday, reports the New York Times, House GOP leaders backed down before the wrath of the new freshman class of ultra-conservative Republican representatives and agreed to pursue deeper cuts in the federal budget than they had previously planned.

It's a clear victory for the Tea Party in the short term, but it could be a big setback in the war -- unless the explicit Republican plan is to box themselves in as wild-eyed radicals and make Obama look like a sensible moderate. Time is quickly running out before the March 4 expiration of the current continuing resolution that authorizes the government to keep spending. By demanding deeper cuts, Republicans are clearly increasing the likelihood that Senate Democrats and the White House dig in their heels. Who wins the political public relations game as a government shutdown gets closer and closer to reality is anyone's guess, but the latest polling seems to indicate that public support of big government spending cuts is much softer than the Tea Party thinks.

The initial Republican plan added up to between $35-44 billion dollars worth of cuts, depending on how you count. But to hear the Tea Partiers talk, they now won't settle for anything less than the full $100 billion in cuts that they promised while campaigning before last year's election.

This is not, strictly speaking, true. The proposed $100 billion worth of cuts is measured against Obama's budget request for fiscal year 2011 -- but that budget was never passed by Congress. The government has instead been operating since Oct 1 under a series of continuing resolutions, spending a little bit less than as specified in the budget request. Measured against actual spending levels, reports the Times, the cuts will add up to about $60 billion.

The number might seem small in the context of a $1.5 trillion deficit, but the cuts will still hurt plenty. The fiscal year will be half over by the time the proposed cuts kick in, and they only apply to a small portion of the overall budget. A select number of government programs will face deep cuts that must be implemented over a short period of time. There seems to be little evidence that Republicans have fully grasped what exactly their demands entail.

With many of the 93 freshmen members of the House still asking rudimentary budget questions such as: "what is the difference between an authorization and an appropriation?" or "how do outlays differ from budget authority?" the time frame that Rep. Rogers and his leadership are committed to means that not only will those voting on the proposal have little opportunity to understand it but the authors themselves will not have fully vetted or completely understood what they are proposing. There have been no hearings, no requests for testimony, and no opportunity even for staff charged with proposing the cuts to do agency-by-agency analysis of the possible negative consequences. Members will vote next week on the package without fundamental knowledge of how major budget changes in literally thousands of federal programs will impact the country in general or their own constituents in particular.

For Democrats, the Republican strategy could be a windfall. Without taking time to quantify what their cuts will mean in practical terms House Republicans intend to just charge ahead with their slashing and burning. Democrats will then be able to sit back and point out the likely consequences. The more the Tea Party demands, the harder it will become to make a deal.

And that's even without taking healthcare reform into consideration. Some House Republicans are demanding that the terms of any continuing resolution prohibit the federal government from any further spending implementing healthcare reform. That will surely be rejected by Senate Democrats.

Handicapping the future of this budget fight is something that would make the wiliest Las Vegas bookie wary, but it seems safe to say at this point that the more the Tea Party flexes its muscles, the less likely a budget deal becomes.