With 106 songs on the Billboard charts, platinum albums and a sold out world tour, "Glee" is a force 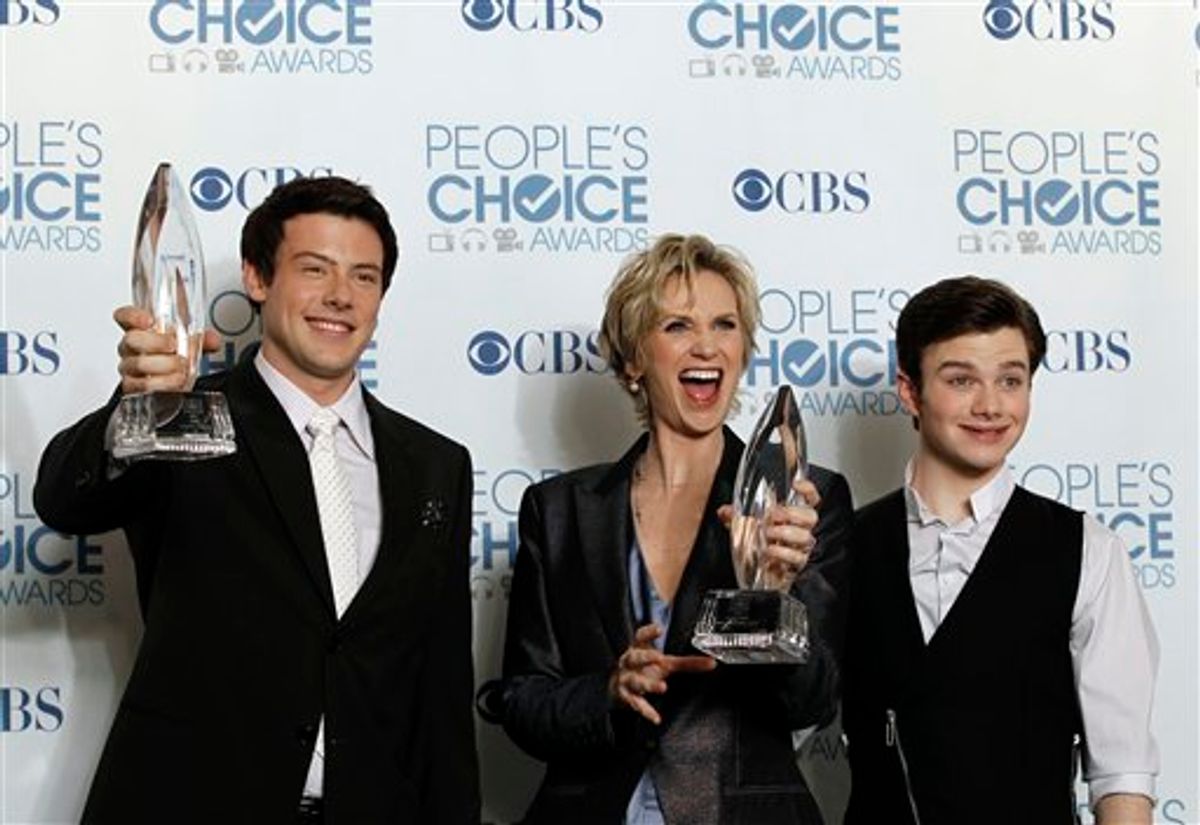 From left, Cory Monteith, Jane Lynch, and Chris Colfer pose for a photo backstage with the award for favorite TV comedy for "Glee" at the People's Choice Awards on Wednesday, Jan. 5, 2011, in Los Angeles. (AP Photo/Matt Sayles) (AP)
--

Yes, 106 songs from the "Glee" cast have landed on the Billboard Hot 100 chart. And yes, the cast's five albums have reached platinum or gold status. And yes, the stars of the show performed on a sold-out tour.

And yes, they can actually sing.

But could the "Glee" cast win a Grammy? Well, maybe so.

At Sunday's award show, the cast of "Glee" will compete for two awards. The first isn't a surprise: Their first album, "Glee: The Music, Volume 1," is up for best compilation soundtrack album for motion picture, television or other visual media. The competition includes TV series "True Blood" and "Treme," and films "The Twilight Saga: Eclipse" and "Crazy Heart."

The cast's second nomination, though, is where the real contest is. They're up for best pop performance by a duo or group with vocals for their rendition of Journey's "Don't Stop Believin.'" The song peaked at No. 4 on the Hot 100 chart and is the cast's best-seller and highest-charter.

"Don't Stop Believin'" will battle it out with hits from Maroon 5, Paramore, Sade and Train, who's up for a live version of the smash "Hey, Soul Sister."

The nomination for the cast of "Glee" brings up the question: Is this a real band or musical group outside of its hit TV show, which recently picked up three Golden Globes.

"It's weird because I feel like we're not necessarily a singing group," said Amber Riley, who stars as diva-like glee club member Mercedes Jones. "We just do it for television, so to be recognized as a group ... it's just is really weird. I guess we weren't really expecting it being on a TV show."

Even Recording Academy CEO and President Neil Portnow thought the nod in the pop group category was an "unique" one.

"Some of the categories where they wound up are interesting because they do face off with other groups that really are established strictly as musical groups and don't have the other components of a television show or something of that nature," Portnow said. "They are a group that works together, performs together, did these recordings together as an ensemble and have done some touring and continues to do live performance, (so) it is a component of what they do. I think what's interesting is it's not solely what they do."

Two of the songs the cast will compete with are ones they've covered.

"It's really weird because these are people who have actually helped the show," 24-year-old Riley said of the Train tune and Paramore's "The Only Exception."

"Just the way the show and popular music are dovetailing really speaks volumes for the Grammys and for the way that the show is bringing songs into people's lives," Brunman added.

"People don't just watch the show and hear the songs and go, 'That's it.' They live with the music, they buy the records, they listen to it in the car," he said. "It's legitimate to people. It's the real thing."

"It's weird because it's a cast of a show, so it's not like your typical artists in the truest since. But it is too. It's a new world," Anders said.

Outside of the Grammy nods, the question of the "Glee" cast being an actual musical group is solidified by a recent nomination at the Feb. 15 BRITS awards. They're up for international breakthrough act, alongside Justin Bieber and Bruno Mars.

Even Riley seems to be convinced: "We put out albums. We see if they sell. We go out on tour just like everybody else does. So I guess we are a singing group."

Fox is a unit of News Corp.