Most Americans regard protest leader (and Google employee) Wael Ghonim as a hero. Multinational executives demur 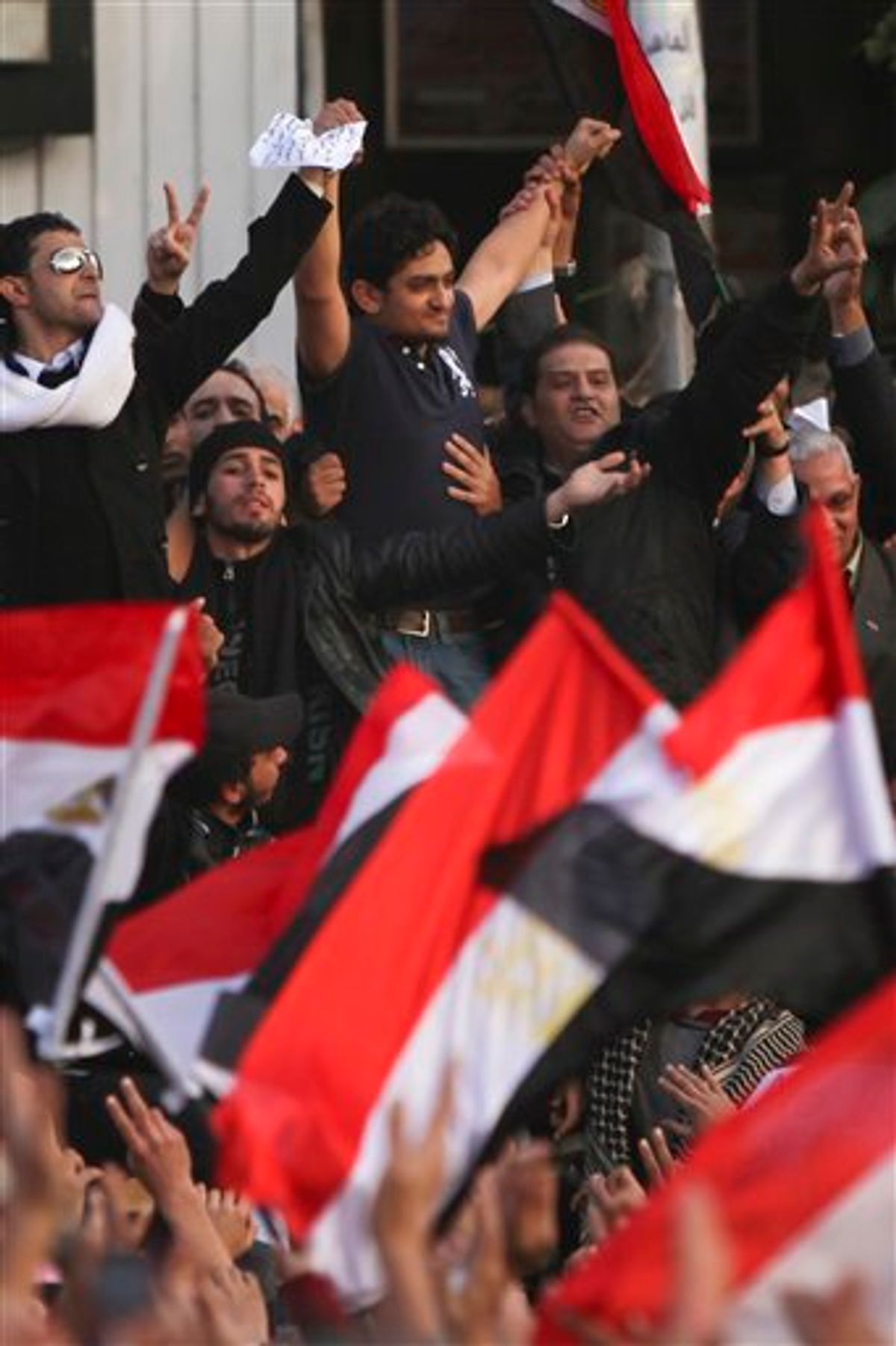 Egyptian Wael Ghonim, center, a 30-year-old Google Inc. marketing manager who was a key organizer of the online campaign that sparked the first protest on Jan. 25, gestures to the crowd in Tahrir Square, in Cairo, Egypt, Tuesday, Feb. 8, 2011. A young leader of Egypt's anti-government protesters, newly released from detention, joined a massive crowd of hundreds of thousands in Cairo's Tahrir Square for the first time Tuesday, greeted by cheers, whistling and thunderous applause when he declared: "We will not abandon our demand and that is the departure of the regime." (AP Photo/Tara Todras-Whitehill) (AP)
--

In "How to Handle Employee Activism: Google Tiptoes Around Cairo's Hero," the Wall Street Journal has stumbled upon the silliest possible angle on the Egyptian protest saga -- the threat to a multinational company's brand that might accrue when employees get involved in politics.

As the world marveled this week at the remarkable story of Wael Ghonim, the Google manager who helped organize a popular rebellion in Egypt, a great sigh of relief could be heard rising from much of the rest of American business:

Wall Street Journal reporter John Bussey ends up quoting only one unnamed executive to support his rather dramatic generalization, but that doesn't mean it isn't true, even if despicable. You might think that a charismatic young man willing to die for his country in pursuit of liberty and freedom for his people would resonate with the very core of American values, but the most important insight offered by Bussey, although perhaps unintentionally, is that American corporations do not share American values.

A lot of U.S. companies, which now manage millions of employees abroad, watched with trepidation. Many of them now earn more abroad than they do in America. And much of that income comes from the sale of big-ticket items -- power systems, infrastructure equipment, aircraft, telecommunications --that only governments can afford to buy....

Reflecting on Mr. Ghonim's extracurricular activities, an executive at one big U.S. manufacturer operating abroad was adamant: "Anything that affects the brand -- we hate that," he said. "It wouldn't be allowed."

I hope the Tea Party is paying attention. There is a strain in conservative political thought that appears to think that the freedom of American corporations to do as they please, unconstrained by regulation or taxes or anything else that might be "burdensome" is an inalienable right just as important as the right to free speech, or assemble, or bear arms. When in fact, the truth is the opposite. Freedom for American multinational corporations means the freedom to suck up to dictators so as to make a big hardware sale, or exploit cheap labor and lax environmental laws at the expense of American workers. And if your employees in a foreign country actually dare to act like American icons, well, "it wouldn't be allowed."

In the Mideast, I'm guessing that Google's "brand," right now, is doing quite a bit better than America's. There's a reason for that.