Today in pictures of countries being reborn: Egypt

A prehistoric nation prepares for a postmodern rebirth 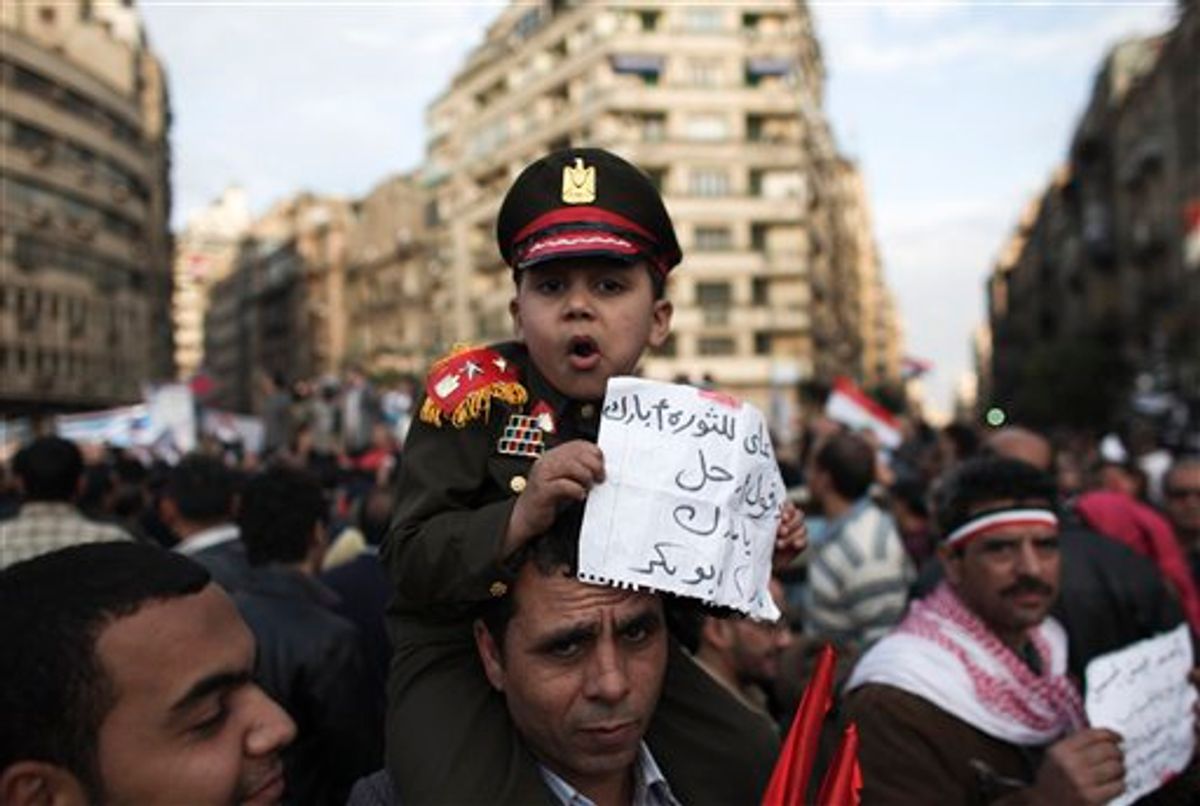 An Egyptian boy dressed as an army colonel sits on his father's shoulders in Tahrir Square in Cairo, Egypt, Thursday, Feb. 10, 2011. President Mubarak refused to step down or leave the country and instead handed his powers to his vice president Thursday, remaining president and ensuring regime control over the reform process, which stunned protesters demanding his ouster, who waved their shoes in contempt and shouted, "Leave, leave, leave." The arabic on the paper reads "I came to give my blessings to the revolution and tell Mubarak to go". (AP Photo/Tara Todras-Whitehill) (AP)
--

Egypt emerged from 18 days of turmoil today with a new(ish) leader in power and a hopeful eye towards the future. Led by the youth and watched by the world, the Egyptian protests became the second revolution to shake the Middle East so far this year. Here are some snapshots of the reaction after President Hosni Mubarak announced his resignation -- a moment for history to comprehend. An anti-government protester chant slogans during the continuing demonstration in Tahrir Square, in downtown Cairo, Egypt, Friday, February 11, 2011 -- a date to be remembered. (AP Photo/Khalil Hamra) "Ecstatic" seems too mild a word to use when describing the crowd after Mubarak's resignation. (Guardian) The crowd during the final day or protests looked nothing less than patriotic. (AP Photo/Tara Todras-Whitehill) Protesters stand on burned cars to celebrate in Tahrir Square in Cairo following the announcement of the resignation of Egyptian President Mukarak. (AP/Emilio Morenatti) An Egyptian woman cries as she celebrates the news of the resignation in Tahrir Square. (AP/Tara Todras-Whitehill) An Egyptian boy dressed as an army colonel sits on his father's shoulders in Tahrir Square not long before Mubarak's resignation. The arabic on the paper reads "I came to give my blessings to the revolution and tell Mubarak to go". (AP Photo/Tara Todras-Whitehill) President Barack Obama speaks about Egypt and the resignation of President Hosni Mubarak in the Grand Foyer of the White House in Washington on Friday afternoon. (AP Photo/Charles Dharapak)