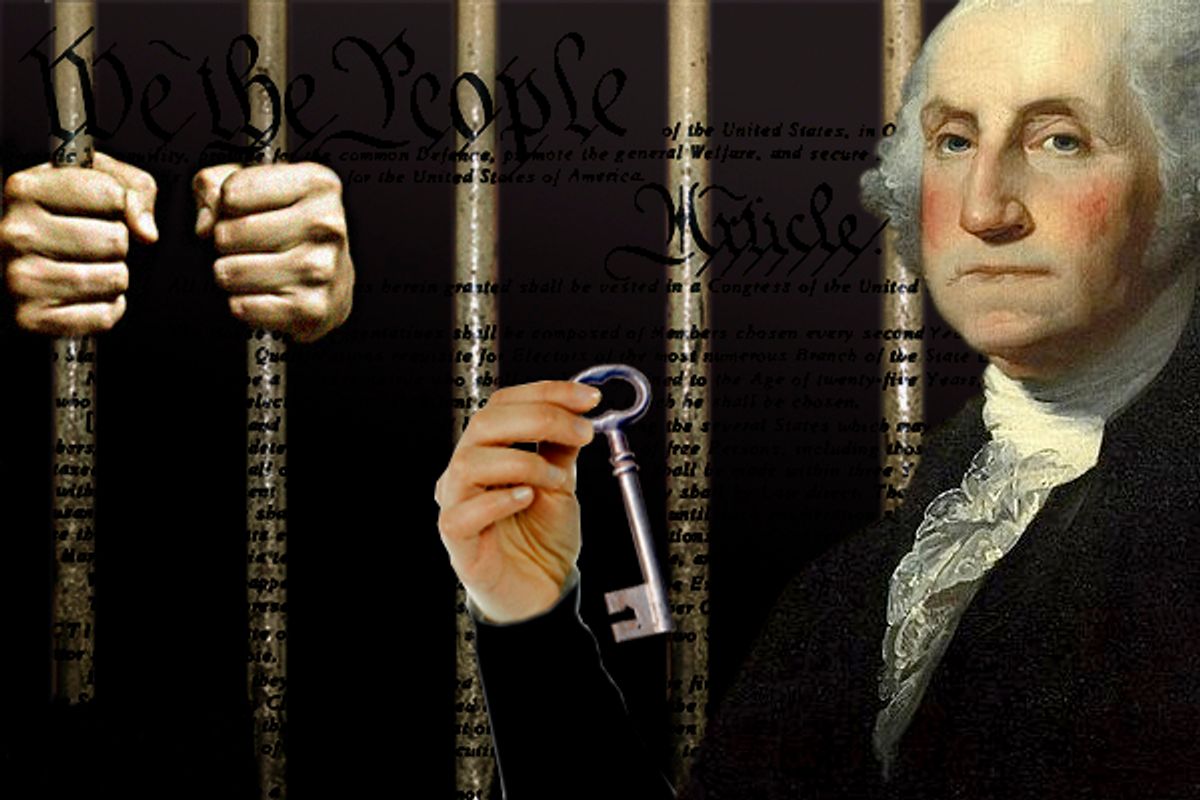 With reverence and awe, Michele Bachmann and the Tea Party pay homage to the original Constitution and framers who drafted the document in 1787. The House of Representatives, in a nod to them, began its session this year by reading it. Bachmann even brought Antonin Scalia to a seminar on the Constitution for members of Congress, where the Supreme Court justice instructed members to read the Federalist Papers and follow the framers' original intent. Moreover, many of the Tea Party's political positions, such as opposition to President Obama's healthcare reform program, are rooted in their adherence to the original document.

But what if they actually got their way? If a Tea Party constitutional reading suddenly took sway and we returned to the original document as conceived, what would the American republic look like? Much to the surprise of Bachmann and others, there wouldn't be that much freedom and democracy.

To begin with, the original document was silent on the right to vote. Voting rights were largely a matter of state law, and in 1787 most states limited the franchise to white, male, Protestant property owners, age 21 or older. The original Constitution did not allow for direct popular voting for president or the United States Senate, and there was no clear language even allowing for voting for members of the House of Representatives. It took the 17th Amendment, adopted in 1913, to allow for people to vote for their senators (an amendment many Tea Party activists wish to repeal), and the Supreme Court, in two landmark cases in the 20th century, found that the right to vote for House members and in state and local elections was located in Article I, Section 2 of the Constitution and in the First Amendment.

Today there is still no right to vote directly for president, and it's only by the whim of state legislatures that there is a popular vote for that office. Had an original or plain reading of the Constitution been employed along the lines they advocate, many Tea Party activists would not have been able to vote last November. Finally, the original Constitution was silent on the right of women to vote, and states did deny them the franchise. It wasn't until 1920, with the adoption of the 19th Amendment, that women were given the right to vote. Without this amendment, there is no guarantee that Michele Bachmann would ever have been allowed to vote, let alone run for office.

The original Constitution didn't include a Bill of Rights. Alexander Hamilton, one of the framers and authors of the Federalist Papers, argued against it. The Bill of Rights protects many rights the Tea Party considers hallowed, such as the freedom of speech and assembly and a right to bear arms. Lacking a Bill of Rights, these freedoms wouldn't be protected against limitation by the national government. Moreover, the Tenth Amendment, which declares that "powers not delegated to the United States by the Constitution â€¦ are reserved to the states," would not be the law of the land; thus, there would potentially be no limits on what the national government could do.

But even if we consider the Bill of Rights, which was adopted in 1791, to be part of the original Constitution, there are still many limits on its use. Most importantly, as written, the Bill of Rights limited only national power -- not state power. Notice how the First Amendment begins by declaring, "Congress shall make no law â€¦ " The most important provisions of the Bill of Rights, as Justice John Marshall stated in the 1833 case Barron v. Baltimore, weren't meant to be a limit on state power. In that case, the Court ruled that a state could take an owner's property through eminent domain without compensating him.

Subscribe to an original intent reading of the Constitution and states are free to disregard individual rights, including free speech, property, religion and others. States did just that in the early years of the Republic and into the 20th century before the Supreme Court used the 14th Amendment to apply Bill of Rights provisions to the states. Most recently, the Supreme Court (with Scalia supporting it) used this incorporation tactic to apply the Second Amendment right to bear arms to states. A Tea Party constitutionalist could not have done this. So much for states as protectors of individual freedom.

And then there's the matter of slavery. Article I, Section 1 of the original Constitution permitted slavery and the slave trade. It referred to "free persons" and those "bound to service." For the purposes of census, apportionment and taxation, Indians and other persons would only be counted as three-fifths of whites. Slavery did not end until the Emancipation Proclamation by Abraham Lincoln in 1863 and the adoption of the 13th Amendment in 1865. The original Constitution lacked an equal protection clause, which bans discrimination. It took the 14th Amendment in 1868 and a Supreme Court decision to create it. Lacking this clause, states were free to discriminate, and they regularly did via segregation laws.

But nowhere in the original Constitution does it say that the federal courts have the power of judicial review. Alexander Hamilton in the Federalist Papers suggests that the federal court has this power, but it wasn't until 1803 that the Supreme Court actually ruled that this power existed. Hence, a contradiction: Hamilton, a constitutional framer and author of the beloved Federalist Papers, asserts that a power that is not explicitly written in the Constitution exists and a court rules in his favor -- and then, all these years later, Tea Party constitutionalists use that power to invalidate a federal healthcare law on the basis that it violates the Constitution!

Tea Party members say healthcare should be done at the state level. If so, states like Massachusetts have far more authority to mandate individual coverage than does the federal government. The main issue regarding "ObamaCare's" constitutionality is whether the Commerce Clause -- Article I, section 8, clause 3 -- gives Congress the power to mandate that individuals purchase insurance. The Supreme Court will ultimately rule on this. But there is no question that states using what is called their police power authority -- the ability to legislate for the health, safety and welfare of their people -- could adopt an individual mandate.

And let's not forget Alexander Hamilton, who argued against the need for a bill of rights and in favor of judicial review. The famous "Report on Manufactures" and "Report on Public Credit" he prepared as George Washington's treasury secretary argued for an expansive federal government role in assisting the economy -- hardly something the Tea Party constitutionalist would endorse.

It should be clear that many of the liberties and rights today's Tea Partiers demand and benefit from just didn't exist in the original form of the Constitution. It took many amendments and clarification from the courts to secure them. On top of that, if the ideal the Tea Party espouses ever was realized, it would just mean the states would have more authority to suppress rights.