The strength I get from other people's marriages

I've been seeking spiritual connection for years. I found it as a minister, helping couples launch their lives 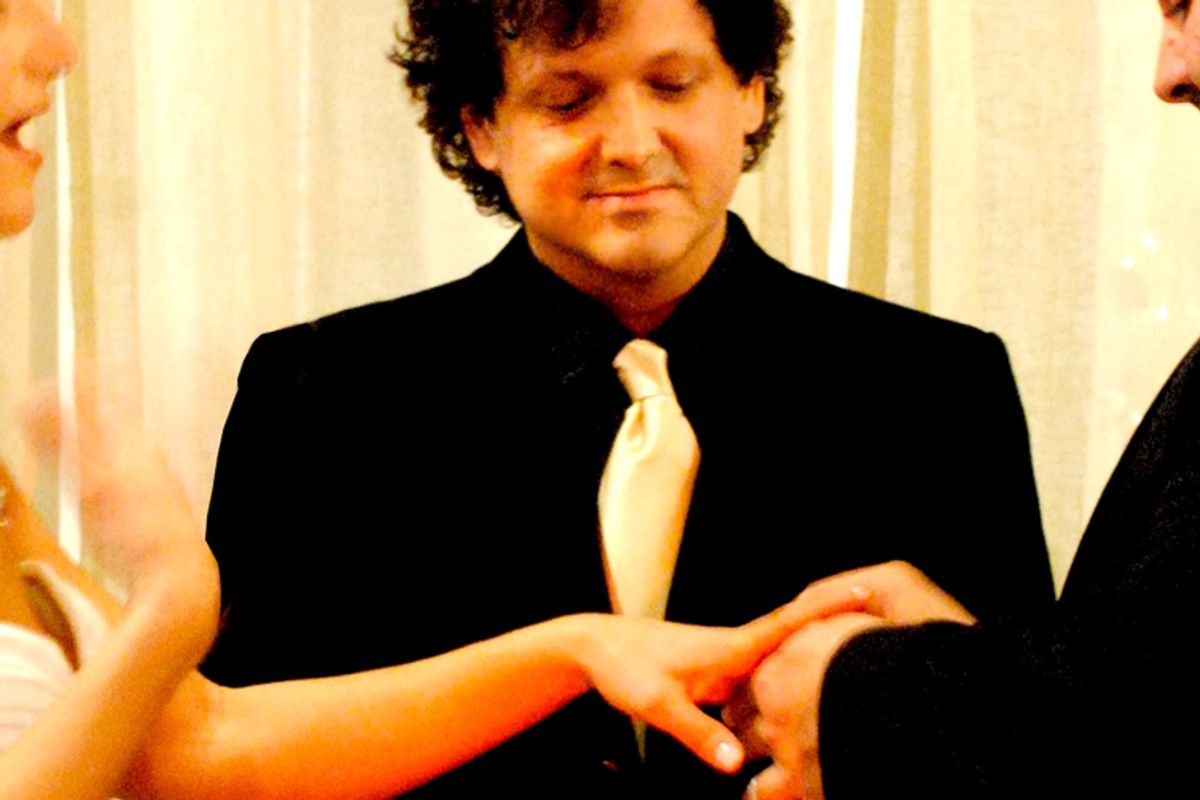 My curly hair tends to poof like a chia pet when it's humid, and when I walked into the wedding party in a Chelsea venue on a sweltering summer Saturday, a drunk guy elbowed the groom at the bar and yelled, "Hey, it's Kramer!"

"Dude, that's the minister," hissed the groom, and the drunk lost the color in his face. This was fun. It was my first time officiating a wedding, soon after receiving the license the city of New York had mailed me after being ordained, and I was as nervous as I'd been at 16 when I sang Aerosmith's "Make It" in front of a high school auditorium full of seniors. My hands shook. But it was a good shake, an excited shake.

Soon 200 eyes stared at me on the roof, standing in between the groom, Eric, and the bride, Regina. They read their vows, I asked them the key question -- "Do you take this man/woman" -- and pronounced them husband and wife. I signed the marriage license in the presence of witnesses, shook hands all around and was home 30 minutes later.

I've performed 16 weddings since then, referred by friends or strangers who've answered the occasional Craigslist ads I've posted. No two weddings are alike, and the excitement of being a critical component in somebody's special day never gets old. On one level, marrying people is a fantastic window into people's relationships and feelings about spirituality and God. On another level, it isn't so far from the business of painting apartments, once my full-time occupation. Someone needs a job done, they ask around, find someone who seems normal and won't screw up.

This whole thing began when I woke up one morning, rolled over and told my wife J.J. that I wanted to become an interfaith minister. J.J. went to Ohio Christian schools straight to the end of 12th grade, so I've always trusted her opinion on spiritual matters.

"You have to go to school," she said.

I looked into different interfaith seminaries close to our then-Brooklyn home, but they all seemed too tame. And I didn't want some bogus Internet certificate; I wanted an interactive, 130-mph high-octane experience. I have always been drawn to powerful men and women, those who declare, "This is what I believe" and are willing to take the heat, right or wrong. Men like Gene Hackman's Reverend Scott from 1972's "The Poseidon Adventure," who said "let God know that you have the guts and the will to do it alone. Resolve to fight for yourselves, and for others, for those you love. And that part of God within you will be fighting with you all the way." By becoming ordained, I felt I was crossing a line, moving from the casual seeker to a man who burned with purpose and passion.

I'd been a seeker for some time. My parents were agnostic. My father's stock answer to any mention of spirituality was, "Where was God during the Holocaust?" My mother taught Sunday school as a teen, but had discovered therapy and science and referred to herself a "lapsed Episcopalian." But me? I'd been hooked since age 5, when a neighbor gave me a Bible in the form of a cartoon pamphlet and I read it over and over, intrigued by the stories of passion, betrayal, blood, punishment and salvation. By the time I was 10, I had developed a passion for the works of Edith Hamilton, who wrote about Greek, Roman and Norse Gods. At age 27, I spent five months meditating in an Indian ashram, including two weeks in silence, part of a lifelong quest to discover life's meaning.

So it seemed a logical progression when I found a church in Maryland that agreed to ordain me. Excited, I embarked on a fast, which began as a single-day break from food but turned into five days of nothing but water. The day after I was done, I bit into the most orgasmic stalk of fresh celery I'd ever tasted in my life. This was what I wanted -- to feel appreciative, moment to moment, of food, people, life, myself, the clouds and the sky, and to disregard the mind-junk of how much money I was or wasn't making, what that person said to me that I didn't like and trying to figure out why there was world injustice and suffering and Chinese menus left under my door despite the signs reading "No menus." I was getting there.

I also wanted to marry people. I thought it would be interesting, and daring, and it is. If people have the guts and nerve to ask another to share their life with them -- to go through all the drama, joy, misunderstandings, family input and cash that most wedding plans involve -- then I'll stand up there, speak in a loud, clear voice and help them birth a life together. Will some of them get divorced? Maybe. What people do with their marriages after I'm finished with them is their business. A friend died two weeks ago at 29 after flipping his car in one of the snowstorms we've had in New York this winter. He had no guarantee of a long life, and neither does a marriage. I've made it 10 years this October in my own marriage, and I see J.J. has given me a grounding, a stability. Marriage can be a blissful merging of souls, or it can be hell. I believe it's up to the individuals.

So I took my new certificate to city hall in Manhattan, where they had me sign my name in dog-eared, coffee table-sized bound book and issued me, after a small fee, a license to perform weddings, good in the 50 states of America. I framed it, hung it on my wall, put up my ad and was soon contacted by Eric and Regina. Regina lived close by and was arranging the wedding, so we met at a Starbucks.

"To tell you the truth, I don't know what to ask you," she said.

"Ask yourself if you want my face in your wedding photos 20 years from now," I said. It was good enough for Regina, and I was hired.

It took another two years for my ministry to really get going. Last weekend, I married Megan and Jake, both 20, in Las Vegas, and I recently began taking concert pedal harp lessons, hoping to get good enough to play "The Bridal March" at a New Jersey wedding I'm officiating this summer on a beach. If not, I already know it on the guitar.

Like the bride and groom, I'm never completely relaxed when I first get to a wedding. I've learned it's best to walk around just like a guest, talking to people and breaking the ice. Sometimes the ice is thick, though. Last New Year's Eve, I rolled up to a suburban New York house and walked into a wedding party straight out of central casting for "The Sopranos." The men looked as though they could snap me in half and the ladies wore more paint than the living room walls, which were decorated with 15 moose, deer and elk heads. I heard the same greeting again and again as new guests arrived: "How yousedoin'?"

I wandered awkwardly around the party, gripping a glass of club soda and smiling at strangers who looked right past me, one after the other. I wanted to duck under the grand piano, where I saw a cat was already hiding herself, and at one point I slipped into a bathroom and hid for 10 minutes, getting centered, wetting my mouth, throwing punches into the air and getting psyched to do the ceremony.

The pretty, sweet young bride and affable groom arrived, and I relaxed. We hugged and soon took our places in the living room, and everybody hushed. This is always the good part. I get to look the bride and groom in the eye, connect with their hearts -- and all the world disappears as I walk them through one of the most emotional, intimate moments of their lives. It makes all the nervousness worth it.

In the meantime, the title "reverend" has become an emotional anchor in the face of life's inevitable turmoil. Often I say to myself, when I feel I'm being petty or hateful, "You're a reverend. Act like one."