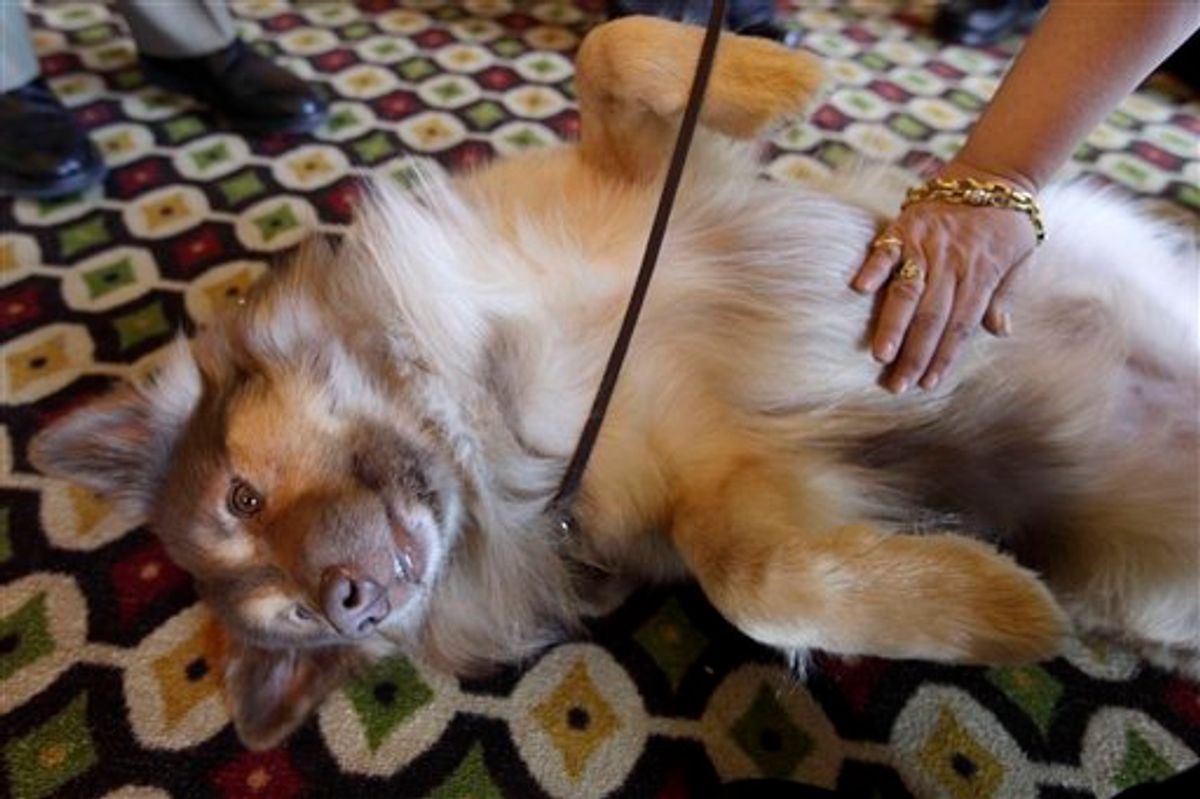 Kaffi looked as if he needed a coffee break. Rolling on his back, paws in the air, eyes getting heavy, he was dog tired.

"It's been a long day," owner JoAnn Secondino said a few days ago after arriving in town.

And the Westminster Kennel Club show hadn't even begun for this Icelandic sheepdog, one of six new breeds this year at America's top pooch pageant.

Lola got off to a good start Monday. The 15-inch beagle, officially named Ch. Torquay Midnight Confession, was a repeat winner in her breed.

Nearly 2,600 dogs are competing, and they all carry the abbreviation "Ch." before their names -- it stands for champion, since every dog at Madison Square Garden has already been a winner somewhere.

This year's entries come in 179 breeds and varieties. They're from 49 states -- North Dakota is absent -- and from several countries, including Thailand, Brazil, Slovenia and Australia.

The winners in the hound, toy, nonsporting and herding groups were being picked on Valentine's Day. The top sporting, working and terriers will be chosen Tuesday, and judge Paolo Dondina of Italy will point to the best in show that night shortly before 11 p.m.

This will mark the first time at the Garden for Icelandic sheepdogs, redbone coonhounds, Leonbergers, Boykin spaniels, cane corsos and bluetick coonhounds.

"We feel like debutantes at a coming-out party," said Secondino, of Union Bridge, Md.

There are three requirements for a breed to get recognized by the American Kennel Club, making it eligible for Westminster: a parent club that establishes a breed standard, a sufficient population of the breed, and solid distribution of the dog.

Meaning, as popular Westminster television host David Frei says, "they can't all be in one person's backyard."

Already, three more new breeds have been accepted for the 2012 show: the xoloitzcuintli (shoh-loh-eets-KWEEN'-tlee), the Norwegian lundehund and the entlebucher.

What the 15,000 or more fans each night at the Garden, and the millions watching on the USA Network or CNBC, won't see is a puggle or Labradoodle. Those hybrids, also known as "designer" dogs, are probably years away from making the AKC cut. Not impossible, just not anytime soon.

As always, terriers are a good bet to win the silver bowl and succeed reigning champion Sadie the Scottie. Las Vegas oddsmaker John Avello posts a line -- it's playful, with no real wagering -- and he lists a smooth fox terrier as the favorite at 6-1, followed by a Pekingese at 7-1, a boxer at 8-1 and an Irish setter at 10-1.

Also likely to be a crowd favorite is a monkey-faced affenpinscher named Banana Joe. Not entered, however, is the Australian shepherd called Reckon that won the recent AKC/Eukanuba show.

Rhodesian ridgebacks lead this year's Garden parade with 56 entries. There's just one Neapolitan mastiff, making for a sure winner in the best of breed competition.

Frei will be joined by versatile broadcaster Mary Carillo on the telecasts. Viewers can send in questions by Twitter, and the announcers will answer them if time permits.

Certainly the Westminster newcomers -- the handlers, that is -- will have questions.

Susan Lloyd of Beaufort, N.C., was wondering how it would feel to walk into the show ring with her bluetick coonhound named Mike.

Just then, she picked up a tip: Spray some soda on your shoes and the paws of your dogs, that will make them a bit sticky and help on the sometimes slick green carpet of the Garden.