Who's really guilty of a power grab? 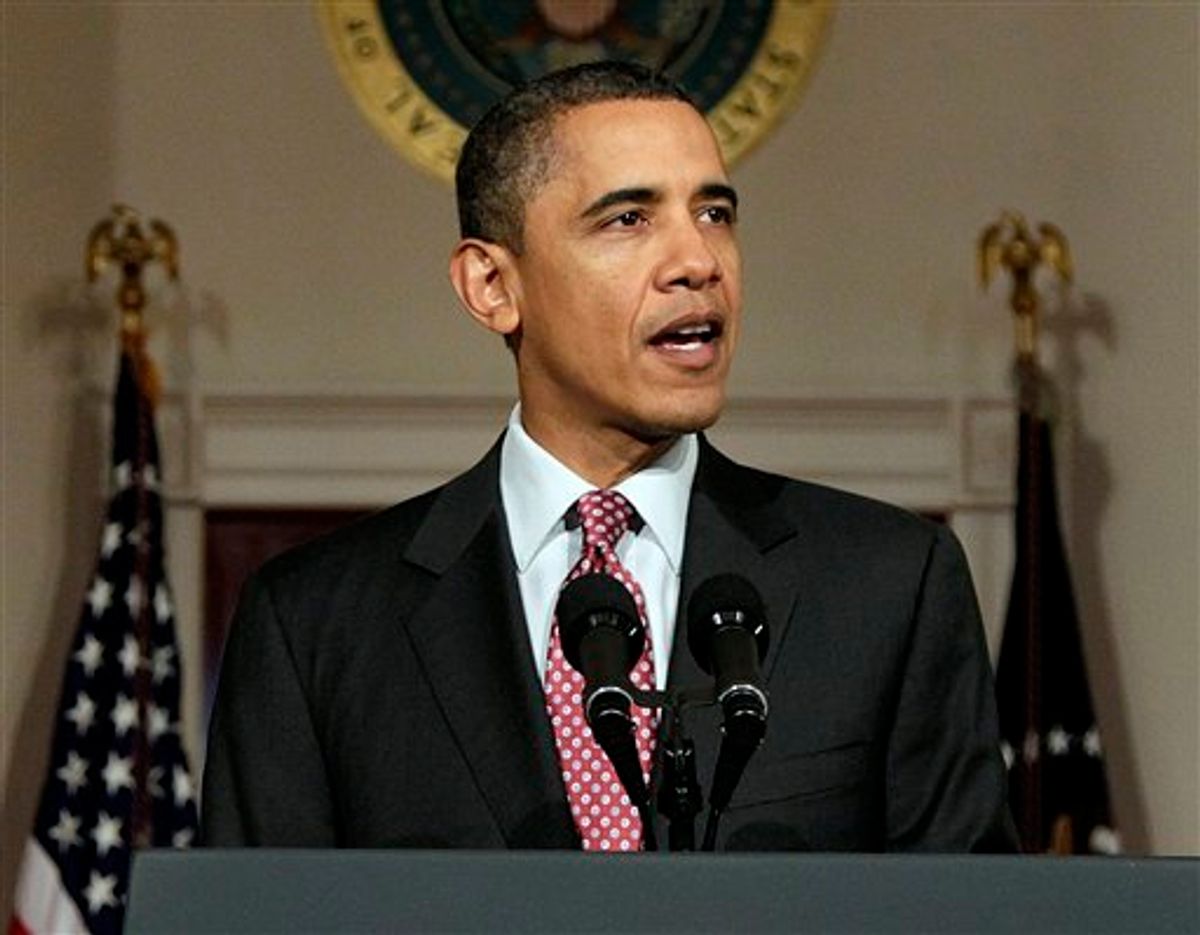 President Barack Obama makes a statement on the resignation of Egypt's President Hosni Mubarak in the Grand Foyer at the White House in Washington, Friday, Feb. 11, 2011. (AP Photo/Carolyn Kaster) (AP)
--

If you’ve been paying any attention at all to American politics over the past couple of years, it will come as no surprise to hear that the right is denouncing the EPA’s plan to regulate greenhouse gas emissions as a White House "power grab." According to the right’s narrative, it’s part of Barack Obama’s diabolical scheme to wrest control of the country from the representatives elected by the American people and turn our nation into a sluggish socialist has-been run by faceless bureaucrats.

Lucky for us, the GOP is on the case: Republicans have introduced the "Energy Tax Prevention Act of 2011" in order to "reassert the authority of Congress to levy taxes on the American people and direct public policy -- powers that are being usurped by the unelected bureaucrats at the Environmental Protection Agency."  But paradoxically, it’s the GOP that’s grabbing for power: Republicans are demanding that authority be returned to Congress not out of pure-hearted love of democracy or concern for The Will of the American People but because Congress is the arena where shameless use of the filibuster gives them ultimate control.

It’s a strategy that combines the GOP’s two favorite tactics: obstructionism and Tea Party-baiting. First, Republicans do everything they can to block bills on … well, on anything, really. Then, when the administration tries to actually address deep and systemic problems through other legal, constitutional, Supreme Court-approved approaches, Republicans cry “power grab!” in an attempt to move things back to Congress, where they can return to their preferred approach to governing: Using procedural quirks to shut down the legislative process altogether.

Thus, everything from the compensation fund for BP oil spill victims to the census has been designated a power grab by the right, while net neutrality legislation, healthcare reform and, really, anything requiring any sort of regulation or administration has been denounced as a transfer of power to "unelected bureaucrats." (Curiously, the military never comes up in these discussions.)

Of course, there are compelling arguments to be made against delegating too much authority to bureaucrats, and the Obama administration does have tendencies towards technocracy. Plus, the administration has done some truly troubling things, like proposing to let the FBI collect Americans’ internet records without court approval. But you don’t hear Republicans up in arms about that. No, it’s only efforts to prevent a devastating environmental collapse or to give more people access to affordable healthcare that trigger the Big Government alarms. Indeed, Republican rhetoric about limiting power cleverly conflates Big Government with the executive branch, implying that limiting the power of the executive branch will necessarily a) limit the power of government overall; and b) increase the power of the people. But neither is necessarily the case.

Limiting the power of the executive branch simply gives greater power to the other branches: after stripping all power from the executive branch, Congress could still vote to double taxes and mandate that all citizens keep a portrait of President Obama in their living rooms -- though the (unelected) Supreme Court would probably declare the latter unconstitutional, if Obama hadn’t vetoed it first. That’s because we have a system of checks and balances instead of one in which the will of the people as expressed by legislators rules supreme -- in no small part because our esteemed Founders didn’t actually trust "the people" as much as the Tea Party seems to think.

Furthermore, the binary, zero-sum view of governance in which power taken from government regulators will be returned directly to the individual makes for fiery rhetoric, but conveniently fails to acknowledge that limiting the power of government regulators actually tends to increase the amount of power corporations have in our lives. This, of course, plays right along with Republicans' steadfast commitment to the freedom of the wealthy to do whatever they want at everyone else’s expense.

Moreover, it strains credulity to believe that Republicans are really just concerned about representing the people’s will when they’ve done their darndest to block majority votes at every turn. Indeed, they were all too happy to deny the will of the 78% of Americans who wanted Congress to "do something" about global warming back in 2009 when climate legislation was still on the legislative agenda. Likewise, nary a voice is raised to protest the democratic implications of the inordinate power of senators from demographically tiny states like Maine and Montana over the direction of policy, nor the fact that coal-mining West Virginia gets a disproportionate voice in Congress compared to green energy-leader California. And while Republicans complain that agencies charged with implementing policy are led by unaccountable officials, they won’t confirm the judicial and executive appointees that require Senate approval.

No matter what the neat diagrams in high school civics books imply, the balance of power among different branches of democratic governments doesn’t exist in equilibrium but as a dynamic, constantly shifting state of affairs. So it’s important that we pay attention to the ways in which different actors attempt to shift that balance of power in their favor -- which means paying attention not only to accusations of "power grabs," but also to what those making the accusations stand to gain.