During chaotic protests looters make off with 18 precious artifacts, many more damaged 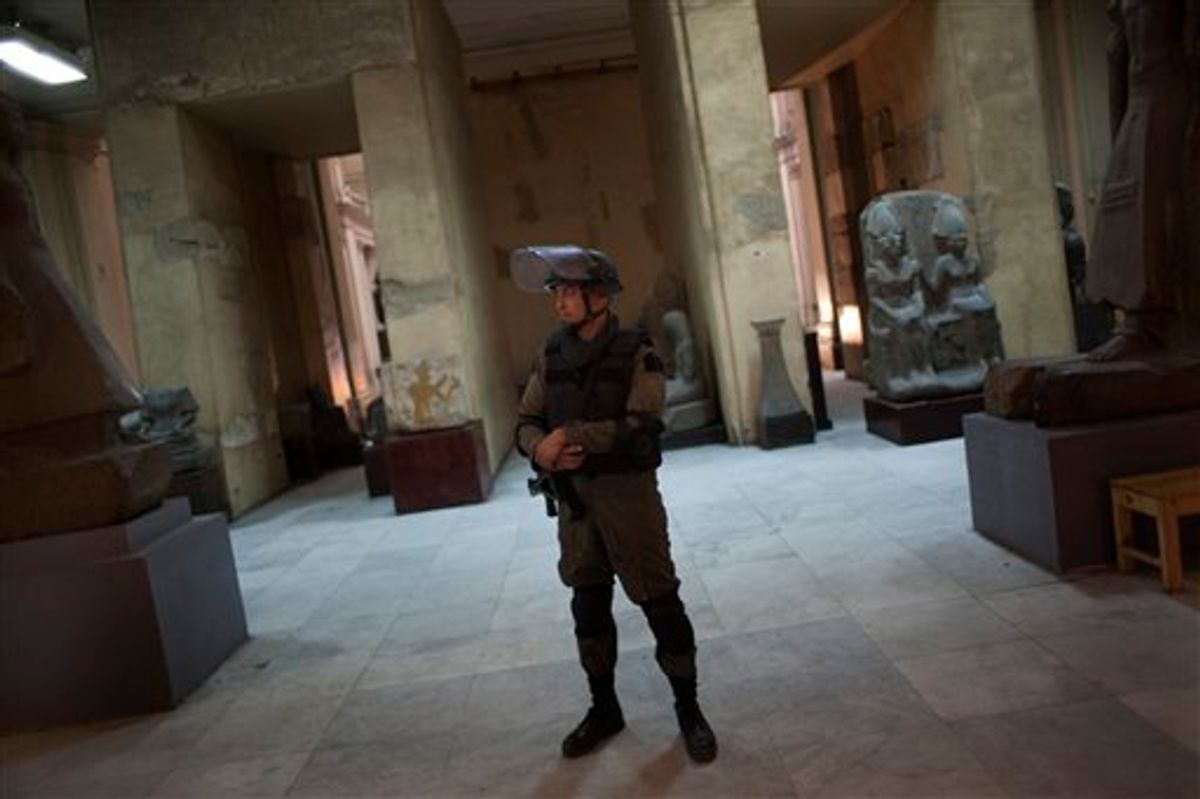 A member of the Egyptian special forces stands guard on the main floor of the Egyptian Museum in Cairo, Egypt, Thursday, Feb. 10, 2011. Would-be looters broke into Cairo's famed Egyptian Museum on Saturday, Jan. 29, ripping the heads off two mummies and damaging about 75 small artifacts before being caught and detained by army soldiers. (AP Photo/Emilio Morenatti) (AP)
--

A full inventory of the Egyptian Museum has found that looters escaped with 18 items during the anti-government unrest, including two gilded wooden statues of famed boy king Tutankhamun, the antiquities chief said Sunday.

The 18-day uprising that forced out President Hosni Mubarak engulfed the areas around the museum, on the edge of Cairo's Tahrir Square. On Jan. 28, as protesters clashed with police early on in the turmoil and burned down the adjacent headquarters of Mubarak's ruling party, a handful of looters climbed a fire escape to the museum roof and lowered themselves on ropes from a glass-paneled ceiling onto the museum's top floor.

Around 70 objects -- many of them small statues -- were damaged, but until Sunday's announcement, it was not known whether anything was missing.

Antiquities Minister Zahi Hawass said the museum's database department determined 18 objects were gone. Investigators searching for those behind the thefts were questioning dozens of people arrested over several days after last month's break-in.

The most important of the missing objects is a limestone statue of the Pharaoh Akhenaten standing and holding an offering table. Akhenaten is the so-called heretic king who tried to introduce monotheism to ancient Egypt.

"It's the most important one from an artistic point of view," said museum director Tarek el-Awady. "The position of the king is unique and it's a beautiful piece of art." During Akhenaten's so-called Amarna period, named after his capital, artists experimented with new styles.

Also gone is a gilded wooden statue of the 18th Dynasty King Tutankhamun, Akhenaten's son, being carried by a goddess. Pieces are also missing from another statue of the boy king wielding a fishing harpoon from a boat.

"We have the boat and the legs of the king, but we are missing other parts of the body," el-Awady said. "We are looking everywhere for them -- around the museum, outside, on the roof, from where the thieves got into the museum."

He said none of the missing objects was from the gated room containing the gold funerary mask of Tutankhamun and other stunning items from his tomb in the Valley of the Kings -- the museum's chief attractions. The looters did not break into the room, he said.

The other missing items are a statue of Nefertiti making offerings, a sandstone head of a princess and a stone statuette of a scribe from Amarna, a heart scarab and 11 wooden funerary statuettes of the nobleman Yuya.

Antiquities authorities also announced Sunday that thieves broke into a storage site at the royal necropolis of Dahshur, south of Cairo, on Feb. 11. They had no information yet on whether items were missing.

The Egyptian Museum remains closed and guarded by an army unit, but workers are cleaning the vast building and the garden around it. Efforts are being made to improve security.

On Sunday, the museum director and an architect walked around the roof of the 110-year-old building to draw up designs for upgrading security on the glass-paneled sections of the ceiling.

"We can't interfere with the original architecture of the building because it's a monument," el-Awady said. "But we are thinking about how to upgrade this and put in a new security system for the ceiling of the museum."

The security of Egypt's museums and archaeological sites came under scrutiny after the theft in August of a Van Gogh from an art museum in Cairo. El-Awady said the Egyptian Museum's alarms and other security systems were working during the looting.

The thieves caused considerable damage, breaking 13 display cases and tossing aside ancient objects in what museum staff believe was a frenzied search for gold.

"We pray to God that we'll never see another night like this," el-Awady said.