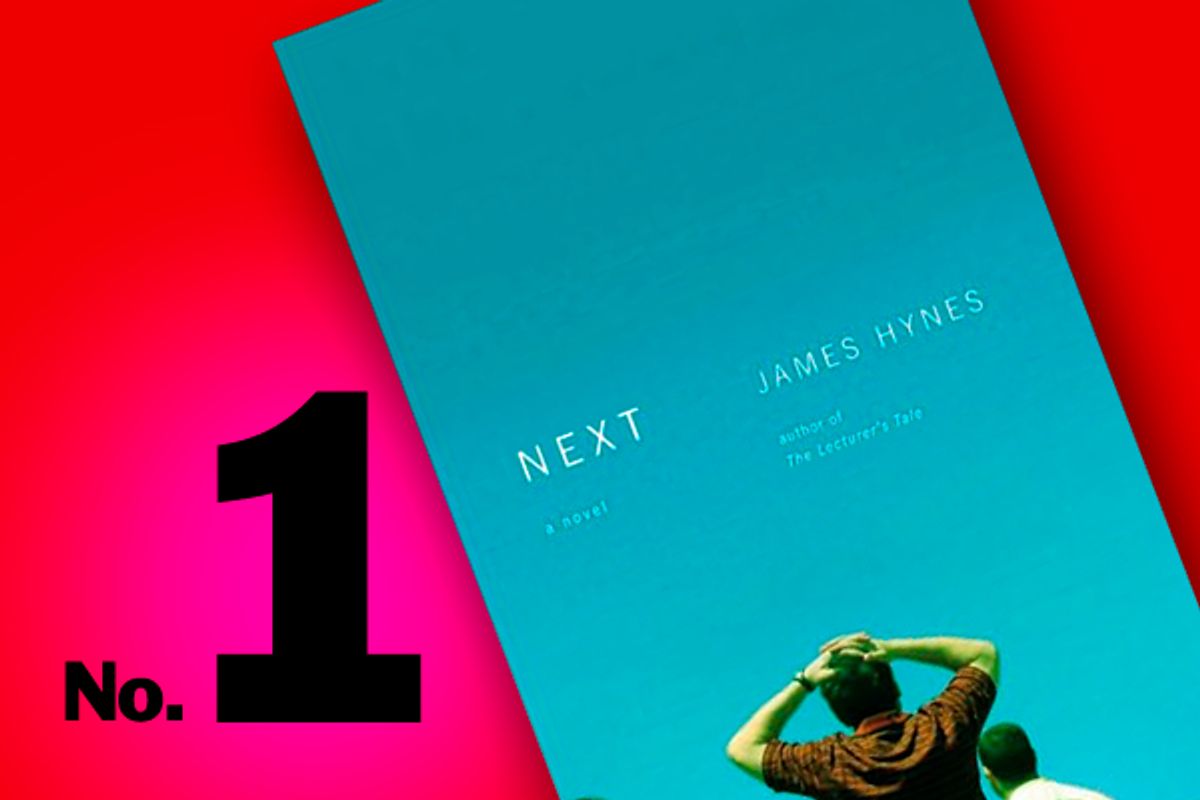 The porch railing creaks under their weight, and even drunk and excited Kevin wonders about the farmhouse's craftsmanship and hopes the Philosopher's Daughter's father is as good a handyman as he is a philosopher. He worries about toppling backward into the bushes, he worries about splinters, but the beer and the anxiety are making him last longer, otherwise he might have come the instant he was inside her. Then Lynda murmurs "Wait" right in his ear, and as he clutches her waist under her dress she unbends first one leg and then the other over the railing, settling tightly against him, taking him in even deeper. She tightens her calves against the railing and squeezes with her thighs, and he groans, because he's deeper inside this girl than he's ever been inside any girl before, and he presses his open mouth against the long, salty curve of her neck. He's inhaling her humidity, she's panting like an animal just above the top of his head. They can't move much -- if she thrusts too hard against him she'll topple them into the bushes -- but the song has finished with words and now it's just a driving sax, and they rock together to the beat, her sweat dripping into the dress bunched at her waist, her hands kneading his back, his face pressed between her salty breasts, her heart thumping against his lips. He can't move much, he can hardly breathe, but he can't stop now, and he hooks his chin over her shoulder, her hair scratching his nose and filling his mouth, and through it he can see the red window where the music's pouring out, he can see pumping limbs and torsos in the red light, hair swinging, heads shaking. There's someone in the window, he can't make out who in the darkness, just a silhouette against the red glow, catching a breeze through the screen, breathing in something other than sweat and beer and marijuana. Kevin wants it to be her, and he thinks, look at me, but he can't be sure, it's just a shape in the window, it might not be her, it might be someone else. Now the music is circling and building, just the rhythm section and an insinuating solo guitar, and as Lynda rocks against him, he surges with each bar of the solo, almost cresting but not quite, and he thinks, I want you to see me. He hopes this lasts forever, he hopes that it doesn't and that he comes like a waterfall, but either way he wants her to know, he wants her to see him. His heart hammers, his breath rasps through Lynda's hair. Turn around, he wills the silhouette in the window, this could have been us.

(The cab idles impatiently at the corner of Fifth and Congress. The cabbie breathes heavily through his nose; he has the phone in hand again, and he's staring at the little screen, as if willing it to ring.)

Now the guitar and the saxophone are trading off, leading each other on, and Lynda starts thrusting harder against him, faster than the beat, gasping like a runner. Kevin tries to grip her tighter, but she's so slippery under her dress and she's moving so urgently it's all he can do to keep them both on the railing. His thighs ache and his back hurts, and under his hands he can feel every muscle in her body pulling tighter. All he can do is hold on tight and flex his buttocks. Now her gasps are highpitched and squeaky and he hopes they finish before the song does because he doesn't want her to come out loud in the gap between the songs when everybody could hear them. Only her, he thinks, hanging on to Lynda for dear life, I only want her to know. Lynda digs her nails into the back of his neck, and he sinks his teeth into the taut curve of her throat to keep from groaning aloud. Her sweat pours over his fingers, and now she's whimpering rhythmically, chirping like a bird, and through the window the guitar and the saxophone are winding tightly round and round each other, and Kevin thinks, Turn around, just about to come himself, look this way.

(As the cab turns onto Congress, the cell phone sings, and the cabbie exclaims aloud, inclining his head toward the red phone like a tiny heart in his palm. There's a torrent of speech, both ends of the conversation talking excitedly over each other. The cabbie sounds like he's about to cry.)

Lynda sucks in her breath and her cunt seizes tightly around Kevin's cock and Kevin feels it all the way up his spine and down to his toes, blood pounding in his temples, his heart squeezing tighter than a fist, as if it will never relax again. He clenches his arms around her back, digging his fingers into her; he groans wordlessly into the salty flesh of her shoulder. He can feel his balls pumping into her. Then Lynda goes slack, her head drooping over his shoulder, her ass sagging back against his knees. His own limbs turn rubbery and he can barely hold her up, her sweat pooling under his palms. Through her tangled hair he sees bodies thumping in the living room, limned in red light. Nobody's in the window anymore. It's another song now, they fucked right past the end of the last one. Lynda's pulse is still pounding, she's panting against his cheek. His own heart is beating again, slow and hard, and he feels postcoital lassitude spreading through him like a barbiturate. Lynda sighs and rocks back, counting on him to keep her from sliding off his lap to the porch. Her breasts gleam in dark, and she lifts her elbows one more time and brushes back her sweat-stringy strands of hair and gives him the slowest, dirtiest smile he's ever seen, before or since, the same smile she'll give him a month or so later, when he finds her in bed with another guy.

"Hey, mister." The cabbie is looking right at Kevin through the gap between the minivan's bucket seats.

James Hynes is the author of "Kings of Infinite Space," "The Lecturer's Tale," "Publish and Perish," "The Wild Colonial Boy. "Next" is his most recent novel.