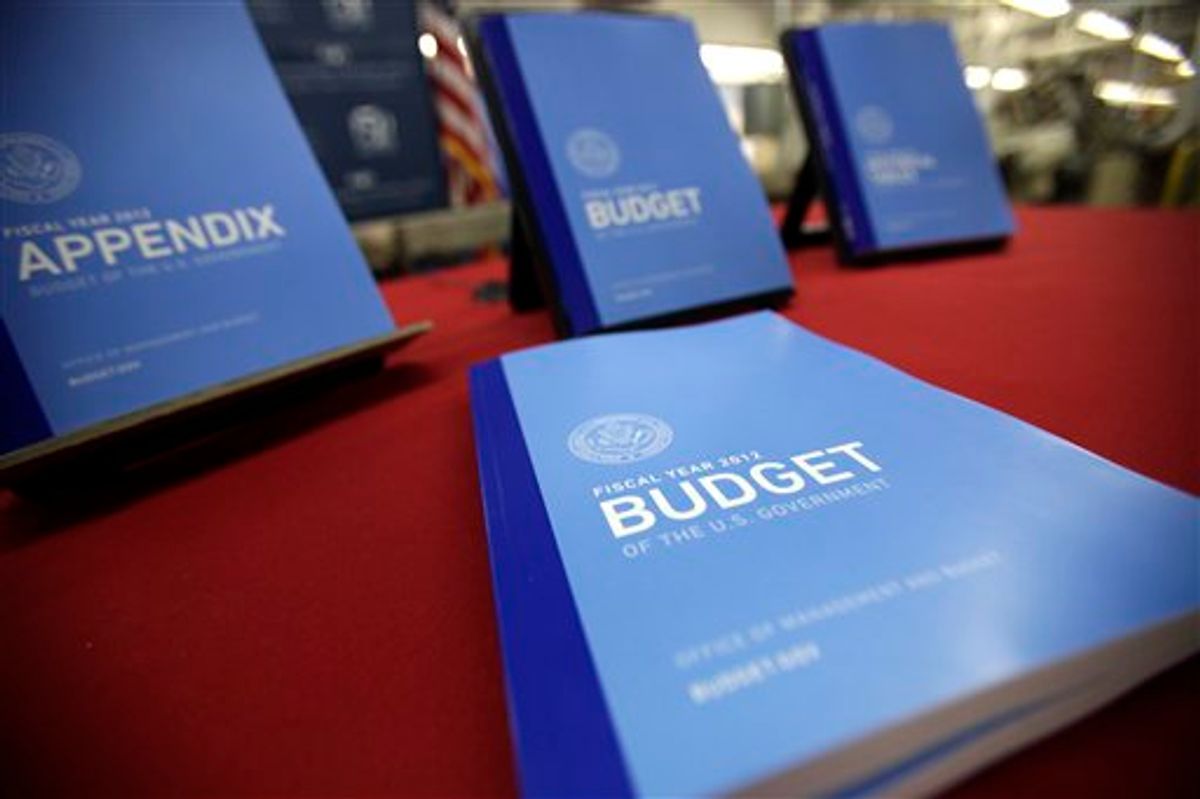 In this photo taken Feb. 10, 2011, the 2012 budget is on display at the U.S. Government Printing Office at Washington. President Barack Obama Obama will send his 2012 budget proposal to Congress on Monday, Feb. 14. According to an Office of Management and Budget summary obtained by The Associated Press, the administration will propose more than $1 trillion in deficit reduction over the next decade with two-thirds of that amount coming from spending cuts. (AP Photo/Jacquelyn Martin) (AP)
--

President Barack Obama is sending Congress a $3.73 trillion spending blueprint that pledges $1.1 trillion in deficit savings over the next decade through spending cuts and tax increases.

Obama's new budget projects that the deficit for the current year will surge to an all-time high of $1.65 trillion. That reflects a sizable tax-cut agreement reached with Republicans in December. For 2012, the administration sees the imbalance declining to $1.1 trillion, giving the country a record four straight years of $1 trillion-plus deficits.

Senior administration officials, who spoke on condition of anonymity in advance of the formal release of the budget, said that Obama would achieve two-thirds of his projected $1.1 trillion in deficit savings through spending cuts including a five-year freeze on many domestic programs.

The other one-third of the savings would come from tax increases, including limiting tax deductions for high income taxpayers, a proposal Obama put forward last year only to have it rejected in Congress.

The Obama budget recommendation, which is certain to be changed by Congress, would spend $3.73 trillion in the 2012 budget year, which begins Oct. 1, a reduction of 2.4 percent from what Obama projects will be spent in the current budget year.

The Obama plan would fall far short of the $4 trillion in deficit cuts recommended in a December report by his blue-ribbon deficit commission. That panel said that real progress on the deficit cannot be made without tackling the government's big three entitlement programs -- Medicare, Medicaid and Social Security -- and defense spending.

Obama concentrated his cuts in the one-tenth of the budget that covers most domestic agencies, projecting $400 billion in savings from a five-year freeze in this area. Some programs would not just see spending frozen at 2010 spending levels but would be targeted for sizable cuts.

Republicans, who took control of the House in the November elections and picked up seats in the Senate in part because of voter anger over the soaring deficits, called Obama's efforts too timid. They want spending frozen at 2008 levels before efforts to fight a deep recession boosted spending in the past two years.

They are scheduled to begin debating on Tuesday a proposal that would trim spending by $61 billion for the seven months left in the current budget year, which ends Sept. 30. They also have vowed to push for tougher cuts in 2012 and future years.

The president's projected $1.65 trillion deficit for the current year would be the highest dollar amount ever, surpassing the $1.41 trillion deficit hit in 2009. It would also represent 10.8 percent of the total economy, the highest level since the deficit stood at 21.5 percent of gross domestic product in 1945, reflecting heavy borrowing to fight World War II.

The president's 2012 budget projects that the deficits will total $7.21 trillion over the next decade with the imbalances never falling lower below $607 billion, a figure that would still exceed the previous deficit record before Obama took office of $458.6 billion in 2008, President George W. Bush's last year in office.

Administration officials project that the deficits will be trimmed to 3.2 percent of GDP by 2015 -- one-third of the projected 2011 imbalance and a level they said was sustainable.

While cutting many programs, the new budget does propose spending increases in selected areas of education, biomedical research, energy efficiency, high-speed rail and other areas Obama judged to be important to the country's future competitiveness in a global economy.

In the energy area, the budget would support Obama's goal of putting 1 million electric vehicles on the road by 2015 and doubling the nation's share of electricity from clean energy sources by 2035.

The budget proposes program terminations or spending reductions for more than 200 programs at an estimated savings of $33 billion in 2012. Programs targeted for large cuts included Community Development Block Grants, trimmed by $300 million, while a program that helps pay heating bills for low-income families would be cut in half for a savings of $2.5 billion while a program supporting environmental restoration of the Great Lakes would be reduced by one-fourth for $125 million in savings.

The biggest tax hike would come from a proposal to trim the deductions the wealthiest Americans can claim for charitable contributions, mortgage interest and state and local tax payments. The administration proposed this tax hike last year but it was a nonstarter in Congress.

While Obama's budget avoided painful choices in entitlement programs, it did call for $78 billion in reductions to Pentagon spending over the next decade by trimming what it views as unnecessary weapons programs such as the C-17 aircraft, the alternative engine for the Joint Strike Fighter aircraft and the Marine expeditionary vehicle.

Administration officials said that the savings from limiting tax deductions for high income taxpayers would be used to pay for keeping the Alternative Minimum Tax from hitting more middle-class families over the next two years.

Another $62 billion in savings would be devoted to paying to prevent cuts in payments to doctors in the Medicare program over the next two years. Congress has for several years blocked the cuts from taking effect but the effort drove the deficits higher because lawmakers did not find offsetting savings.

The budget will propose $1 billion in cuts in grants for large airports, almost $1 billion in reduced support to states for water treatment plants and other infrastructure programs and savings from consolidating public health programs run by the Centers for Disease Control and various U.S. Forest Service programs.

The administration will also propose saving $100 billion from Pell Grants and other higher education programs over a decade through belt-tightening with the savings used to keep the maximum college financial aid award at $5,550, according to an administration official who spoke on condition of anonymity in advance of the budget's Monday release.

The surge in deficits reflect the deep 2007-2009 recession, the worst since the Great Depression, which cut into government tax revenues as millions were thrown out of work and prompted massive government spending to jump-start economic growth and stabilize the banking system.

Republicans point to still-elevated unemployment levels and charge the stimulus programs were a failure. The administration contends the spending was needed to keep the country from falling into an even deeper slump.