The real fight is over how to keep the government going past March 4. Everything else is a sideshow 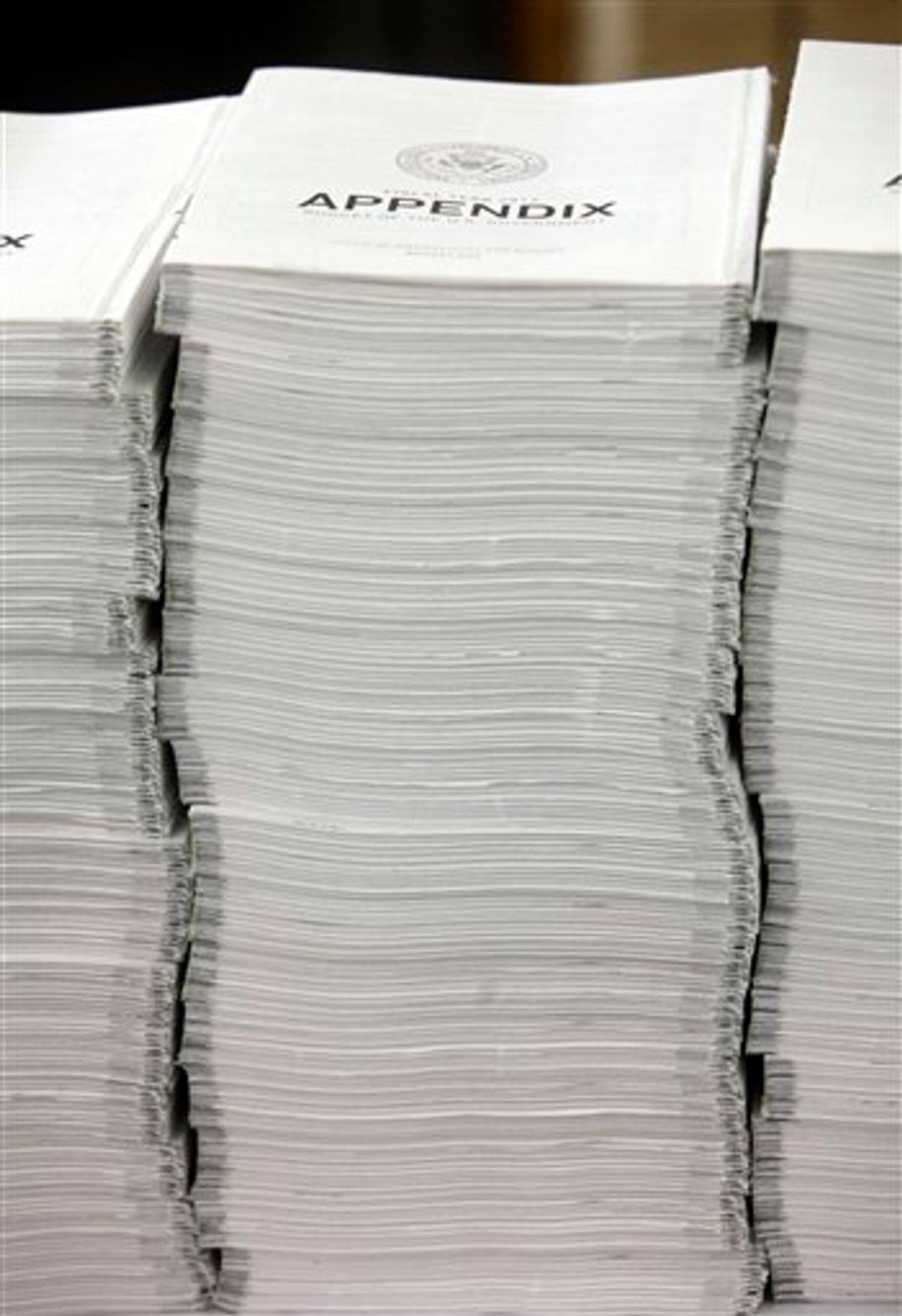 In this photo taken Feb. 10, 2011, stacks of the appendix of the 2012 budget wait to be bound at the U.S. Government Printing Office at Washington. President Barack Obama Obama will send his 2012 budget proposal to Congress on Monday, Feb. 14. According to an Office of Management and Budget summary obtained by The Associated Press, the administration will propose more than $1 trillion in deficit reduction over the next decade with two-thirds of that amount coming from spending cuts. (AP Photo/Jacquelyn Martin) (AP)
--

Everybody's talking about Obama's budget, and everyone is disappointed. If you are a deficit hawk, he's not cutting enough -- the predicted deficit for the next fiscal year, after all, is $1.65 trillion, which would be Obama's biggest deficit so far. But if your primary worry is unemployment, Obama is cutting too much too soon, cravenly abandoning stimulus before the economy is ready.

I'm going to have much more on this later today, but first, a quick observation: Obama's budget is irrelevant. Obama's last budget was never passed by Congress -- and that was with large Democratic majorities in both the House and Senate. This one -- at least in the form it's in now -- will certainly never get passed either, now that  Republicans are in firm control of the House.

The government is currently operating under the terms of a temporary "continuing resolution" that will expire on March 4. The only budget battle that matters is the fight over what kind of "compromise" the White House cuts with Republicans to get the continuing resolution extended. The current Republican position, egged on by their class of newly arrived Tea Party deficit hawks, requires much more severe cuts than anything the White House is comfortable with. Last week, pressure from the rank-and-file forced House GOP leaders to demand deeper cuts than they had previously planned, a clear sign that deficit hawk pressure is going to be front and center in the negotiations over the continuing resolution. It certainly doesn't strain credulity to imagine that Tea Party Republicans would love to force a government shutdown if they don't get what they want.

So any time you read or hear anything about the budget in the next few weeks, put it in this framework: If the White House and the House GOP don't come to an agreement in the next three weeks, the government will shut down. Republicans want deeper cuts than the White House, and may be ready to play hardball. Everything else is just a sideshow.