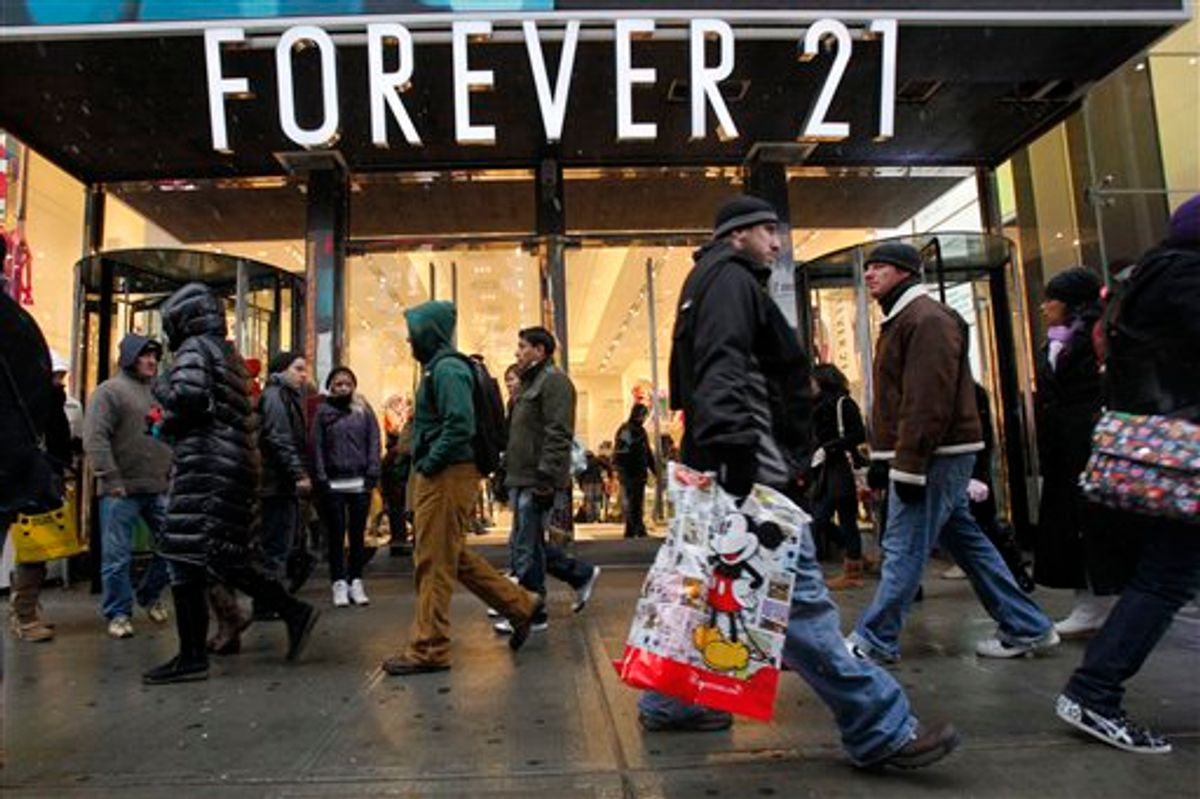 FILE - In this Dec. 26, 2010 file photo, people walk past a Forever 21 store in New York's Times Square. The population of the U.S. has grown by 8 million people since the previous record was set. That means there were millions more shoppers in stores this Christmas, driving up the sales total. But the average amount of spending per person was down from a few years ago, suggesting consumers are still slower to pull out their wallets. (AP Photo/Mary Altaffer, file) (AP)
--

The era of falling clothing prices is ending.

Clothing prices have dropped for a decade as tame inflation and cheap overseas labor helped hold down costs. Retailers and clothing makers cut frills and experimented with fabric blends to cut prices during the recession.

But as the world economy recovers and demand for goods rises, a surge in labor and raw materials costs is squeezing retailers and manufacturers who have run out of ways to pare costs.

Cotton has more than doubled in price over the past year, hitting all-time highs. The price of other synthetic fabrics has jumped roughly 50 percent as demand for alternatives and blends has risen.

Clothing prices are expected to rise about 10 percent in coming months, with the biggest increases coming in the second half of the year, said Burt Flickinger III president of Strategic Resource Group.

"All of our brands, every single brand, will take some price increases," said Eric Wiseman, chairman and CEO of VF Corp., whose brands include The North Face, Nautica, Wrangler and Lee. Cotton accounts for half the production cost of jeans, which make up about one-third of VF's sales, he told investors in November.

Higher costs also will affect how clothes are made. Clothing makers are blending more synthetic fabrics like rayon and designing jeans with fewer beads and other embellishments. Shoppers also will have fewer color choices.

Retailers are trying to figure out whether consumer demand that gave them strong holiday sales will last. The fear is higher prices will nip that budding demand. Stores that cater to low- and middle-income shoppers will have the hardest time passing along price increases.

"We have been so used to deflation for years and years," said David Bassuk, managing director in the retail practice of AlixPartners. "Customers are going to be surprised."

"'I'm not going to spend any more than $50 for a pair of jeans," said Mignanelli, a stay-at-home mom shopping at The Garden State Plaza in Paramus, N.J., last week. "I'll just have to cut back on the extras."

Even affluent shoppers, whose spending has rebounded, may bristle.

"It does give me some pause," said Jimmy Franco, a 47-year-old publicity executive and fan of Brooks Brothers' shirts. "Instead of buying two, I may just get one and a pair of socks. There's a certain amount of money that I'm prepared to spend."

Cotton prices have jumped to a 150-year-high, rising to $1.90 per pound on Friday, more than double what it was a year ago and just ahead of the $1.89 record hit during the Civil War, according to the International Cotton Advisory Committee.

Cotton prices began soaring in August of 2010 after bad weather cut harvests in major producing countries including China, the U.S., Pakistan and Australia.

Restrictions on exports from India, the world's second-largest cotton exporter behind China, have also produced cotton shortages. On top of that, worldwide demand for cotton has risen as the global economy improves.

Raw materials account for 25 percent to 50 percent of the cost of producing a garment. Labor ranges from 20 percent to 40 percent, depending on how complicated it is to make, Bassuk said.

On the production side, many Chinese factories that shut down temporarily in the depths of the recession still haven't returned to capacity. As they ramp up, they're finding they have to pay workers more because of labor shortages, said John Long, retail strategist at consulting firm Kurt Salmon.

Up until now, retailers have resisted passing along price increases to shoppers by shifting production to lower-cost regions like Vietnam, turning to other materials and absorbing cost increases.

But they're reaching the limit, according to Kevin Burke, president and CEO of the American Apparel & Footwear Association.

Mom-and-pop stores are most vulnerable because they have less power to negotiate better prices with suppliers than, say, Wal-Mart Stores Inc. But even the world's largest retailer is feeling the pressure.

"There's no doubt there may be some price increases that come up, but we don't want to ever let that be the first answer ... that just because cotton prices are up, that we're automatically going to pass that on to consumers," said Mike Duke, Wal-Mart's CEO and president in a recent interview.

Mary Hutchens, owner of Full of Beans, a 25-year-old children's clothing store in Chevy Chase, Md., worries that price increases could be a death blow. She said she has to discount heavily to stay in business and isn't sure she'll be able to pass along the costs.

"Everybody has changed their habits since the recession," she said. "I'm just trying to hold on."