"Alone Together": Is technology ruining our ability to be alone? 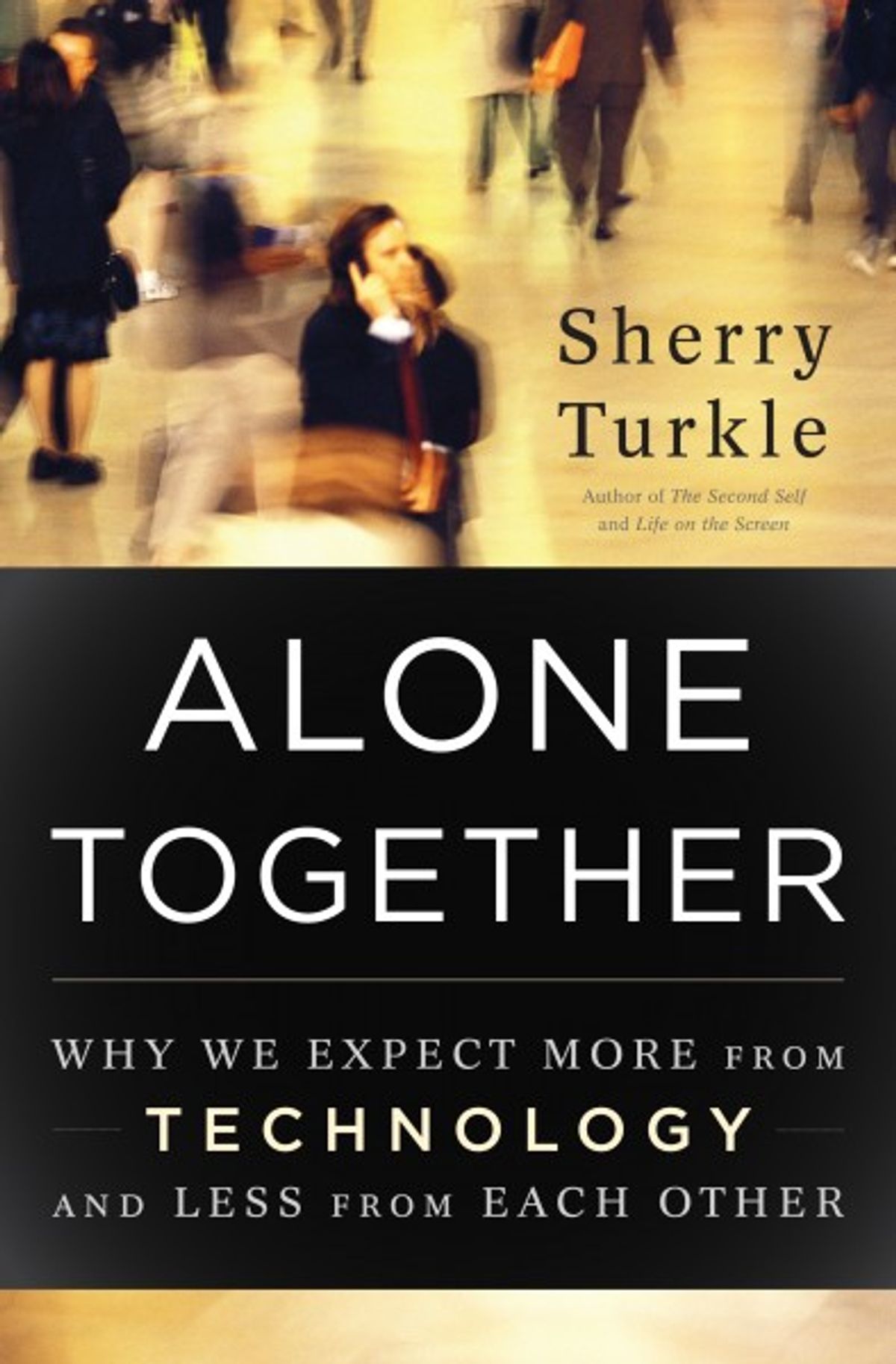 Sherry Turkle's new book, "Alone Together," ends in mourning. In October 2009, the author, an MIT professor of the social studies of science and technology, went to her local synagogue for Yiskor, the special Yom Kippur service that remembers the dead. There she heard the rabbi deliver a sermon about the importance of talking to the deceased and communicating four messages to them: "I'm sorry. Thank you. I forgive you. I love you."

"That is what makes us human, over time, over distance," Turkle says of our ability to talk sincerely to other human beings, whether they belong to our past or our present. Our "knowledge of mortality" and our "experience of the life cycle" is conveyed in just such simple messages: "I'm sorry. Thank you. I forgive you. I love you." They are the most intimate words we can say to another. Without them, she suggests, we are machines akin to the robots in Philip K. Dick's "Do Androids Dream of Electric Sheep?" which imagines a future in which robots and humans are indistinguishable.

Dick's classic story was adapted for the movies by Ridley Scott as "Blade Runner." But in this age of Facebook, Twitter and increasingly "intelligent" robots with names like Kismet and Paro, Turkle tells us, "Blade Runner" has been adapted by all of us: We are being herded toward what she ominously calls "the robotic moment," a place in which we will rely on machines to shape our regret, gratitude, forgiveness and love.

"People disappoint; robots will not" -- so she explains the great seduction of devices that behave like human beings. Today, she warns us, we are becoming so "immersed in technology that we ignore what we know about life." Indeed, this epochal robotic moment may have already arrived while an increasingly wired human race has been too busy texting, tweeting and friending to notice.

As "Alone Together," based on interviews with hundreds of subjects over 15 years of research, illustrates, this ignorance about the creeping mechanical translation of our human instincts is afflicting old and young alike. When Turkle introduces 76-year-old Andy to "My Real Baby," a simulated human infant, he is delighted: "Now I have something to do when I have nothing to do," Andy confesses. Seven-year-old Brooke yearns to talk to a robot called Cog so that she can become the machine's dedicated tutor. And Turkle considers the robot-makers, too -- from Norbert Weiner, the inventor of cybernetics who believed it was "conceptually possible" to send a person over an electric wire, to Aaron Edsinger, the inventor of a device called "Domo," which, according to Turkle, "really can have a conversation."

But is the nature of conversation itself being altered by its new forms? Turkle talks to high school students who are sending 6,000 text messages a day, thereby predicating their whole identity on electronic communications. "If Facebook were deleted, I'd be deleted," one 16-year-old student confesses to Turkle. Such fascination with social media is fostering what Turkle -- a psychoanalytically trained psychologist -- calls a "hyper-otherdirectedness" in its proponents, a "collaborative self" that no longer has the ability to be alone and privately reflect on its emotions.

As an elegy for the death of intimacy, "Alone Together" -- for all its noble intentions -- fails, for the most part, to establish a really close relationship with the reader, in part because of its medium. The 348-page, richly footnoted tome has the form of a conventional academic book, but its message belongs to a deeply layered piece of philosophy or even fiction. So while I loved Turkle's introduction, her conclusion and, in particular, her deeply moving epilogue, the rest of the occasionally repetitive and unstructured narrative could have done with a bit more rabbi and a bit less academic psychologist.

But that's a quibble. "Alone Together" is a major empirical and theoretical work that illuminates the crisis of humanity at the dawn of the digital century. Turkle has laid down a gauntlet for the rest of us to pick up. One can only hope that rabbis, novelists and other engineers of the human soul will do so, translating Turkle's vitally important message into more urgent and intimate forms.