Hussein Tantawi, a.k.a. "Mubarak's Poodle," leads ruling council amid doubts of his allegiance to radical change 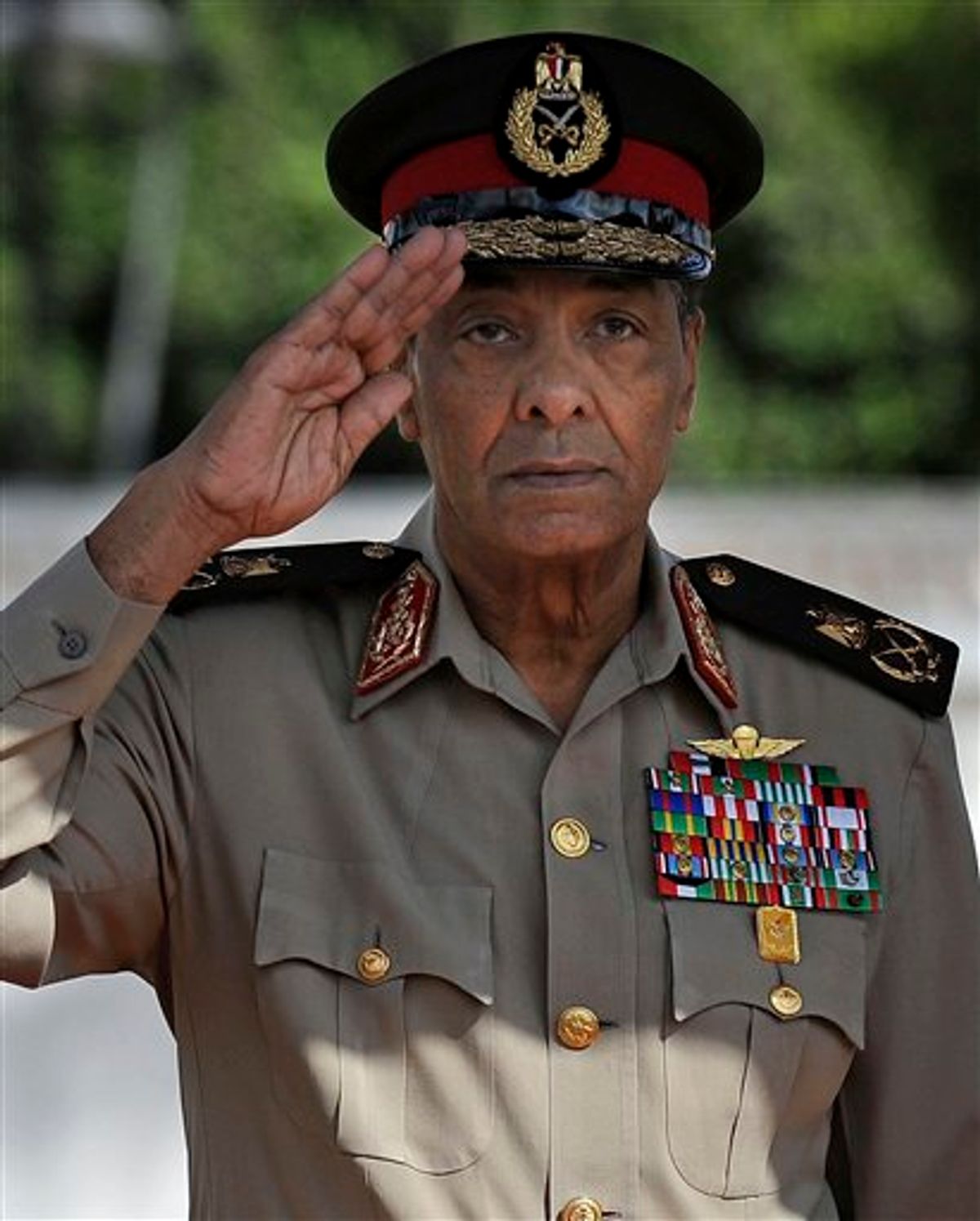 FILE - In this May 5, 2009, file photo released by the U.S. Department of Defense, Egyptian Minister of Defense Mohamed Hussein Tantawi stands next to Defense Secretary Robert Gates, not seen, during the playing of the U.S. national anthem at the Ministry of Defense in Cairo before reviewing troops. Egyptians who demonstrated for 18 days against Hosni Mubarak's rule saw Tantawi and his troops as their savior and he is the new leader of what many Egyptians hope will be a radical transformation of their nation.(AP Photo/DOD, Master Sgt. Jerry Morrison) NO SALES (AP)
--

A U.S. diplomatic cable reported that the defense minister was known as "Mubarak's poodle," a derisive reference to his unswerving loyalty to the former authoritarian president.

Yet huge crowds of Egyptians who demonstrated for 18 days against Hosni Mubarak's rule saw Defense Minister Hussein Tantawi and his troops as their savior. They appealed to the military to intervene in Egypt's crisis, and the generals did.

Tantawi, the head of the ruling council that took power from Mubarak on Friday, is the new leader of what many Egyptians hope will be a radical transformation of their nation. The 75-year-old career soldier will be one of the most scrutinized figures in Egypt in the months ahead when his council has promised to steer the country toward a democratic system, sealed by elections.

But he is an unlikely steward for the task, a man said to be resistant to change and out of touch with the younger officer corps.

"Tantawi and the army gave a strong message to the public and Mubarak: We are with the people and their legitimate demands," said Abdullah el-Sinnawi, editor-in-chief of el-Araby, an opposition weekly newspaper. "He managed to unify the army under his command," el-Sinnawi added. Some low- and middle-ranking officers did not hide their sympathy for the protesters, cheering and mingling with demonstrators.

The generally positive reviews of the military's actions, coming so soon after they took power, surprised some who thought Tantawi lacked the reflex for change.

On Tuesday, the Armed Forces Supreme Council said a panel of experts would craft constitutional amendments so as to allow free elections later this year. Previously, the military dissolved parliament, which was stacked with Mubarak loyalists, and suspended the constitution, meeting key demands of pro-democracy activists.

The military, which has long received huge quantities of U.S. aid, maneuvered deftly in the crisis. It did not use force against protesters, earning the gratitude of crowds that appealed for the armed forces to push Mubarak from power after nearly 30 years.

The military had sought a neutral role in the conflict. But it swung against the president in his final hours to prevent more bloodshed and chaos, saying it did not want all of Egypt's achievements to be lost. The shift was evident on the ground, where soldiers tossed sweets, cookies and bottles of water to protesters outside a presidential palace in Cairo.

Also leaked U.S. diplomatic indicated there may have been some tensions between Tantawi and the Mubarak family. They said Tantawi was frustrated with the prospect that Mubarak's son Gamal. might ascend to the presidency. Gamal Mubarak, in turn, was believed to be hostile to Tantawi and wanted him to be removed.

Tantawi himself showed populist savvy during the crisis by visiting Tahrir Square, the protest encampment occupied by tens of thousands of anti-Mubarak activists, who frequently chanted slogans such as "the army, the people, one hand," extolling their unity.

During his visit about midway through the crisis, he appealed to the crowds to recognize Mubarak's early concessions, including a promise not to run for re-election and an offer of dialogue. Protesters, however, were not satisfied.

Tantawi was the former commander of the elite Republican Guards, who protect the president and his palaces. As defense minister, he had a much lower profile than a predecessor, Abdel-Halim Abu Ghazala, who was widely popular among troops and civilians and was even talked about as a possible successor to Mubarak.

Mindful of that popularity, Mubarak sacked Abu Ghazala in 1989. In contrast, U.S. diplomatic cables released by WikiLeaks, the secret-sharing website, cited a report that army officers were disgruntled and disdainful of Tantawi, referring to him as a lackey of Mubarak who was incompetent and driving the military into decay.

A 2008 cable said of Tantawi: "He and Mubarak are focused on regime stability and maintaining the status quo through the end of their time. They simply do not have the energy, inclination or world view to do anything differently."

Tantawi rarely appears in public, and has not made an appearance since Mubarak's resignation on Friday. Previously, Egyptians saw him on television, saluting troops during annual celebrations, at funerals of top commander and at meetings with Mubarak.

One former sports and youth minister, Abdel Moneim Emra, said Tantawi opposed privatization, which was associated with Gamal Mubarak -- a wealthy businessman who rose in the ranks of the ruling National Democratic Party and was considered a possible successor to his father.

El-Sinnawi, the newspaper editor, said Tantawi always perceived the privatization policies of Gamal and his associates as a kind of "new imperialism" that was draining Egypt's ownership of its resources.

"He saw them as Western-minded kids who are selling the country," el-Sinnawi said.

Tantawi's philosophy recalls the anti-imperialism of Gamal Abdel Nasser, an Arab nationalist and military man who overthrew the monarchy in 1952 and implemented reforms in Egypt that were inspired by socialism.

He was appointed chief commander of the armed forces in May 1991.