Can the Egyptian people trust the army? 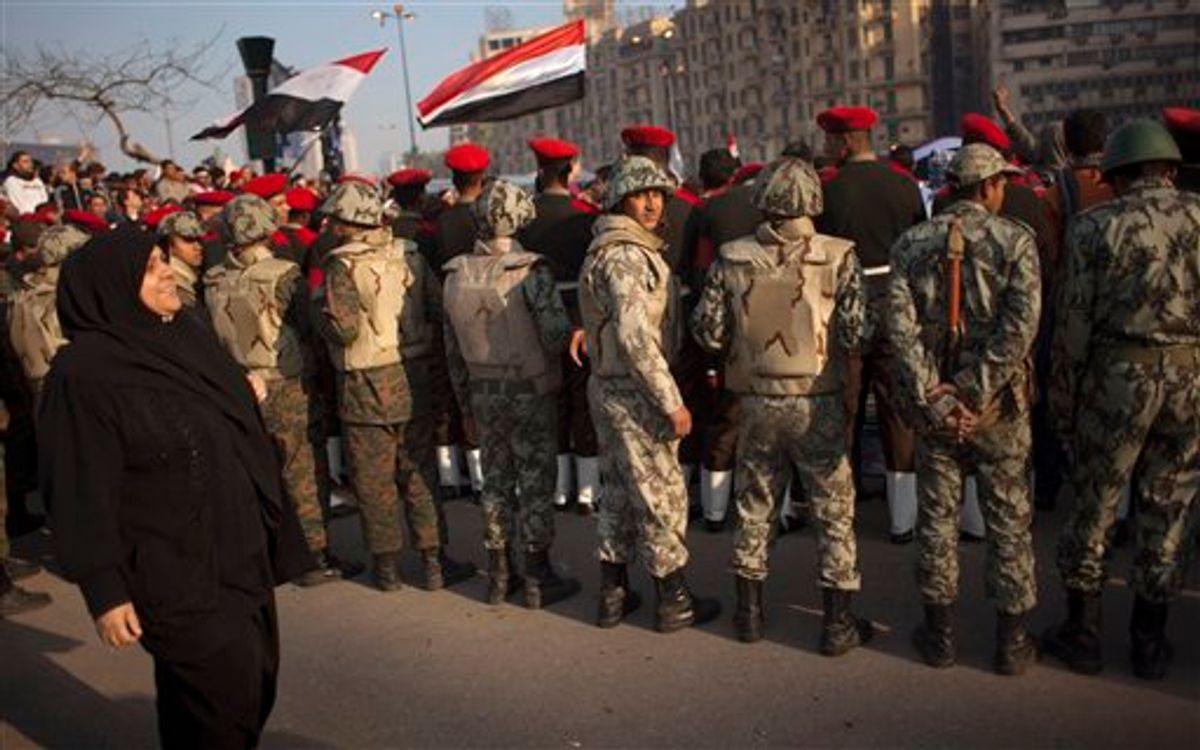 Egyptian army military police and army soldiers form a line to clear protesters from the street and enable vehicles to pass in Tahrir Square in downtown Cairo, Egypt, Sunday, Feb. 13, 2011. Egypt's military is taking down the makeshift tents of protesters who camped out on Tahrir Square in an effort to allow traffic and normal life to return to central Cairo. There were a few verbal altercations between soldiers and protesters Sunday morning as the tents were removed, but the process was generally peaceful. (AP Photo/Emilio Morenatti) (AP)
--

Egyptians have good reason to celebrate the long-awaited departure of Hosni Mubarak. But their jubilation comes with a cautionary note: Power is now in the hands of Egypt's military, an arrangement that hasn't always worked out for pro-democracy Egyptians.

A military coup in 1952 forced the Egyptian monarch King Farouk to abdicate the throne, and the Egyptian people welcomed what they saw as the end of British imperial dominance over their country. Within a few years, though, Gamal Nasser, one of the leaders of the coup, dissolved parliament and established the one-party state that Mubarak inherited in 1981. Mubarak, then, was a product of military rule

The question is whether things will play out differently in 2011 -- if, this time around, military rule in Egypt will represent merely a bridge to full-blown democracy. We spoke to Medhat Credi, an Arabic language and culture professor at New York University, to find out just how optimistic we should be.

The army was doing very well under Mubarak's leadership.  So why are the Egyptian people so pleased that it has now officially taken control of their country?

It's not that they are pleased. They are pleased that the army has behaved. Now there must be some kind of transition. There is a vacuum. Mubarak has left, the cabinet has been dismantled, so somebody must run the country. The only institution that exists is the army. Hopefully the army learned its lesson and it will behave. But it's not that they trust it, it's instead like the Ronald Reagan expression, trust but verify. That's why the demonstrators are asking for a timetable. They've so far been given one. In six months they will have an election.


Is there reason for people to trust the army to do it right this time?

Well, I don't think you can trust them. You cannot trust anybody. You should always be on your guard. You should make sure that the army does what it says it will do. They abolished the parliament because it's a fake parliament, they promised an election in six months, a commission to write a new constitution -- so you don't trust them, but you make sure they do what they said they would do.

Do the people have any kind of check on the military, to make sure things go right?

So there's no way of knowing.

There's no way of knowing. But I'm hopeful, I'm optimistic. I'm optimistic because the army has behaved so far. The only suspicion is that the head of the army [Mohammed] Tantawi, the minister of defense, is from the old guard, and all the high-ranking officials are from the old guard. Did they understand what happened? Did they digest what's going on and then change their behavior? And I hope this is the case. If they didn't, then I think the youth will come back to the square. There is some kind of organization. It's not totally spontaneous. There's an element of spontaneity but there's some organization behind it. We just don't know who the leaders are.

Do you see any repercussions elsewhere in the Middle East?

I hope. There was a demonstration in Algeria, in Yemen against [president] Ali Abdullah Saleh ... Yesterday I was watching one of the talk shows, and Monica Crowley said, "The only democracy in the Arab world is Iraq, which we have created." Every day you have a suicide bombing in Iraq. I don't think this is a real democracy. But I think Egypt is on the right track, and hopefully it will come back as it used to be before 1952, as a parliamentary democracy with many parties and fair and free elections.

But essentially, we'll see what happens. Nobody can predict the future. But as things are going we can hope that they will follow the right path.