How "The Good Wife" became one of TV's best shows 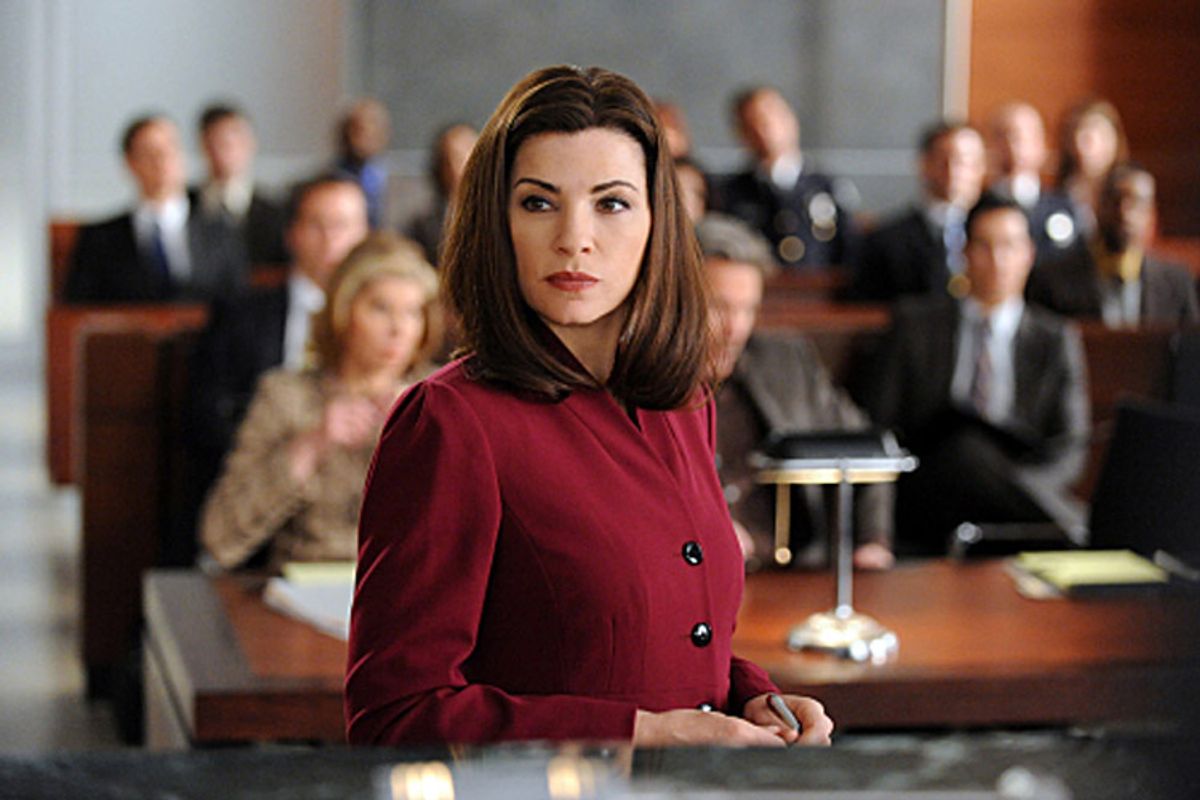 "Last Shot"--Alicia Florrick (Julianna Margulies) assists in the trial of ballistics expert Kurt McVeigh, Dianeâs on and off-again love interest, who is being sued for testimony that he gave in a murder trial of an accused cop killer who was recently exonerated, on THE GOOD WIFE, Tuesday, Feb. 22 (10:00-11:00 PM, ET/PT) on the CBS Television Network. Photo: David M. Russell/CBS Â©2011 CBS Broadcasting Inc. All Rights Reserved. (David M. Russell)
--

Chicago attorney Alicia Florrick (Julianna Margulies), the heroine of "The Good Wife," isn't one of those scenery-chewing human dynamo characters who often anchor network dramas. If you saw her in a crowd and didn't recognize her as the embattled wife of a disgraced Cook County state's attorney Peter Florrick (Chris Noth), you might not form any immediate impression beyond the fact that she was attractive, elegant and watchful. She's the sort of person who never speaks just for the sake of speaking; she reads the room first, and probably makes a mental flow chart to remind herself of who's powerful and who's not, and what consequences might accrue if she's too familiar with this person or that person. That's not a sign of timidity; it's a life skill. Alicia acquired it from being a politician's wife, a lawyer and a woman -- though not necessarily in that order. She's fascinating -- a plausibly real woman in a medium dominated by bigger-than-life caricatures, and the focal point of the most nuanced and intelligent drama on network TV.

Created by Robert and Michelle King, "The Good Wife," which is midway through its second season, isn't what network executives or TV critics would call a "buzz" show; it's not the sort of series that inspires detailed next-day recaps and comments threads with a hundred entries. Like so many shows on CBS -- a network that made a commitment to old-fashioned, frankly rather square programs about a decade ago, when the major broadcasters were falling all over themselves to produce sex-and-violence-packed, heavily serialized, PG-rated rip-offs of "The Sopranos" and "Six Feet Under" -- it's a series that splits the difference between serialized, novel-for-television-type storytelling and one-offs. It has an umbrella -- the story of Alicia putting her life back together after her husband's disgrace in a corruption and infidelity scandal, then reluctantly getting involved in his bid for reelection. But you don't have to know anything about that to jump into the series, because the individual episodes stick to the standard crime-and-legal-show template, following Alicia and her colleagues at a prestigious law firm as they represent clients in all sorts of cases -- everything from class-action lawsuits against polluters and negligent railways companies to private citizens accused of felony offenses and whistle-blowers calling foul on corrupt businesses and government agencies.

But this description doesn't quite capture the sneaky excellence of "The Good Wife," which pays closer attention to the minute details of human interaction than almost any network drama you can name. For a star-packed, glossily produced CBS series that isn't trying to reinvent the dramatic wheel, "The Good Wife" is a remarkably uncompromised work. Although the timelines are necessarily compressed (a lawsuit that would normally take months or years to play out gets resolved within the hour), the series has yet to show us a single event or character that could not exist in reality. And the carefully tended environment, with its intricate network of individual and institutional relationships, gives the show a more dense, lived-in feel than network dramas typically provide. Imagine Tom Wolfe's "The Bonfire of the Vanities" without the hysteria.

On so many shows built around a workplace, you get the sense that there is no world beyond the law firm or the courthouse or the emergency room or wherever -- that the place where the hero or heroine works is the center of the universe, and that the rest of reality flows in and out of its front doors. "The Good Wife" doesn't just resist that kind of reflexive narcissism, it rejects it outright. Alicia's law firm is a hothouse environment -- the show does a very good job of establishing the low-key but high-pressure dynamics of a prominent law firm, where people try to appear relaxed, sensitive and classy while secretly jockeying for the best position and the biggest payday possible -- but we're always aware that it's not the only reality. Other hothouses keep intersecting and overlapping with it: the law firms and consulting companies that assist or compete with Alicia's employers; the political machines of the affable but exceptionally ruthless Peter Florrick and his nemesis, prosecutor Glenn Childs (Titus Welliver, in his best performance and most interesting character since "Deadwood"); and the Chicago-area media, which periodically release unsavory bits of information that affect politics, the law and public life in general.

The series understands how news organizations can be used as weapons, and how they knowingly allow themselves to be used as weapons. Nearly every episode has a moment where Florrick's campaign or Alicia's case-of-the-week are thrown into a tizzy by the suspiciously timed release of a damaging revelation (sometimes accurate, sometimes false or heavily manipulated). The next step is always to play detective and ask, Who stands to benefit from this, and how can we neutralize its impact?  The news reports are just the most visible manifestation of the show's belief that information is power: Whether the end goal is to win an election or a case, the battle is usually decided by one side's ability to dig up, tease out or otherwise own a particular fact that the other side doesn't have -- or counter one bit of information or one powerful image with another.

Some of the best subplots this year have revolved around a third candidate for the state's attorney job, Wendy Scott-Carr (Anika Noni-Rose), an African-American woman. An episode last fall had Wendy battling accusations that she had a breast augmentation procedure, which seemed to contradict her posture as a champion of society's dispossessed; it turned out she was a Stage 2 breast cancer survivor who'd had a double mastectomy (which happens to be the case with the real-life Rose). In "The Silly Season," an excellent episode that aired earlier this month, Peter Florrick's campaign tried to stir up African-American resentment against Wendy by circulating a flier with a picture of her smooching her white husband and a caption suggesting that because she married a white man, she wasn't truly black. The scene where Wendy confronted Alicia about the flier -- and threatened to release a counter-smear against her husband, who paid for an abortion for their teenage son's girlfriend -- showcased one of the series' greatest strengths: its facility for showing how women sometimes deal with crises by appealing to other women's sense of solidarity as women (and mothers, and wives), only to discover that the invisible-sisterhood angle will only get you so far. Margulies' performance in this scene was masterful; you could see Alicia weighing her emotional solidarity with Wendy, and her innate sense of decency, against the need to stand with her husband in an anything-goes political battle. As Childs told Rose, "We could have chosen to go into the aluminum siding business, but we didn't. We chose politics." (And I haven't even gotten into one of the most interesting aspects of this episode -- the fact that much of it was told from the point of view of Matt Czuchry's Cary, the young lawyer that Alicia beat out last year for the position of junior associate at the firm, and who subsequently jumped ship and started working for the state's attorney's office.)

The show's first season was quite strong, and I don't think it has flagged much in its sophomore year, despite some predictable plot twists (Peter moving back in with Alicia, Alicia winning a spot at the firm as a junior associate after 13 years out of the courtroom) and a wearying familiar rhythm to the legal stories. The courtroom stuff is well-done but far from earthshaking; the details may be fresh, but you've seen the basic template a million times. The real draw is the scene-to-scene development of Alicia, who's written and performed with impressive concentration and insight. Margulies has a gentleness and opacity that reads as blankness at first (a good quality for a leading character, but one that's easy to denigrate as woodenness). It's only when you look back over the entire run of the show that you start to appreciate the full range of Alicia's evolution. In the pilot episode she was a damaged person with a scared-rabbit look; it seemed as though she had to summon immense will just to speak. She's stronger and livelier now, but there's still a wariness and watchfulness that comes from having her dirty laundry aired in public.

We also get a strong sense that Alicia (and other major female characters) are keenly aware of how age and beauty affect women's prospects and sense of self-worth. The series is very good about slipping insightful point-of-view shots into otherwise expository scenes -- moments where Alicia notices how a man in the room is looking at her, or at another woman, or how two women are quietly sizing each other up, measuring each other physically while perhaps silently cursing themselves for succumbing to that instinct. Whether Alicia is bantering with the firm's chief investigator, Kalinda Sharma (Archie Panjabi), flirting with her old college classmate turned mentor Will Gardner (Josh Charles) or trying to please and impress Will's fellow senior partner Diane Lockhart (the incomparable Christine Baranski), you can sense the calculations beneath the easygoing facade -- the resentment at Peter for derailing her professional life and temporarily decimating her personal life, then trapping her into supporting him; her annoyance at herself for feeling attracted to Peter anyway, partly because of the weight of their shared history; her fear that that the wrong word, the wrong move, could set her back again. She felt powerless after her husband's scandal; the true narrative of the series is about Alicia recovering her dignity, and patiently constructing a mental and emotional fortress that will prevent it from being taken from her again.