The powerful law firm at the center of the WikiLeaks plot 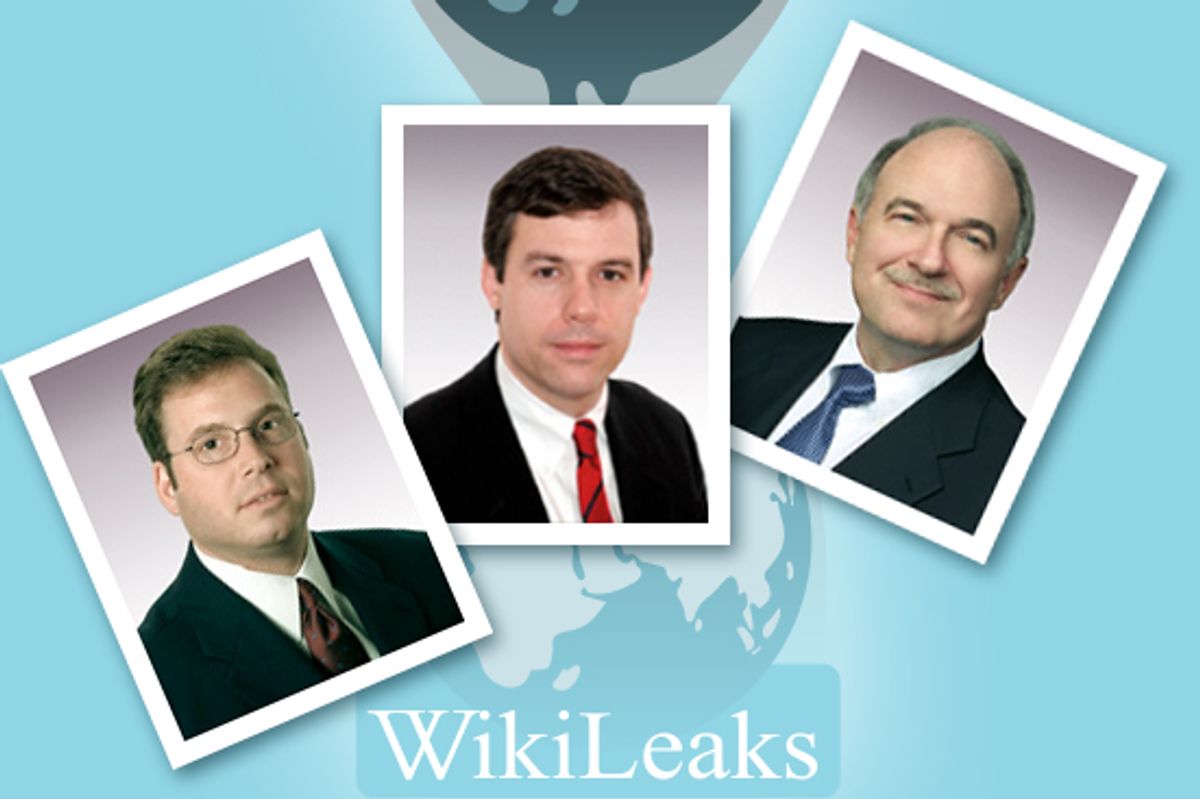 One of the big outstanding questions in the story of the plot to undermine WikiLeaks and Salon's Glenn Greenwald, as well as a separate plan to discredit critics of the Chamber of Commerce, is the nature of the role played by the large international law firm Hunton & Williams.

Hunton, which brags it employs 1,000 lawyers in 18 offices on three continents, has worked for both the Chamber and Bank of America. The company is nervous because WikiLeaks is reportedly planning to release internal bank documents, and Bank of America apparently connected with Hunton to help respond to the crisis.

Hunton attorneys in turn had a series of e-mail communications -- since hacked by WikiLeaks supporters and published online -- with a trio of technology firms that proposed various schemes to attack WikiLeaks, Greenwald and critics of the Chamber. (One typical idea was to provide labor activists with false documents in order to discredit them.)

Unlike the Chamber and Bank of America, which have issued statements denying any responsibility for the attack plans, Hunton has been conspicuously silent. The firm did not respond to requests for comment from Salon last week. And the three specific attorneys at the firm who were involved in the episode have not responded to my requests for comment today. So now is a good time to look at the firm and the rarefied space it occupies in the legal world.

What makes Hunton's involvement in the anti-WikiLeaks scheming so striking is that the firm represents some of the biggest names in corporate America. Hunton's website touts its representation of Wells Fargo, Altria (aka Phillip Morris), the telecom Cingular, and defense contractor General Dynamics, among many others.

Hunton also has a big lobbying business in Washington. Its clients include Koch Industries, the private energy giant whose owners fund a range of right-wing and libertarian causes. (See the 2010 lobbying records for Hunton's work for Koch here; it involved fighting climate change legislation.) Other clients include Americans for Affordable Climate Policy, which is funded by the coal industry, the Gas Processors Association, the nuclear power company Entergy, U.S. Sugar Corp., and so on.

Just how well connected is Hunton? According to one of the hacked e-mails from December, Hunton was recommended to Bank of America's general counsel by none other than the U.S. Department of Justice. I have an inquiry in with the DOJ about this and will update if I hear back. As an employee of Palantir, one of the three tech firms involved in hatching the anti-WikiLeaks plan, put it:

DOJ called the GC of BofA and told them to hire Hunton and Williams, specifically to hire Richard Wyatt who I'm beginning to think is the emperor. They want to present to the bank a team capable of doing a comprehensive investigation into the data leak.

The man mentioned in the e-mail, Richard Wyatt, is the co-chief of Hunton's litigation group. As ThinkProgress pointed out, Wyatt is the Chamber of Commerce's attorney in its lawsuit against the Yes Men, who infuriated the business group by posing as Chamber officials in a 2009 prank.

The Hunton attorney who appears most frequently in the trove of e-mails is John W. Woods, who, according to his Hunton bio, "regularly counsels clients on ... electronic surveillance" and "has a particular focus in advising corporations in the legal response to network security intrusions and data breaches."

Woods corresponded with HBGary executive Aaron Barr about a proposal to attack Chamber critics. In one exchange, after Barr had produced some information about the family of another Hunton partner to prove his social media research prowess, Woods responded:

Thanks.  I am not sure I will share what you sent last night - he might freak out.  I will advise him that he may want to look at his facebook material.  If you really want to impress Richard [Wyatt], I would look at the following web-site and tell him something about the guys behind it:

Barr responded with some links to social media pages of an official at the anti-Chamber group, noting that the official and his family "go to a Jewish Church in in DC, the Temple Micah."

The third Hunton attorney who appears in the e-mails is Robert "Bob" Quackenboss, a trial lawyer who specializes in helping corporations fight labor. He has worked on "public communications response to union-coordinated attack campaigns," counseled "employers on practical global labor relations strategies, collective bargaining and management of union elections," and even arranged for "physical security" for corporations targeted by unions. Quackenboss was said to be the "key client contact" with the Chamber as Hunton developed plans and talked about fees with the three tech firms.

The key outstanding questions are: Will Hunton continue to decline comment on this episode? And will the Chamber and Bank of America continue to retain Hunton? We'll keep you posted.