Middle-earth according to Mordor 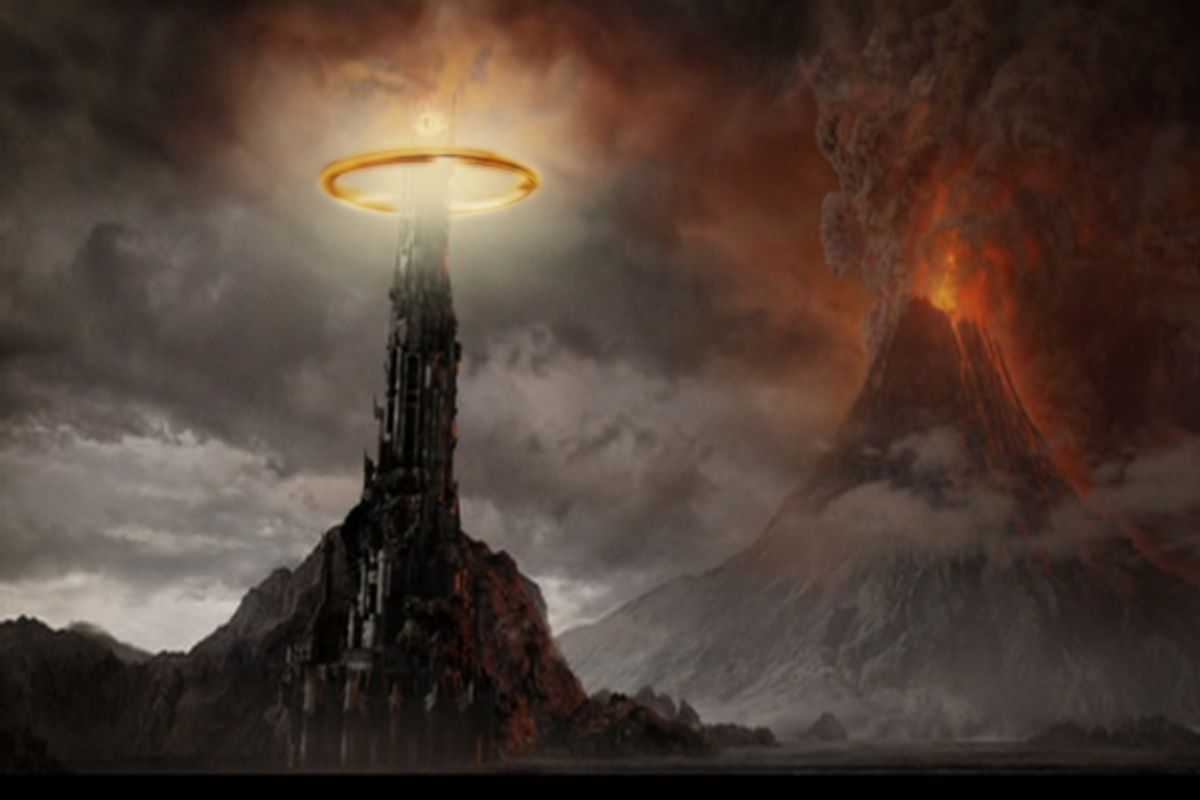 As bad lots go, you can't get much worse than the hordes of Mordor from J.R.R. Tolkien's "The Lord of the Rings." Led by an utterly evil disembodied entity who manifests himself as a gigantic, flaming, pitiless eye, and composed of loathsome orcs (or goblins), trolls and foreigners, Mordor's armies are ultimately defeated and wiped out by the virtuous and noble elves, dwarfs, ents and human beings -- aka the "free peoples" -- of Middle-earth. No one sheds a tear over Mordor's downfall, although the hobbit Sam Gamgee does spare a moment to wonder if a dead enemy soldier is truly evil or has simply been misguided or coerced into serving the dark lord Sauron.

Well, there's two sides to every story, or to quote a less banal maxim, history is written by the winners. That's the philosophy behind "The Last Ringbearer," a novel set during and after the end of the War of the Ring (the climactic battle at the end of "The Lord of the Rings") and told from the point of view of the losers. The novel was written by Kirill Yeskov, a Russian paleontologist, and published to acclaim in his homeland in 1999. Translations of the book have also appeared in other European nations, but fear of the vigilant and litigious Tolkien estate has heretofore prevented its publication in English.

That changed late last year when one Yisroel Markov posted his English translation of "The Last Ringbearer" as a free download. Less polished translations of brief passages from the book had been posted earlier on other sites, but Markov's is the "official" version, produced with the cooperation and approval of Yeskov himself. Although the new translation's status as a potential infringement of the Tolkien copyright remains ambiguous, it may be less vulnerable to legal action since no one is seeking to profit from it.

The novel still has some rough edges -- most notably, a confused switching back and forth between past and present tense in the early chapters -- and some readers may be put off by Yeskov's (classically Russian) habit of dropping info-dumps of military and political history into the narrative here and there. For the most part, though, "The Last Ringbearer" is a well-written, energetic adventure yarn that offers an intriguing gloss on what some critics have described as the overly simplistic morality of Tolkien's masterpiece.

In Yeskov's retelling, the wizard Gandalf is a war-monger intent on crushing the scientific and technological initiative of Mordor and its southern allies because science "destroys the harmony of the world and dries up the souls of men!" He's in cahoots with the elves, who aim to become "masters of the world," and turn Middle-earth into a "bad copy" of their magical homeland across the sea. Barad-dur, also known as the Dark Tower and Sauron's citadel, is, by contrast, described as "that amazing city of alchemists and poets, mechanics and astronomers, philosophers and physicians, the heart of the only civilization in Middle-earth to bet on rational knowledge and bravely pitch its barely adolescent technology against ancient magic."

Because Gandalf refers to Mordor as the "Evil Empire" and is accused of crafting a "Final Solution to the Mordorian problem" by rival wizard Saruman, he obviously serves as an avatar for Russia's 20th-century foes. But the juxtaposition of the willfully feudal and backward "West," happy with "picking lice in its log 'castles'" while Mordor cultivates learning and embraces change, also recalls the clash between Europe in the early Middle Ages and the more sophisticated and learned Muslim empires to the east and south. Sauron passes a "universal literacy law," while the shield maiden Eowyn has been raised illiterate, "like most of Rohan's elite" -- good guys Tolkien based on his beloved Anglo-Saxons.

The protagonist of "The Last Ringbearer" is a field medic from Umbar (a southern land), who is ably assisted by an Orocuen -- that is, orc -- scout, who is not a demonic creature like the orcs in "The Lord of the Rings," but an ordinary man. They're given the task of destroying a mirror in the elf stronghold of Lorien before the elves can further use it to infect Middle-earth with their alien magic. Meanwhile, the remnants of Mordor's civilization fight a rear-guard guerrilla campaign to sustain the "green shoots of reason and progress," in opposition to the "static" and "tidy" pseudo-paradise of Middle-earth under the elven regime.

Some of the supporting characters from "The Lord of the Rings" -- such as Faramir and Eowyn -- get more attention and and even a bit more respect in "The Last Ringbearer." Others, like Aragorn -- depicted by Yeskov as a ruthless Machiavellian schemer who is ultimately the puppet of his wife, the elf Arwen -- have been completely transformed. (Still others, like the hobbits, don't even exist.) Nevertheless, the primary characters are entirely Yeskov's inventions, presented in a radically rethought version of Tolkien's world. The novel is clearly dependent on Tolkien's creation, but it's also original and ingenious.

Some Tolkien fans have dismissed "The Last Ringbearer" as nothing more than fan fiction, although it certainly doesn't conform to the stereotype of fan fiction as fantasies of unlikely romantic pairings among "canonical" characters as imagined by teenage girls. What the novel most closely resembles is "Wind Done Gone" by Alice Randall, a retelling of Margaret Mitchell's "Gone With the Wind" from the perspective of a slave born on Scarlett O'Hara's plantation. "Wind Done Gone" was published in 2001, prompting a copyright infringement suit from Mitchell's estate. Randall, who is African-American, and her publisher mounted a defense resting in part on the argument that "Wind Done Gone" is a "parody," intended to highlight the retrograde racial attitudes and historical distortions in Mitchell's misty-eyed depiction of the Old South.

It should be said on behalf of "The Last Ringbearer" that it is superior to "Wind Done Gone" as both literature and entertainment. The two books do, however, have similar agendas. In Yeskov's scenario, "The Lord of the Rings" is a highly romanticized and mythologized version of the fall of Mordor, perhaps even outright propaganda; "The Last Ringbearer" is supposed to be the more complicated and less sentimental true story.

The inhuman nature of the orcs and Tolkien's depiction of Mordor's human allies as swarthy-skinned outsiders has prompted complaints that his book obscures the moral conundrums of warfare and dabbles in racial demonization. The American critic Edmund Wilson described "The Lord of the Rings" as a children's book that had "somehow got out of hand" and "juvenile trash," in large part for such reasons. Others, like the novelist Michael Moorcock, have attacked Middle-earth as a childishly rose-tinted vision of the Merrie Olde England that never was, as well as willfully blind to the hardships and injustice of preindustrial and feudal societies.

"The Lord of the Rings" wouldn't be as popular as it is if the pastoral idyll of the Shire and the sureties of a virtuous, mystically ordained monarchy as embodied in Aragorn didn't speak to widespread longing for a simpler way of life. There's nothing wrong with enjoying such narratives -- we'd be obliged to jettison the entire Arthurian mythos and huge chunks of American popular culture if there were -- but it never hurts to remind ourselves that it's not just their magical motifs that makes them fantasies.

Yeskov's "parody" -- for "The Last Ringbearer," with its often sardonic twists on familiar Tolkien characters and events, comes a lot closer to being a parody than "Wind Done Gone" ever did -- is just such a reminder. If it is fan fiction (and I'm not sure I'm in a position to pronounce on that), then it may be the most persuasive example yet of the artistic potential of the form.

Books J.r.r. Tolkien The Lord Of The Rings