What makes luxury condoms so luxurious?

A burgeoning industry of fancy rubbers poses the question: What's the difference? It's all about the package 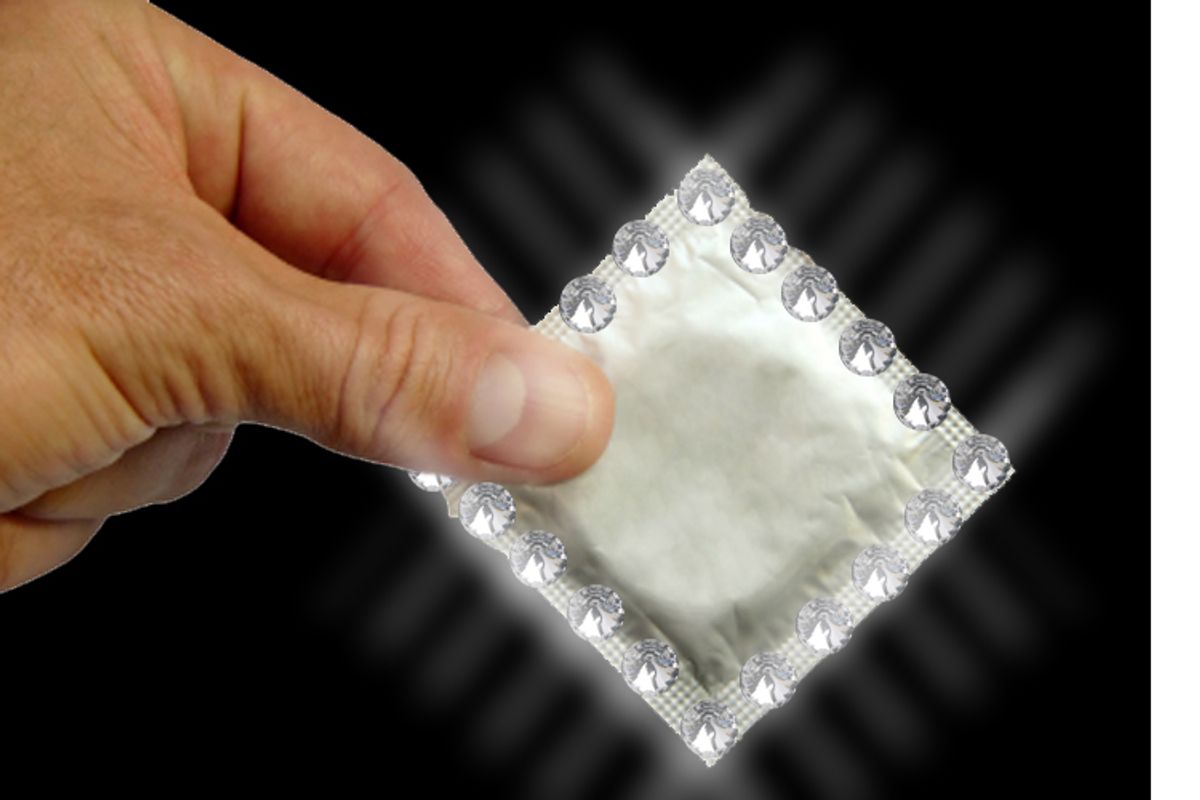 It's a special occasion and things are heating up. The lights are dim, the mood is sultry, the champagne is expensive. Everything about your date has been lavish. The flowers, the dessert, the cab fare. When you've splurged for everything else -- three-figure dinner, two-figure haircut -- why settle for a cheap condom? Why not splurge, throw down an extra buck for a luxury condom?

On most days, I'd say they're all about the same. Your standard Trojan in the burnt orange package fits the same specs as the Durex, which is about the same as the Lifestyles, etc., etc. Unless you're allergic to latex, into contraceptives that glow in the dark, or like your rubbers to look like an ice cream cone, the basic condom is effective at least 90 percent of the time. But what consumers overlook in price and quality they find in marketing. Enter the cottage industry in luxury condoms.

Sir Richard's and the Original Condom Co. claim to offer better, swankier condoms. Sir Richard's condoms come in graphic-designy wrappers and the name implies some sort of English elegance. Original Condom offers a more sophisticated box that -- perhaps inconveniently -- looks like an engagement ring case. Both brag about the superior quality of their latex, the rigor of the tests, and the number of product-standard-approval stamps they've garnered. And you know what, the whole package is kind of compelling.

Aside from the above gimmicks, paying a little extra for luxury condoms provides a social incentive. Sir Richard's does a Tom's shoes sort of thing with its condoms: For each condom you buy, it sends a condom to a developing country to help fight the spread of disease. Inspired by Paul Farmer's work in Haiti, founder Mathew Gerson said the company set out to fill a demand in the U.S. market, but also address a pressing global issue. He told Gothamist:

I had found out through some side-interest in the HIV pandemic [that] there is this massive need-gap for free condoms globally ... We wanted to address this need gap with a one-for-one model where we will make one condom available for free for people who cannot afford them. The idea being that safe sex should be a human right, and if people want to have safe sex they should have the opportunity to practice it regardless of the economic condition.

All that and the condoms are vegan. (Evidently normal condoms contain casein, a dairy byproduct.)

In an increasingly David Brooks-style bobo universe, products depend less on the specific function or basic role. Consumers who can afford it don't just look for milk that's drinkable, but rather, milk that's organic, non-pasteurized, sold under fair trade standards at the Park Slope Co-op. Condoms that save lives in Haiti and don't hurt animals were bound to be a coda to the sustainable, social-good revolution of the last decade.

But do they feel different? We let the old guard do the hands-on test.

In observance of Valentine's Day, Newsweek's staff talked with the founders of the Original Condom Co., two self-identified French aristocrats who've based their company in Condom, France. The two men indeed looked sophisticated, but the Newsweek staff didn't seem to notice much difference in their product in the (inappropriate?) interoffice product review -- which included a taste test. Generally speaking, Newsweek journalists seemed confused. One woman asked, "Why would you need a luxury condom? It makes your penis feel special?" But what happens when you're pressed, live in New York and can't afford a condom at all? There's an app for that.