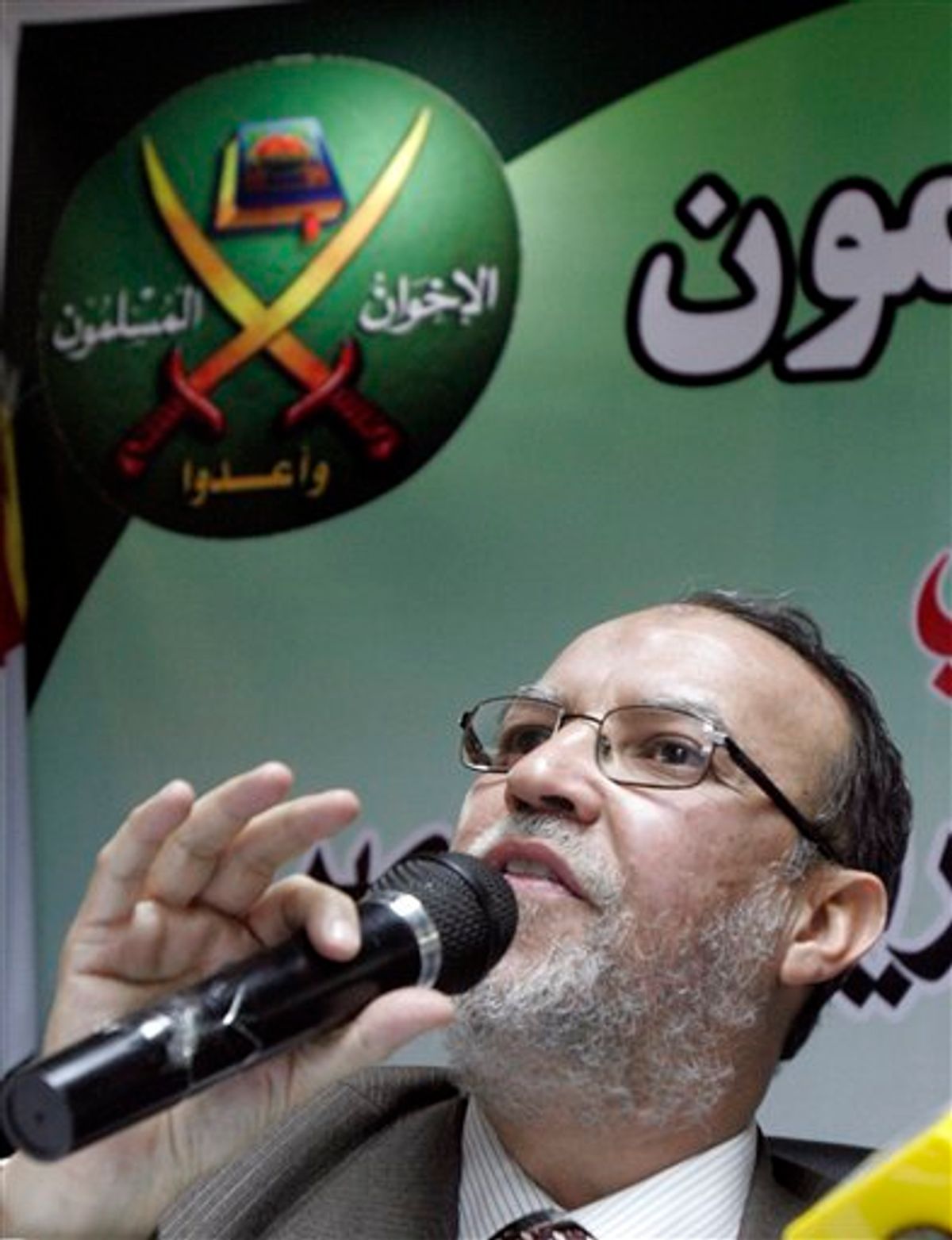 Egypt's long banned Muslim Brotherhood said Tuesday it intends to form a political party once democracy is established, as the country's new military rulers launched a panel of experts to amend the country's constitution enough to allow democratic elections later this year.

The panel is to draw up changes at a breakneck pace -- within 10 days -- to end the monopoly that ousted President Hosni Mubarak's ruling party once held, which it ensured through widespread election rigging.

The initial changes may not be enough for many in Egypt calling for the current constitution, now suspended by the military, to be thrown out completely and rewritten to ensure no one can once again establish autocratic rule. Two members on the panel said the next elected government could further change the document if it choses.

The military's choices for the panel's makeup were a sign of the new political legitimacy of the Muslim Brotherhood, the fundamentalist group that was the most bitter rival of Mubarak's regime. Among the panel's members is Sobhi Saleh, a former lawmaker from the Brotherhood who is seen as part of its reformist wing.

The eight-member committee held its opening meeting with Defense Minister Hussein Tantawi on Tuesday. The panel includes three judges from the Supreme Constitutional Court -- one of them a Christian -- and legal experts, one of its members, scholar Mohammed Hassanein Abdel-Al, told The Associated Press.

The panel is headed by Tareq el-Bishri, considered one of Egypt's top legal minds. A former judge, he was once a secular leftist but became a prominent thinker in the "moderate Islamic" political trend. He is respected on both sides as a bridge between the movements.

The panel's convening indicated the military was trying to push ahead quickly with a transition after Mubarak resigned Friday in the face of 18 days of unprecedented popular protests that massed hundreds of thousands. The military is now also urging an end to labor strikes that spread wildly across the country Sunday and Monday, unleashed by the turmoil.

The dozens of strikes, many hitting state agencies and industries, are a further blow to Egypt's economy, damaged by the three weeks of upheaval.

The strikes eased Tuesday, mainly because an Islamic holiday meant state offices and businesses were closed. Still, smaller protests by hundreds continued in at least seven provinces outside Cairo, including by government workers and police over pay. Fishermen in the Nile Delta demanded an end to restrictions on where they can fish in a lake north of the capital. Sugar cane growers in the southern city of Luxor demonstrated demanding higher prices for their crops.

Throughout Mubarak's rule, his regime kept a stranglehold on Egyptian politics.

Any opposition parties had to be approved by a commission run by his ruling National Democratic Party. The constitution stiffly restricts who can run for president, preventing a real challenger. It also lifted almost all independent supervision of elections, opening the door to vote rigging that ensured the most recent parliament -- now dissolved -- was almost entirely made up of Mubarak's ruling party.

As a result, the existing political parties are hollow shells, with little public following. The constitution also explicitly bans any parties formed on a religious basis.

The Muslim Brotherhood, banned since 1954, could not form a party but ran candidates for parliament as independents. In 2005, it made a surprisingly strong showing, winning 20 percent of parliament's seats. But it was pushed out completely in the most recent election in November and December, plagued by fraud.

The Brotherhood announced Tuesday that it would form a party once promised freer laws are in place.

Essam el-Arian, a senior leader in the Brotherhood, said the movement would not run any candidate for upcoming presidential elections, acknowledging that such a move would be too controversial.

"We are not going to have a candidate for the upcoming presidential elections. Its time for solidarity, its time for unity, in my opinion we need a national consensus," he said. But he said the Brotherhood's top leadership had decided on the creation of a party.

The Brotherhood seeks an Islamic state in Egypt, and Mubarak's regime depicted it as aiming to take over the country, launching fierce crackdowns on the group. Some Egyptians remain deeply suspicious of the secretive organization, fearing it will exploit the current turmoil to vault to power.

But others -- including the secular, liberal youth activists who launched the anti-Mubarak uprising -- say the Brotherhood has to be allowed freedom to compete in a democracy alongside everyone else. Support by young cadres in the Brotherhood was key to the protests' success, providing manpower and organization, though they never came to form a majority in the wave of demonstrations.

The new constitutional panel is mandated to draw up amendments within 10 days to be put to a referendum, paving the way for elections. The military specified six articles to be amended or thrown out "along with changes to any connected articles that the committee deems necessary," according to the military's statement to the panel, read to The Associated Press by Abdel-Al.

"This is a critical moment and things have to be dealt with on a priority basis," Abdel-Al said of the decision to focus on those select articles, which are the main ones imposing restrictions on elections and allowing the president to run as many times as he wants. "This is a preliminary requirement to hold free democratic elections ... our task is to make it feasible for that to happen."

"The future parliament and government can decide whether to make further amendments or rewrite the whole thing," he said.

Saleh, the Brotherhood member on the panel, said the goal was to "cleanse" the constitution to ensure freedom of political parties and other rights ahead of the election. "After the transition to a democratic life and freedoms, parties and political forces can get together and work on a complete constitution," he said.

The Armed Forces Supreme Council, grouping the defense minister and top generals, has vowed to hand over power to an elected civilian government. It has dissolved parliament and suspended the constitution -- steps that encouraged protest leaders because both were pillars of the Mubarak regime. But it has kept in place the last government installed by Mubarak as a caretaker until a new one is named.

On Monday, the coalition of activists who organized the protest movement pushed the military for further steps. In a list of demands Monday, they called for the dissolving of Mubarak's National Democratic Party and for the creation of a Cabinet of technocrats within 30 days. They want it to replace the current caretaker government.

"It is unacceptable that the same government which caused this revolution with its corrupt ways oversees the transitional period," said Ziad al-Oleimi, a member of the coalition.

Protesters in Tahrir Square, the symbolic heart of the uprising, have emptied the area, with the military stepping in to pack up tents and blankets in the past two days and asking people to leave. The activists' coalition called for an official end to its demonstrations, in a gesture to the interim leadership. But protest organizers are planning a new mass demonstration on Friday, seeking to bring 1 million to the square to call for the meeting of their demands -- including the release of political detainees and the cancellation of emergency laws.

In a rare admission Sunday, the new interior minister in the caretaker government said there may be about 10,000 political prisoners in Egyptian prisons, and that he is reviewing their files. His comments were published in the daily Al-Masry Al-Youm on Monday. The number includes opponents jailed for years under Mubarak's regime.