Iranian lawmakers: Opposition leaders should be put to death 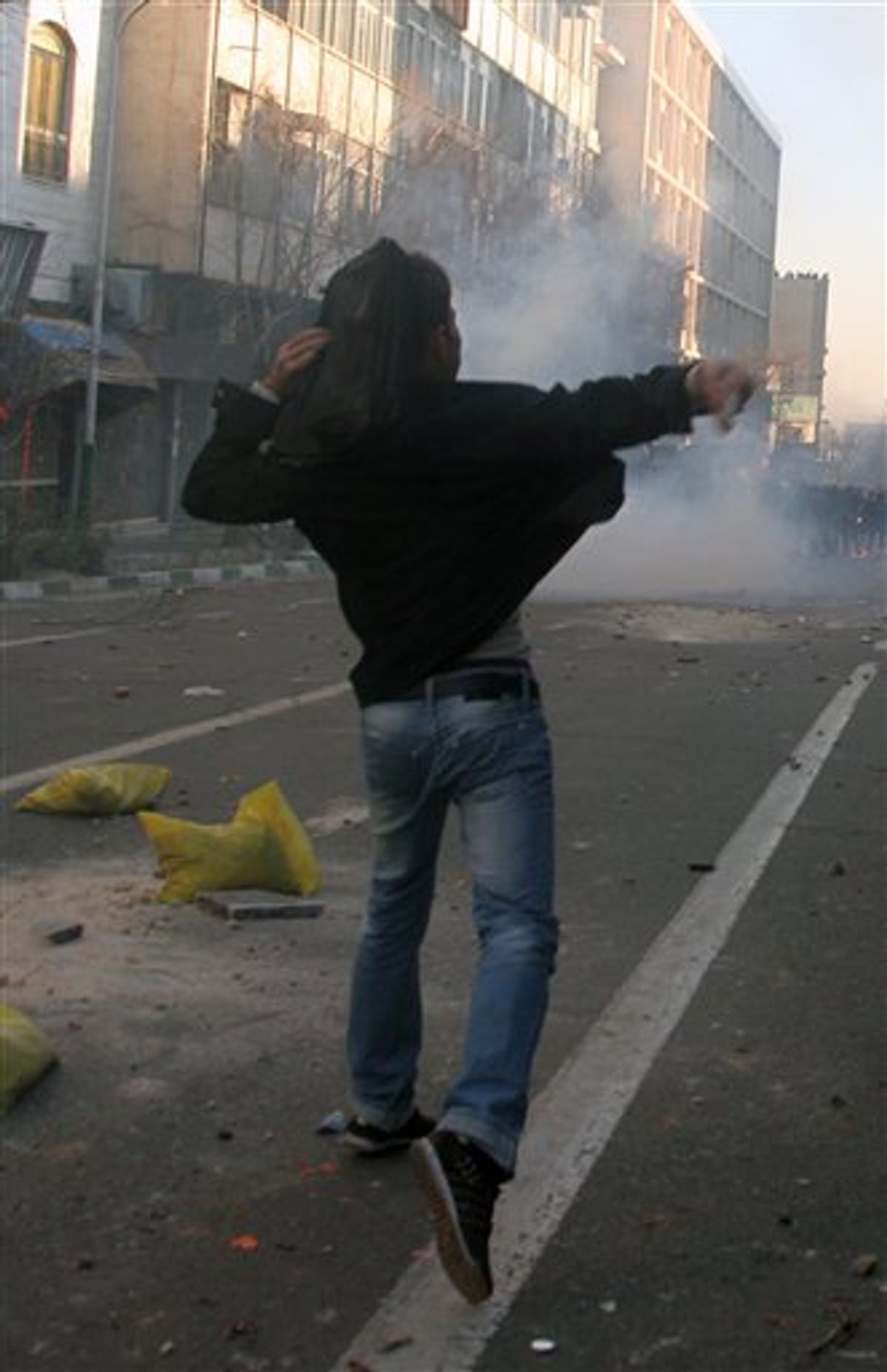 This photo, taken by an individual not employed by the Associated Press and obtained by the AP outside Iran shows an Iranian protestor throwing stone at ant-riot police officers, during an anti-government protest in Tehran, Iran, Monday, Feb. 14, 2011. Eyewitnesses report that sporadic clashes have erupted in central Tehran's Enghelab or Revolution square between security forces and opposition protesters. The demonstrators were chanting "death to the dictator," referring to the country's hardline president that the opposition believes was reelected through fraud in 2009. (AP Photo) EDITORS NOTE AS A RESULT OF AN OFFICIAL IRANIAN GOVERNMENT BAN ON FOREIGN MEDIA COVERING SOME EVENTS IN IRAN, THE AP WAS PREVENTED FROM INDEPENDENT ACCESS TO THIS EVENT (AP)
--

Hardline Iranian lawmakers called on Tuesday for the country's opposition leaders to face trial and be put to death, a day after clashes between opposition protesters and security forces left two people dead and dozens injured.

Tens of thousands of people turned out for the opposition rally Monday in solidarity with Egypt's popular revolt that toppled President Hosni Mubarak after nearly 30 years in power. The demonstration was the first major show of strength from Iran's beleaguered opposition after canceling planned rallies for the past year when authorities refused permission.

In Washington, President Barack Obama criticized the Iranian government for its harsh treatment of protesters and noted the irony of its support for Egypt's uprisings while repressing demonstrators at home.

Pumping their fists in the air, the lawmakers chanted "death to Mousavi, Karroubi and Khatami."

"We believe the people have lost their patience and demand capital punishment" for the opposition leaders, 221 lawmakers said in a statement.

Hardliners have long sought to put senior opposition figures on trial, but the calls for the death penalty signaled an escalation in their demands.

Parliament formed a special committee to review the case and decide in coming days about how the government should deal with the opposition leaders.

Iran has already tried scores of opposition figures and activists on charges of fomenting the mass protests following the country's disputed 2009 presidential elections that saw Mahmoud Ahmadinejad win a second term. More than 80 of people were sentenced to prison terms ranging from six months to 15 years.

The opposition says scores were killed in the massive crackdown on those protests, while the government says only around 30 people died.

Obama was asked at a White House news conference about the mood of change sweeping the Middle East following the uprisings in Cairo and he singled out Iran's attitude.

Iranian leaders had sought to portray the toppling of Zine El Abidine Ben Ali in Tunisia and Hosni Mubarak in Egypt, both secular leaders, as Islamic uprisings.

Following Monday's opposition demonstrations, the first since December 2009, authorities vowed to move quickly to stifle the opposition before its gains momentum.

"The judiciary will quickly and resolutely deal with major elements and those who violated public order and peace," the spokesman for Iran's judiciary and state prosecutor, Gholam Hossein Mohseni Ejehi, told the official IRNA news agency.

The U.S. has voiced support for the demonstrators. Secretary of State Hillary Rodham Clinton said Monday the protesters "deserve to have the same rights that they saw being played out in Egypt and are part of their own birthright."

IRNA quoted the security chief for Iran's Culture Ministry, Gholam Ali Zarei, as saying Sane Jaleh, a 26-year-old student at Tehran's University of Art, was killed. He described him as a government supporter.

Later in the day, Kazem Jalali spokesman of the parliamentary committee on national security and foreign policy told the semiofficial Ilna news agency that one of the injured also died. The victim was not identified.

Acting police commander Gen. Ahmad Reza Radan told IRNA that several people were arrested, but did not specify how many.

Radan claimed that members of the Iranian opposition group Mujahedeen Khalq, opened fire at police and protesters, IRNA said. He did not provide any evidence to back up his claim.

He also accused the U.S., Britain and Israel of stoking the protests -- a common allegation from officials in Tehran following any unrest in Iran.