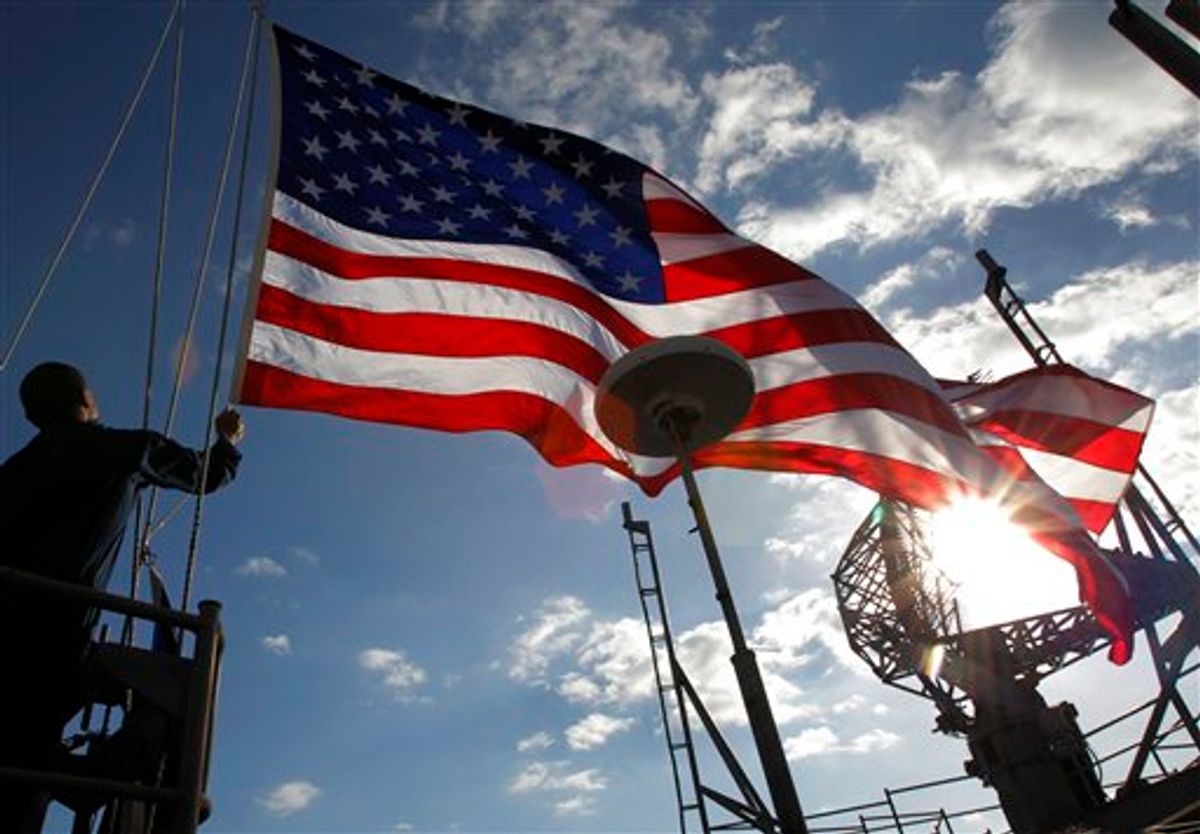 FILE - In this Dec. 10, 2010 file photo, a U.S. Navy crew hoists the Stars and Stripes on the USS George Washington during "Keen Sword" U.S.-Japan joint military exercise over the Pacific Ocean. Further U.S.-Japan drills are being held late January through early February in Japan. Even as American and Chinese leaders talked up the need for closer ties in two high-profile visits this month, the U.S. and its Asian allies are quietly boosting their defenses.(AP Photo/Itsuo Inouye, File) (AP)
--

A group of U.S. veterans who say they were raped, insulted and otherwise abused by their comrades want to force the Pentagon to change how it handles such cases.

More than a dozen female and two male current or former service members say servicemen get away with rape and other sexual abuse and victims are too often ordered to continue to serve alongside those they say attacked them.

In a federal class-action lawsuit to be filed Tuesday, they want an objective third party to handle such complaints because individual commanders have too much say in how allegations are handled.

The alleged attackers in the lawsuit include an Army criminal investigator and an Army National Guard commander. The abuse alleged ranges from obscene verbal abuse to gang rape.

In one incident, an Army Reservist says two male colleagues raped her in Iraq and videotaped the attack. She complained to authorities after the men circulated the video to colleagues. Despite being bruised from her shoulders to elbows from being held down, she says charges weren't filed because the commander determined she "did not act like a rape victim" and "did not struggle enough" and authorities said they didn't want to delay the scheduled return of the alleged attackers to the United States.

"The problem of rape in the military is not only service members getting raped, but it's the entire way that the military as a whole is dealing with it," said Panayiota Bertzikis, who is a plaintiff in the lawsuit and claims she was raped in 2006. "From survivors having to be involuntarily discharged from service, the constant verbal abuse, once a survivor does come forward your entire unit is known to turn their back on you. The entire culture needs to be changed."

Although The Associated Press normally does not identify the victims of sexual assault, the plaintiffs in the lawsuit have publicly discussed the cases.

Bertzikis, 29, of Somerville, Mass., now is executive director of the Military Rape Crisis Center. She says she was raped by a Coast Guard shipmate while out on a social hike with him in Burlington, Vt. Bertzikis complained to her commanding officer, but she said authorities did not take substantial steps to investigate the matter. Instead, she said, they forced her to live on the same floor as the man she had accused and tolerated others calling her a "liar" and "whore."

Pentagon spokeswoman Cynthia Smith said she hasn't seen the lawsuit and couldn't comment on any issues in pending litigation.

Smith said the military had already planned to roll out a new hotline victims can call in April. It has another initiative that encourages service members to help those who are assaulted or raped. In 2005, the military created an office charged with preventing sexual assault. Victims can opt to file a "restricted" or confidential report that allows them to get medical attention without an investigation being triggered.

"We are aggressively doing everything we can because one sexual assault is too many," Smith said.

In many of the described cases, like Bertzikis', no charges were filed. In other cases, the alleged attackers faced lesser charges and were allowed to remain in the military, according to the lawsuit.

Kori Cioca, 25, of Wilmington, Ohio, described being hit in the face by a superior in one incident in 2005 and being raped by the same man in a second incident soon after while serving in the Coast Guard in Bay City, Mich.

Even though the man confessed to having sex with her, Cioca said in the lawsuit she was told if she pressed forward with reporting the sex as a rape, she would be court-martialed for lying. She said the man pleaded guilty only to hitting her and his punishment was a minor loss of pay and being forced to stay on the base for 30 days. She said she was discharged from the military for a "history of inappropriate relationships."

"You think of a Coast Guardsman, you think of somebody in the military holding themselves at a certain level," Cioca said. "When somebody walks up to you and shakes your hand and says, 'Thank you for your service,' little do they know they're shaking the hand of a man who rapes and beats women in the military. "

She said she continues to suffer from numbness in her jaw and has nightmares.

"My body hurts every day. My face hurts. I get the most horrible headaches. My body has been trespassed. The honor that I had was stripped from me. I'm no longer proud of myself. People tell me thank you for your service, but my service wasn't what it was supposed to be," Cioca said.

Anuradha Bhagwati, 35, executive director of the Service Women's Action Network, said the Defense Department's own statistics show that fewer than one in five of these cases are even referred for court martial. She said unit commanders are the judge and the jury in these types of cases. Too often, she said, perpetrators are given non-judicial punishments.

"A lawsuit like this is needed because change cannot happen on the inside. DoD has had literally decades, perhaps more, to change the culture within the military. They've proven that they can't, and even the minor changes they've made the last few years are so superficial," Bhagwati said.