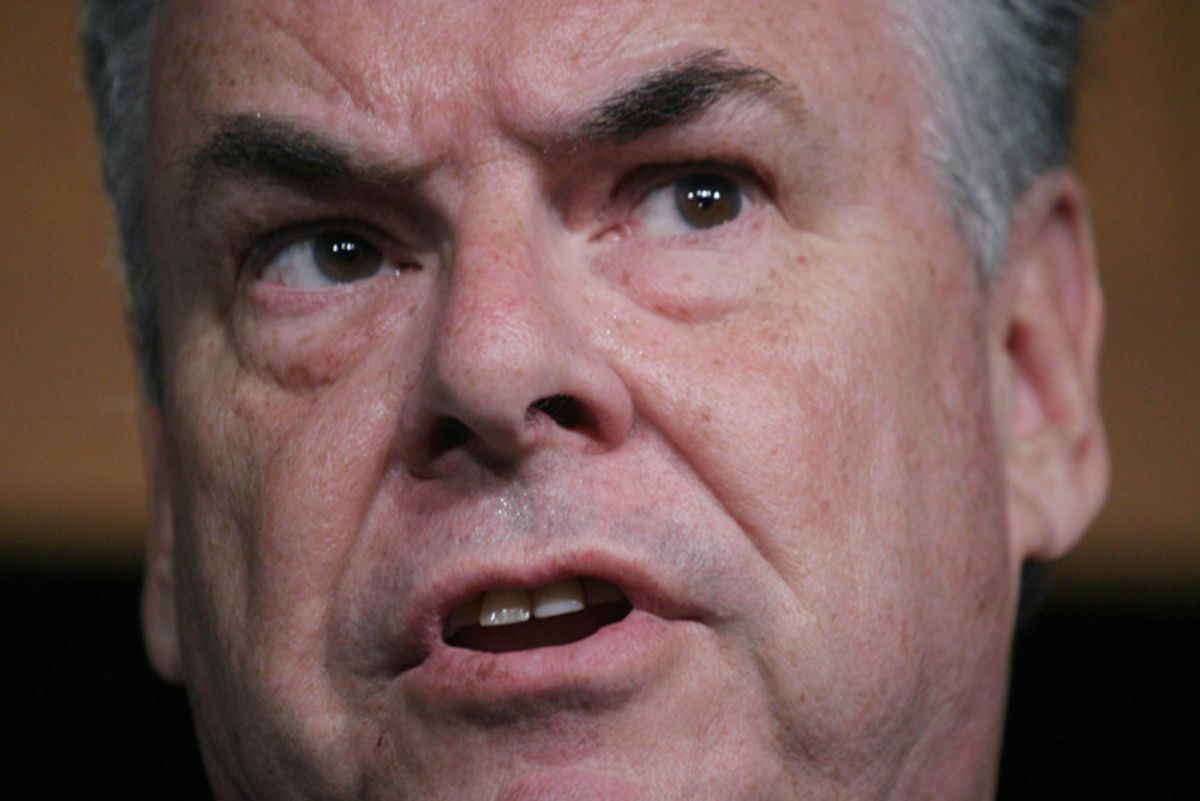 Rep. Peter King (R-N.Y.) is the new chairman of the Homeland Security Committee, and in that capacity he is going to launch a series of modern-day HUAC hearings with American Muslims playing the parts of Commies. It is something he has clearly been very excited about for some time, but now that he's actually in a position to make it happen, he is running up against the fact that reality does not quite conform to his fantasies of millions of home-grown Islamic terrorists waiting for one heroic crusading congressman to weed them out. In an interview with the National Review, he attempts to manage expectations, by making the hearings sound marginally less McCarthyite than he originally promised:

“Look, when I meet with Muslim leaders, people who are successful in their community, it is clear that there is no support for al-Qaeda. I don’t sense that at all.” King says. “What I do sense is that they feel like they are under siege.” That fear, he says, is natural, but unfortunate. “If they did speak out, it would make them a much more positive force.”

So instead of "proving" his wild claims about stymied law enforcement and "80% of mosques" being "radicalized," King is just going to force various Muslim Americans to repeatedly swear their loyalty to America, under oath.

“It is not enough for them to say that they denounce all terrorism, that they denounce all violence,” King says. “They have to be much more aggressive. I don’t think they fully realize that. They worry that if they came out and highlighted their opposition to Islamic terrorism, it would focus too much attention on the Muslim community, reminding people that these terrorists are Muslims. So they don’t deal with it in an open way.”

It's not enough to denounce terrorism! American Muslims must sing "You're a Grand Old Flag" while baking apple pies and tattooing crying eagles on their forearms. Then and only then will Peter King stop calling all of you terrorists.

King also promises to be on his very best behavior, because he certainly doesn't want his Muslim HUAC hearings to be ruined by the ringleader saying something offensive:

King, a high-spirited and argumentative attorney, admits that he, too, will have to simmer down. “I can’t allow myself to say anything that would be misinterpreted,” he says. “I can’t be feeling sorry for myself if I give the mainstream media a sword to use against me; I can’t say something dopey, inane, or not based in fact, or lose my temper. We are going to keep this sensible. As long as this is done in a professional way, I know that I will have John Boehner’s support.”

This is beautiful. Peter King will seriously try his hardest not to say bigoted things, because he doesn't want his boss to get mad at him, but it will obviously be a struggle. It will take superhuman force of will for Peter King to not say stupid things at his hearings. You can do it, Peter!