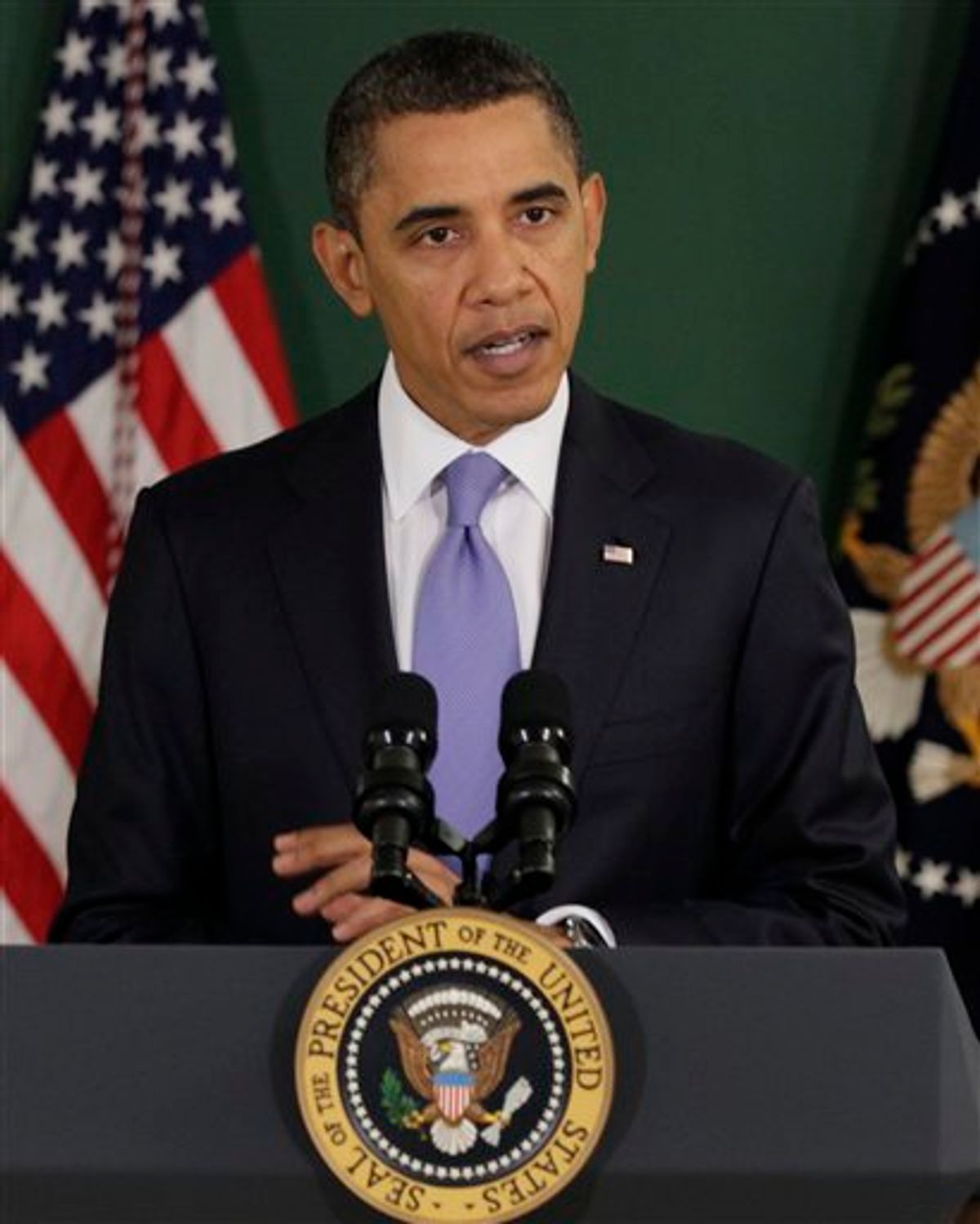 I've held off writing about President Obama's fairly disappointing budget "blueprint" because I mostly agree with Andrew Leonard – it contains some good investments in education and transportation spending, laudable tax hikes on oil companies, as well as some disturbing cuts to programs for low-income and working class Americans. But all of it is largely symbolic, since Congress crafts and passes budgets, and nothing resembling Obama's plan is likely to survive that process.

Still, symbols matter, and I remain uncomfortable with what the president is doing with this budget document, since he's conceding the overall GOP narrative – the deficit is out of control, big-government spending is the problem, and budget-cutting the solution – and as Paul Krugman notes, it surrenders the notion that during this jobs-free economic "recovery," Democrats should fight for a job-creation agenda, even if they have to spend money to do it.

I'm most disturbed by cuts to the program that helps low-income folks with their skyrocketing heating bills, as well as Pell Grants for low-income students to attend summer school and government subsidies that keep graduate students relying on student loans from accruing interest while they're still in school. Demand for heating aid has climbed sharply during the recession; I can't imagine this won't literally leave some low-income Americans out in the cold. On the education front, I'm glad the president is increasing aid to primary and secondary education by roughly 11 percent. But Obama's student-loan-industry reform was in fact one of the most progressive accomplishments of his first two years in office; backtracking on his commitment to expand higher education to more Americans is both sad and politically dumb. That the president who's harking back to the Sputnik era, when the Russian space race inspired a great government-funded advance in American research, development and education, would now make it harder for Americans to afford graduate school seems like a mixed political message, to say the least.

But the place where I have to part company with my friend Andrew Leonard (and he is my friend, I'm not using an empty phrase) is his dismissing Robert Reich for suggesting that people earning over $15 million a year might be taxed at a 70 percent marginal rate – meaning that everything over that astonishing $15 million, not their entire income, would face that tax rate – to pay for a job-creation agenda. That's the rate all income over $215,000 was taxed at when Ronald Reagan took office in 1981. Reagan's tax reforms, it should be noted, took the top rate for married couples down to 50 percent, but for a while the rate kicked in at $162,000, according to the relatively conservative Tax Foundation. When the top marginal rate came down into the 30s after Reagan's final tax cut in 1986, it hit taxpayers making as "little" as $74,000 for a while. So even as Reagan cut top tax rates, he lowered the income-level at which it kicked in, something left out of the story by the "Reagan slashed taxes" hagiographers.

But I should first confess that I know how Andrew feels. When I wrote my piece for Salon's "Real Reagan" series, I cringed a little bit pointing out that the great post-World War II American dream of expanded educational opportunity, home ownership and social mobility was financed by a marginal tax rate that ranged from 94 percent to a low of 70 percent, where it sat when Reagan became office. It seemed politically crazy to endorse tax rates that prevailed under Democrat Harry Truman, as well as Republicans Dwight Eisenhower or even Richard Nixon.

But if left-wing writers like Andrew and Reich and I can't argue for a return to Nixon-era top tax rates, the country's political discourse may be in worse shape than even I thought. Reich is calling for rates for those making $250,000 to $500,000 to rise to close to Clinton-era's 40 percent; between $500,000 and $5 million, to 50 percent; between $5 million and $15 million, to 60 percent. "Even suggesting [those rates] represents such a fundamental disconnect with the world as it exists today that it is hard to see why it should be taken seriously," Andrew argues. adding "I would be deeply worried about the sanity of a Democratic president who proposed such a thing." I think Reich's proposal is at least debatable, even if it's not necessarily advanced by the president in 2011. If no one on the left making bold proposals, the debate will be completely dominated by the bold crackpot pro-wealthy ideologues of the right.

I find myself agreeing with progressive economist Dean Baker: What's most disappointing about Obama's budget proposal is that the president has ceded the role of storyteller-in-chief, the bold leader who explains to Americans exactly which forces destroyed the economy over the last 30 years – the tax and regulation-cutting Republicans (and some Democrats) who made the rules that led to the 2008 economic collapse. Without that larger narrative, Obama may in fact prevail against a Republican field dominated by Crazy and Crazier in 2012. But he won't change the economic and political system that's been dominated by Rich and Richer since Reagan, to the detriment of the rest of us.